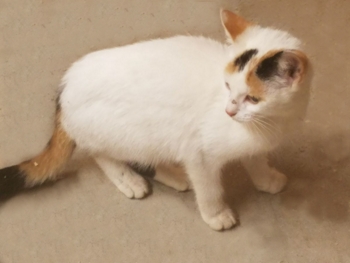 No, They won't be OK and no, they won't survive!

Omg! This poor little guy! He is young and was dropped off somewhere and managed to find his way to my home. He's starving, has a hurt paw and nose, and you people who just drop off your unwanted cats make me so upset!! 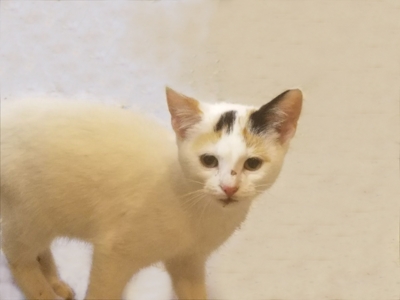 No, they don't survive... A good majority just don't. No, no one else is going to take care of them, even if you do drop them off at the nearest farmhouse, and no, they won't be ok.

This little guy traveled a long ways to get to my house, he got hurt, he was too young to fend for himself, and hasn't stopped eating since I put him in the shed with a bowl of food. 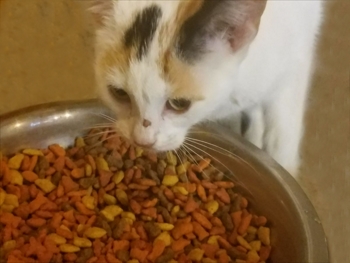 Well, he has, just long enough to come over and get petted/cuddled. He is starving for more than food is what I mean. He has been through a huge ordeal. This is not a full grown cat. He is young and doesn't deserve to be treated this way. 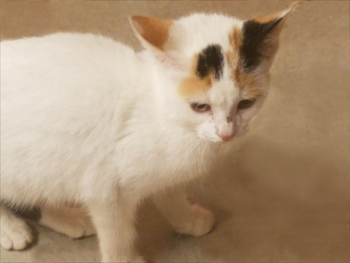 I still have to assess his health, keeping him in the work barn until I know he's ok to mix with my other cats. He's friendly enough, so, he's been around people. Like I said, he's starved for attention. And all he wants to do is eat and cuddle. You can tell he is just grateful someone was there to help him.

I need to give him a name and once I figure out if he's ok, need to find him a home...

If you don't want any more cats...get yours spayed/neutered. This isn't his fault, it's his owners fault. He survived I don't know how long on his own.

Makes me sooo angry! I didn't know whether to put this in the pets or rants forum..I'm too upset to decide. The mods can put it where they wish.

What a bunch of bastards.

I'm glad that one found someone who cares.

Not sure if it was just animal instinct or a superior force who guided the cat straight to the biggest heart around.

I have been working in cat rescue for more than two decades and I know what you are talking about. Right now I've got a formerly feral momma with seven babies, all covered in ringworm and malnourished. She's a purebred Russian Blue. She was someone's kitten they paid way too much money for and then dumped her when she got to be too much trouble.

I spend so much time and money caring for other people's rejected cats that I go without things in order to do so. And no one seems to care. I've even had people leave kittens on my doorstep in boxes. I guess it's good to know they know a place where they'll be safe, but animals should not be disposable.

They're not OK. You're right. Thank you for being another one who will make sure they're OK when their owner decides they can no longer be bothered and throws them away like garbage. There aren't enough of us out there.

posted on Oct, 11 2017 @ 10:45 AM
link
Animal rescuer here. I have way too many cats-all came from awful life-threatening environments. Had many mamas and kittens in terrible condition I had to nourish day and night so they could live. I was so angry at people who threw them out because they got pregnant. Most mamas were too sick to feed their babies so we did it every 30 minutes day and night while healing the mama and her wounds; and the mama was a kitten herself.

Thank God for help from the Humane Society for vet checks etc.

Our country is littered with feral communities; beautiful cats. We now have a program to capture, fix and give shots and release them back to their colonies-as opposed to killing them all in shelters. These are the most beautiful cats I have ever seen but hate and distrust humans.

Our animal control is awful. They just kill animals. Hate them.

Thanks for caring and loving the unloved. It's not easy or easily understood why we do it at our own sacrifice. It's just who we are.

I all too well understand your anger and frustration...

I live on a small farm on a seldom used country road. I can't tell you how many animals have been 'dropped' at my farm in the 25 years I've lived there. Unreal, sometimes entire litters of kittens and puppies. One Sunday I woke up to a full grown Akita dog. As I tried to get to the barn to feed, it attacked my dogs and growled at me. Needless to say, we locked ourselves in the house and called the police, who called the dog warden. It took hours, seeing as it was a Sunday.

NO, they won't be OK. not at all.
And just cause I live on a farm doesn't mean I want them.
Idiots. Irresponsible 'pet owners'

posted on Oct, 11 2017 @ 10:52 AM
link
I have taken in 12 stray/feral/discarded kittens in the last few years . I take care of them , take them to a vet for a checkup and their shots, make sure they settle in well , and adopt em out. No , I am not reimbursed in any way.Will not even take money if forced on me . Well , except for the look on a child's face when they get a kitten .Priceless to me. Most times (as these types of kittens are the most loving) I dont really want to give them away .
I have kept 2 though....

ETA - also get em fixed.
Have never even thought , not once , about the expense.

I cant say how great I feel about you....

We're trying to get a donation center for food going...they've got one for dogs, but not cats. I buy food in bulk at the local feed store...around $35.00 for a forty lbs bag, and it's corn free, so better than the grocery store brands. You might find a similar deal in your area. I was doing the same thing you are before I found out about the feed store.

posted on Oct, 11 2017 @ 11:01 AM
link
ok..so I just brought her in the house. She won't stop meowing..even though her purr is going. Almost like she is so used to crying for help she don't know how not to. And I can't give her enough cuddles. Looks like her back paw may have been punctured through.

originally posted by: theultimatebelgianjoke
a reply to: blend57

I've got two male calicos. Know several others in rescue with males as well. They're not as rare as they used to be. Of course, I'm in a sprawling city where cats are classified as wild animals, so the overpopulation is more profound than in other areas where they consider cats to be domestic animals.

Please make sure she is tested for feline leukemia before she is round your other cats. Very important.
edit on 11-10-2017 by Justso because: (no reason given)

originally posted by: blend57
ok..so I just brought her in the house. She won't stop meowing..even though her purr is going. Almost like she is so used to crying for help she don't know how not to. And I can't give her enough cuddles. Looks like her back paw may have been punctured through.


Does she roll over and let you rub her tummy ? You know the only thing that can do that naturally for most house cats ? Their mother. Otherwise , you may draw back a nub...
Not exactly so with these types...
Most loving animals in the universe. They get extremely attached to a person.

Shhh. Have my eyes watering from "allergies" . Now , wheres that tissue ? Or some eyedrops where I can have a legitimate excuse.
The weird thing ? Till I "met" my first little feral kitten , I didnt even like cats...

I grew up in the deep, rural south and pets were relegated to the farm — big no-no having any of the animals inside the house if dad was around. One day, on the way back from grabbing some SC peaches, Mom stopped the car just as we crossed the NC border and got out. She had seen a kitten on the way to the stand and on the way back it was still there. Long story short, that kitten ended up living 22 years and was my dad’s ‘pet’. There were two places you could find “Bocephus” (dad was a Hank Jr fan): in front of the fridge or in my dad’s lap. It’s crazy how profound of an effect a pet can have on someone and just how much they truly are a part of the family.

You are awesome blend.

I would name him Chance the Cat.

Over the following five years I encountered three cats on the property who were obviously pets dumped by sh*thead owners. The first two were tiny kittens and it was the dead of winter.

I took them in, vetted them, and welcomed them to the family. They were wonderful little boys.

The third showed up one spring and was a real lovebug. I was very conflicted as I already had three cats in a small house, but this boy would not give up. So I vetted him and brought him in. Turns out he, apparently, hadn't gone into the barn proper where the food was out for the farm cats. He'd been eating bark for about two weeks.

I was horrified and felt very guilty about being conflicted, but was relieved I'd taken him in.

My message to people who dump cats at farms is this, you are relying on the property owner to treat your cat well. This is a stupid gamble. My landlord was not a cat fan. If I hadn't been living there, all three of these dumped cats would have died miserably.

Do the right thing. Find a no-kill shelter and leave the pet you're abandoning in safe hands.

originally posted by: Justso
a reply to: tigertatzen

Please make sure she is tested for feline leukemia before she is round your other cats. Very important.

All of our rescues are quarantined for six weeks while they're rehabbed, so no worries there. I vaccinate them myself. The bigger threat with kittens though, is the ringworm. Nasty contagious fungus and it can cross species, so hygiene and universal precautions are key. FIV has been ruled out already with momma, but thank you so much for suggesting...so many people out there don't know about things like that.