originally posted by: GENERAL EYES
All aboard the Freedom Train.

Only sadly, in todays world, it more like all aboard the Crazy Train.

Ozzy was a visionary

"The media sells it, and you live the role"

Call me a Nazi and I'll go all fascist on you.

originally posted by: stosh64
a reply to: loam

So I guess that is definitive proof, I'm a Neo Nazi from my youth.


And it stuck with me my whole life.


I blame my environment.

Damn I guess we're all neo Nazis now. Where do these nuts come up with this propaganda?


if that makes a neo nazi than what dose this make

Does this also apply to liberals, Antifa and BLM members?

What a paradox that would be.

posted on Sep, 4 2017 @ 05:25 PM
link
What a stupid measure. Most metal bandsand fans are vehemntly anti Nazi. Blood and Honour, Screwdriver and Nazi punk makes up less then a 10000th of the market and gigs are shut down by predominantly metal heads.


This will spread! Trust me. I have often compared this paranoia that "Nazi's are EVERYWHERE" to the witch hunts of the 17th and 18th centuries.

Is it not hilarious and scary at the same time we see those who are against Christianity becoming exactly what they hate, but hundreds of years later?


This is going to be a fun ride!

For all of our modernity, we are still just a slice of lemmings running from the latest perceived peril.

posted on Sep, 4 2017 @ 05:34 PM
link
Sadly, nothing new here. I'm a Christian myself, but sometimes I just don't know about the things some churches preach and I suspect there is a false religious belief in play here. At least it reminds me of that.

Once when I was involved in arranging a performance of the Broadway show "Beatlemania" shortly after it left Broadway and started touring, I got a crazy letter from a member of the Seventh Day Adventist Church that was so insane I still have it packed away somewhere. It was almost identical to this.


Hello brothers and sisters of Christ, I know that this is a topic much discussed already, but it cannot be said enough. Rock music is a scourge on our nation, and must be stopped at all costs. Here are 10 facts that explain exactly why God hates this rubbish "music".

1. It encourages the use of illegal drugs. Practially every one of the top 40 records being played on every radio station in the United States is a communication to the children to take a trip, to cop out, to groove. The psychedelic jackets on the record albums have their own hidden symbols and messages as well as the lyrics to all the top rock songs and they all sing the same refrain: It's fun to take a trip, put acid in your veins.

2. Drums are the instruments of satanists, devil worshipers and pagans, and should never be listened to. The rhythm has been proven to have a brainwashing effect on children, and slowly converts them to satanism. If you hear drums, block your ears! I cannot stress this enough.

3. Rock music encourages rebellion. The Lord orders us to submit to unto him, but with this rock and roll in our ears, we are likely to rebel against Him and His word. Further, the music teaches children not to listen to the wise counsel of their parents. How can we raise our children to be good Christian Americans when they listen to this rebellious filth?

4. Rock music encourages homosexuality and transvestism with men wearing make-up, and even dresses or skirts (which they try and say are "kilts", ha! We know better than to fall for that! Clearly rock represents a homosexual agenda, with all male groups touring the countryside in one bus. Most likely they are sharing the same bed as well, but let's not get into that.

5. Rock encourages women to start thinking for themselves, and to believe that they don't need a husband to guide and lead them. So-called female rockers parade on stage singing about nonsense like "independence". All such performers are lesbians or possibly bisexual, as some travel alone with large groups of men.

6. So-called "Christian" rock groups are the worst of all. Not only do they put the name of our almighty God into these "songs" with drums and guitars, which is the height of blasphemy might I add, but they're also part of the same agenda as the rest of them. They attempt to fool good Christian children and parents into buying their music in order to brainwash them and convert them to satanism.

7. Rock tries to tell us that the government is wrong, but only when a Republican is in office. Look how they've stopped doing that since Comrade Obama muscled his way into office. They've always wanted to destroy our beautiful capitalist country with their socialist ideals. Remember, it's a small step from rock music to communism.

8. Rock music encourages promiscuity and whoredom with their overly sexual lyrics and innuendo. They parade around on stage and in videos half-naked in an attempt to convince young girls (and boys) that they want to have sex with them. Studies have shown that children and teenagers who listen to rock are 22% more likely to have sex with older persons. Rock music = pedophilia.

9. Rock concerts are often used to present propaganda about "peace". This is a clear distraction from the war that God has ordained us to win. If the rock musicians were in charge, we'd all be living under the rule of the Saudis by now!

10. Lastly, rock music encourages us not to read God's Holy Bible. The lyrics of nearly all rock songs are laced with subliminal messages telling us to burn our Bibles and submit to the will of Satan! We must ensure our children read the Bible instead of listening to this filth.

Obviously the garbage about Obama and a couple of other things was not in it since it was in the 80's, but I think they get this from some church publication since this is very close to that letter. Just replace the word "Rock" with "The Beatles and you will get the gist of the letter I received.

It worries me that some of my fellow Christians who should know better buy into this nonsense and it's even more troubling that law enforcement would be that naive.

This is my favorite Lemmy cut..cheesy vid but love the guitar antics

originally posted by: bastion
What a stupid measure. Most metal bandsand fans are vehemntly anti Nazi. Blood and Honour, Screwdriver and Nazi punk makes up less then a 10000th of the market and gigs are shut down by predominantly metal heads.

Exactly. I've heard nazi-skin head music over the years and they are bands I've never heard of in my life. They have their own music... kind of like christian music but for skinheads! lol

Don't mess with metal heads... We will tare sh!t up and take over your government... Metalocalypse style!

When I was young I would go to a Wed. night Church youth group thing at my local church. When this album came out I though some of the pastor/teachers there were going to lose their minds. They spent a whole night one wed. talking about this album cover and warning us of the dangers of Heavy Metal Music.

They were convinced listening to Iron Maiden would absolutely get you possessed by the devil. The proof was this album cover and what it was saying. Which of course was that Iron Maiden had been fooled into believing they could control the devil, because he's on puppet strings. But if you look close, the Devil has a tiny human also on puppet strings. I'm surprised they didn't bring it in the room in a locked case dipped in holy water or something. LOL

At the time I remember thinking that is the coolest album cover I'd ever seen in my life!! LOL 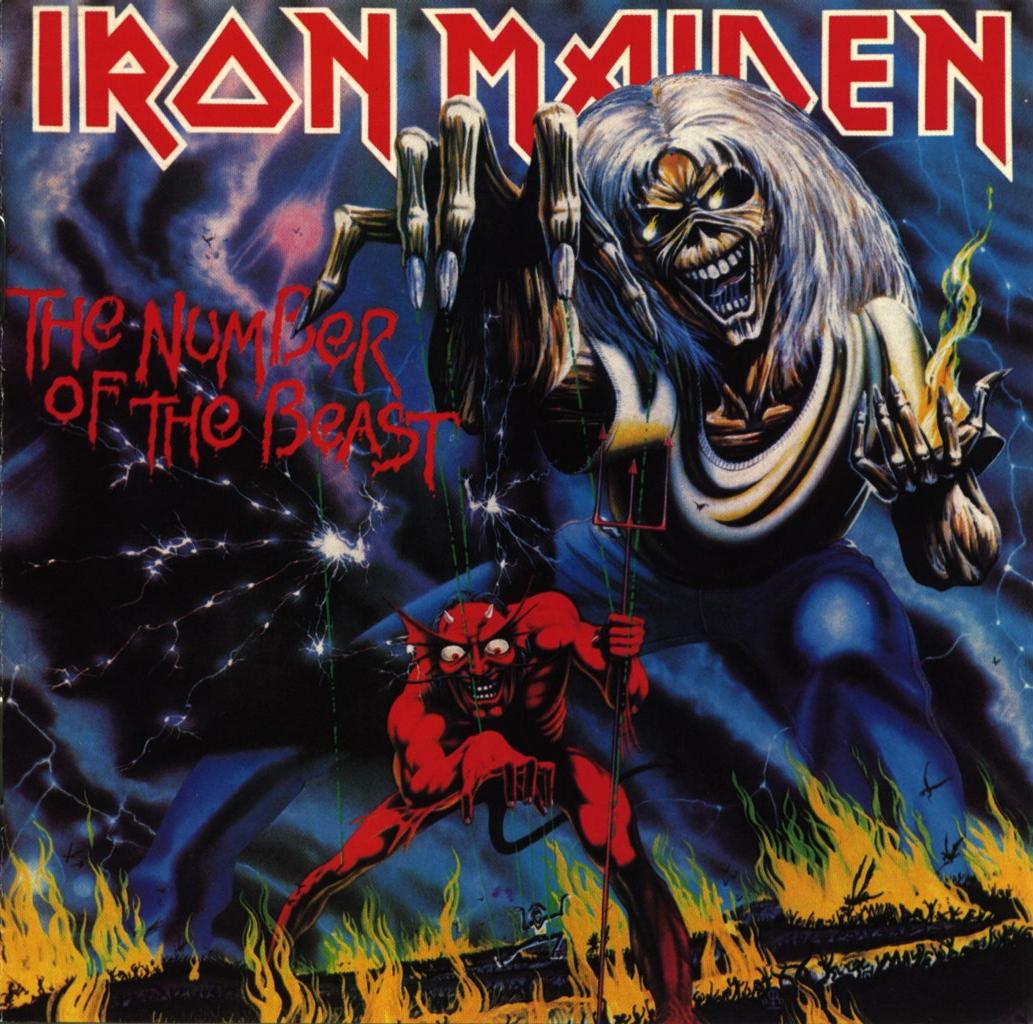 This is the new Red Scare or Satanic Panic, people are seeing nazis and white supremacists all over the place instead of communists and satanists, and now they're supposed to be paranoid about their own kids?

Report your friends, neighbors and children to the Ministry of Truth, together we can maintain the narrative that everyone who disagrees with you is probably an evil evil Nazi.

"Loud heavy rock music" (or whatever the counterculture music is at the time) has meant everything from being a commie, being gay, being a Satanist, and now, of course... being a Nazi.

It's like "reefer madness" for the music world, always has been.

Metal and Rock came about because of corrupted governments and society in the first place. They're just adding fuel to the fire.

...It's about time. I've been waiting for some good metal to come back on the scene.