For those of you who don’t know, Tuesday cannot come soon enough. Kim Dotcom has put the liberal MSM on notice...

Shortly after, in a desperate attempt to subjugate your thoughts and confuse people...

Nearly one year later, Rich's death remains one of America's thousands of unsolved murders — and the focus of endless conspiracy theories, spread this past week by Fox News, alt-right social media, a local D.C. news station and the Russian embassy in Britain.

The reemergence of the conspiracy theory this week, which did not lack for real news, revealed plenty about the fake news ecosystem (or to use BuzzFeed's useful phrase, “the upside-down media”) in the Trump era.

It also happened to cause untold pain for the Rich family, which has sent a cease-and-desist letter to the so-called private investigator who led this dive back into the fever swamp.


Untold pain for the Rich Family?

We'll find out on Tuesday!

How much credibility does KimDotcom have? I don't know much about them but IIRC he/they have had more than one "BREAKING" announcement that fizzled into obscurity.

It's amazing how the public's interest in having Seth's murderers caught is treated like it's nothing. Now that's what's painful.

Whether it was a botched robbery, a political hit, or something else...there is a murderer (or two) on the loose.

Not sure if George Webb has it all correct at this point in time but his work is adding important data for any interested in the subject ... Goodman adds some clarity on the "counter" counter story that was created
edit on 21-5-2017 by the2ofusr1 because: (no reason given)

I hope this guy doesn't have an "accident".... I want to see what he produces.

I do wonder if all of this, from all sides, is being orchestrated along a script though.

Why wait until Now to come out and testify about Seth???

This smells so incredibly fishy!!!

Serious question, and I don't feel like googling him right now.

Something isn't right.
A lot of something.

There is a real conspiracy here no matter how you slice it. Trust no one...

I just saw a article yesterday where the parents fired their fox news provided PI even filing a cease and desist letter.. because of him pushing conspiracy theories..

So I'm betting this is garbage from totally unacreredited "news" sites..


It would blow up the Russian deal conspiracy, for sure..

Assuming that he didn't give it to the Russians and isn't a Russian agent himself..

However I just saw an article yesterday where the parents fired a fox new provided PI for pushing conspiracy theories , even filing for a cease and desist letter..


So I'm betting this is the actual fake news..

posted on May, 21 2017 @ 11:10 AM
link
yeah i saw his tweet this morning and i went like WTH, he is up to something so lets wait and see, this is going to be interesting, unless the murderers has a hand in New Zealand, well thats going to be bloody if they do

Oh man it is good to see Kim coming out and stating this!

On notice is right, their narrative is imploding and the have the entire internet actively investigating this. They think they can edit Seth Rich's reddit threads!? I think not!


I'm betting if the family thinks this is BS..it prob is..

No one should be easier to convince of a conspiracy than the people searching for meaning in rich's death.

posted on May, 21 2017 @ 12:22 PM
link
The latest Trump/Russia hit piece from WaPo was published within 1 hour after the Seth Rich story broke on May 15th. It was a distraction for media outlets to focus their attention on instead of covering the Seth Rich story. Real shady stuff going on here. 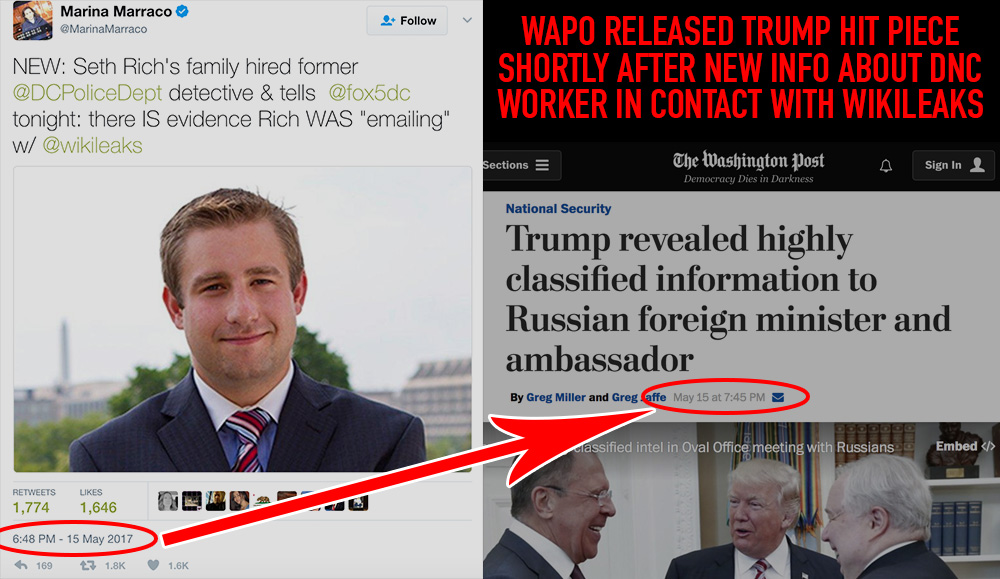 I just saw a article yesterday where the parents fired their fox news provided PI even filing a cease and desist letter.. because of him pushing conspiracy theories.


More propaganda, in my opinion...

WikiLeaks is offering a reward. Check...

Speculation: Wheeler was a plant to discredit the story. He makes a false announcement to the world, the MSM reports that he lied using a false statement causing anyone left investigating the issue to look like idiots. A similar method was used to coverup "Pizzagate" by using a crazed gunman to make conspiracy theorists look bad.

They start by saying, "We reached out once again to the Rich Family," establishing that they have a "direct link" and a relationship with the family. As it turns out, only a spokesperson gave a statement. As I've demonstrated in the OP, the MSM CIA is monitoring the scene, immediately publishing reactionary counter-narratives in an attempt to draw our conclusions. The other aspect is that they lied doing it. The video clearly thanks and encourages the internet's help.

This would lead me to speculate that because of the MSM's lack of integrity and their behavior in relation to potential "threats," they would without a doubt send this country into a tailspin in order to keep the truth from being released. Why would they do that? Don't the police offer rewards for any information that may lead to resolving an open murder case? Oh, that's right... We're in Washington's court.

D.C. police have repeatedly said that they think Rich was killed in a random robbery attempt...


Below is the supposed statement given by the Seth's parents to their "spokesperson," who then told FOX news. It sounds like pure propaganda to me after watching the video in the OP. They also had no idea what WikiLeaks was until the MSM notified them. They just want their son to receive justice and quite possibly may not believe or be interested in whether he was involved in such an "operation."

Give me a break, it reads like pure propaganda...

“As we’ve seen through the past year of unsubstantiated claims, we see no facts, we have seen no evidence, we have been approached with no emails and only learned about this when contacted by the press,” Rich’s family said in a statement. “We are a family who is committed to facts, not fake evidence that surfaces every few months to fill the void and distract law enforcement and the general public from finding Seth’s murderers.”

The Rich family’s spokesman, Brad Bauman, said that Wheeler had not been hired by the family but by a “third-party” he identified as Ed Butowsky, a Dallas financier who regularly appears on Fox’s business channels and on other networks. Bauman said that Wheeler offered his services to the family, “claiming he wanted to help.”


Can anyone dig up some information on these people?

They need to be properly vetted if they haven't been already. Who knows, maybe the whole thing is legit, but that's not why I signed up here. Wheeler used to work for the DC Police, which I've already proven to be corrupt.

The D.C. Police and Child Endangerment

Getting paid to play

posted on May, 21 2017 @ 03:55 PM
link
I'll add another log to the fires of speculation. Did Trump know prior to getting elected? Maybe Kim Dotcom withheld what he claims to know because it would incriminate him directly?

He might seek a plea bargain for providing the smoking gun evidence that will bring down the DNC and a few big name politicians. This will exonerate Russia, completely destroy the MSM and open the eyes of millions of people around the world. 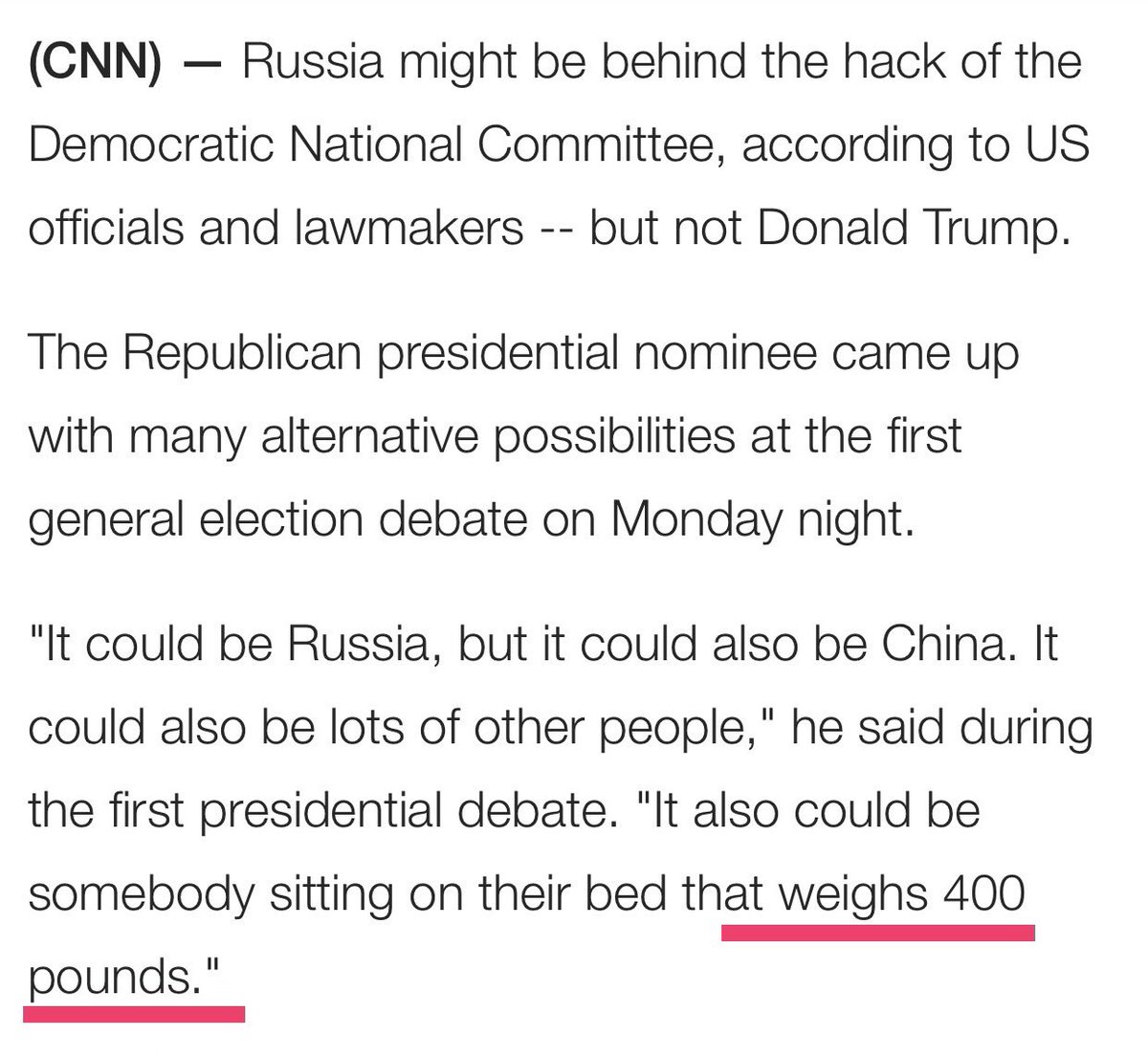