An explosion has reportedly taken place on the underground system in the Russian city of St Petersburg.

Horrific images from the scene show bloodied commuters lay on a platform.

Eyewitnesses say an explosion took place amid reports of bombings.

We'll be bringing you the very latest updates, pictures and video on this breaking news story.

For the latest news and breaking news visit Mirror.co.uk/news .

There is no other details to be added at this time as its just been reported in the last half hr.

(post by burgerbuddy removed for political trolling and baiting)
worldstarcountry 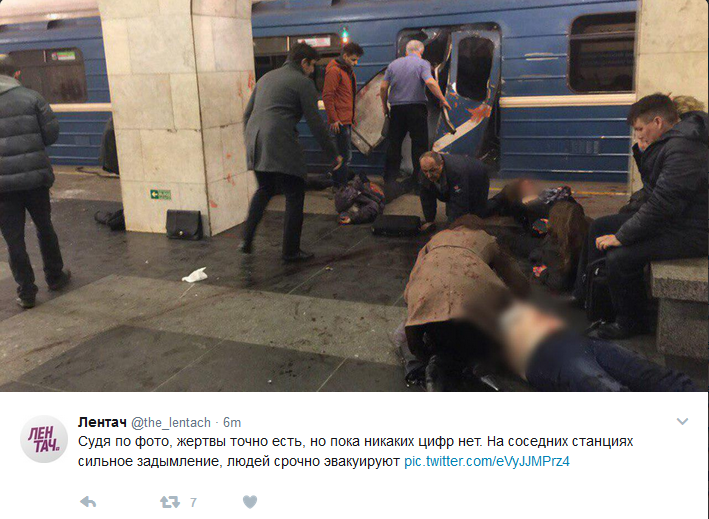 The metro management said they received reports of an explosion inside the car, possibly of an improvised explosive device.

RUPosters
According to TASS, ten people were killed, about fifty injured. "Interfax" reports that two explosive devices, stuffed with destructive elements, were triggered. Their power was about 200 and 300 grams in the TNT equivalent.

According to evidences from social networks, earlier on the same day at the metro station "Chernaya Rechka" they found a suspicious object and closed it for a while.

BestinShow
+26 more
posted on Apr, 3 2017 @ 07:20 AM
link
Well, we saw the lighter side of Putin with the April Fools Phone prank, but if this turns out to be a terrorist attack, we are gonna see Revenge Putin, and it ain't gonna be pretty. 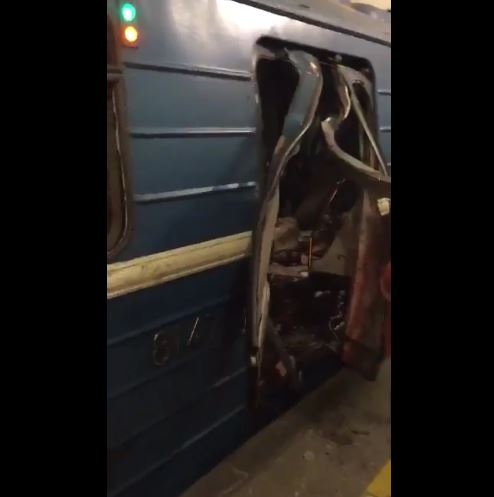 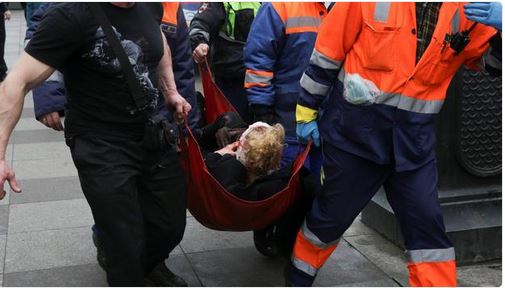 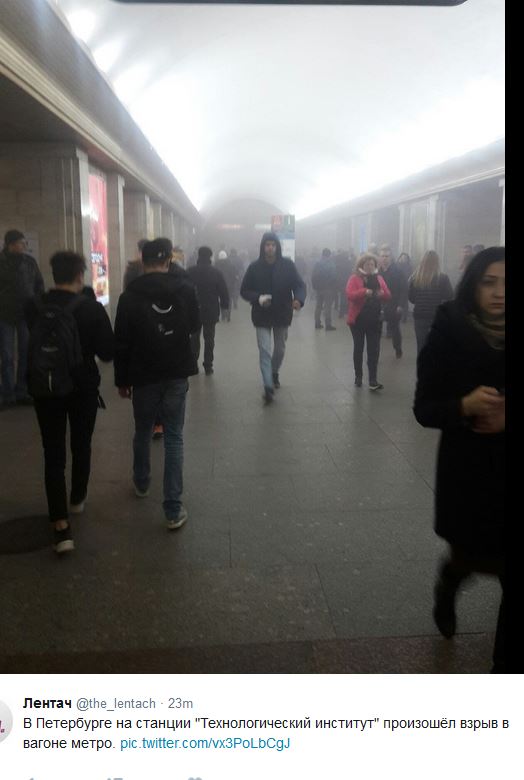 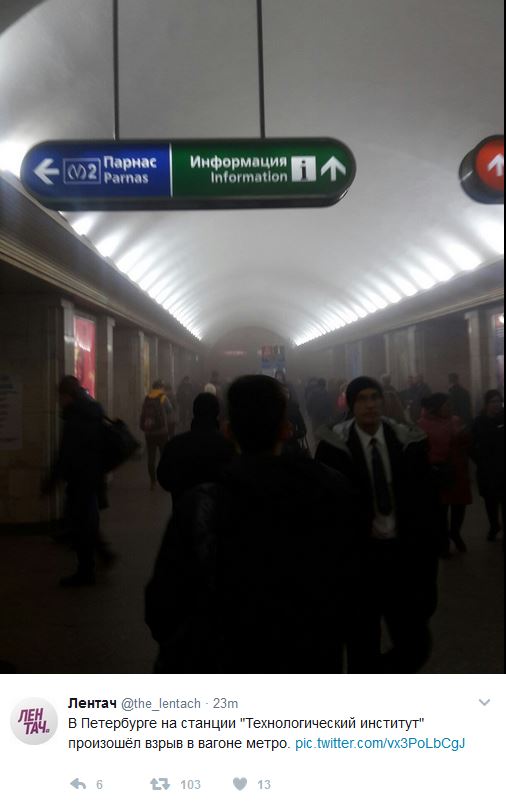 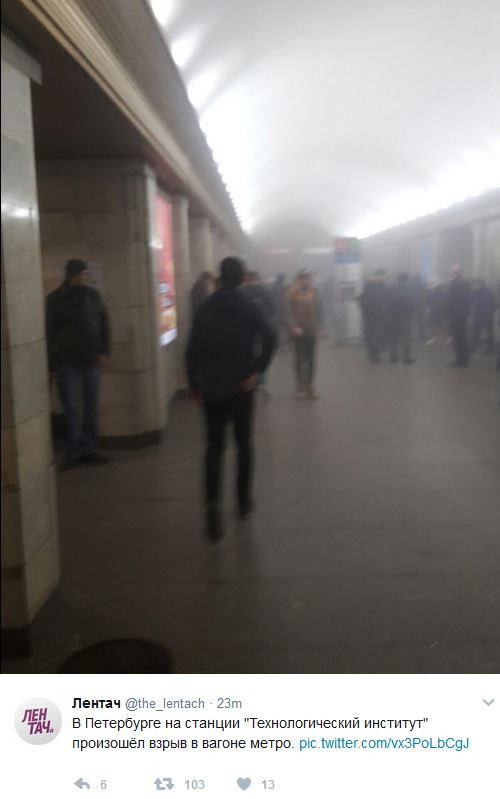 I suggest people grab screen shoots where they can as early reports have a tenancy to vanish very quickly.

The Telegraph is reporting at least 10 dead and two explosions , second explosion at another station on the blue branch of the St. Petersburg Metro.

Russia's anti-terrorism committee has confirmed that 10 people have died in the explosion in the Russian city of St Petersburg.
www.telegraph.co.uk...


Video from the scene.

posted on Apr, 3 2017 @ 07:30 AM
link
Reuters is running with a TASS story saying eight ambulances on scene and as many as ten dead as of right now. Three stations closed. RIA Novsti is saying blasts at two different stations.

Be ready for another Russia/Chechnya conflict in the coming weeks.
edit on 3 4 17 by projectvxn because: (no reason given)

Question is domestic, or Islamic? There were mass arrests and protests just recently, right?
It will (publicly) go against Putin critics, I guess. More to gain for the government.
I'm not saying false flag, because I hate it, real people died, I just think it will help putting more opposition members behind bars.
Sad day.

originally posted by: Shamrock6
AP is quoting subway press office as "a device" (singular) was set off on a train.

Given Russia's involvement in Syria I'd suspect it's a reprisal attack.

In Russia? I don't think a terror suspect there could fart without at least two officials taking notes...

In Russia? I don't think a terror suspect there could fart without at least two officials taking notes...

Obviously they can.
Russian police and intelligence agencies are only humans like the rest of us

Obviously, ones thoughts and prayers go out to the families of those who may have died, or may still die from their injuries, and to those left with lasting trauma of any kind as a result of this incident.

There are, however, things about the photographs which have been posted thus far, which may be of interest to anyone trying to pick detail out of this situation. One of the most interesting things about the images as provided thus far (which appear to be taken at the same platform, focusing on the same carriage and doorway thereto), is that only the door appears to have undergone catastrophic damage. Of course the victims do not appear to have fared particularly well, but in previous bombings involving a train carriage, it is very common indeed for the blast to have taken a massive bite out of the carriage, such that there is usually a gaping hole in one or both sides of it.

This must have been a relatively small device, either that or the train carriage is built like a bloody tank, because for only the doors to have undergone significant structural reorganisation in the blast is very unusual in an event like this. The Madrid bombings, the 7/7 bombings on the London Underground and other events like it, all feature explosions which utterly warped the shape of, or simply blew a large hole in the carriage. Far more than doors and windows were blown out, instead entire wall panels just blown clear away, the blast radius actually destroying everything in its immediate vicinity, turning whatever avoided utter vapourisation into flying shrapnel, traveling through the carriage, sometimes into neighboring carriages, there to cause bloody havoc, not to mention to anyone stood on the platform (assuming detonation at a platform, rather than during movement).

Any ballistics and explosives experts wishing to add their input on the matter of the extremely localised nature of this explosion, would no doubt be welcome!