I think we are on the edge of a war alright.

posted on Jan, 2 2017 @ 10:07 AM
link
Russia will not collapse like the USSR. Which means war, I.e. Russia with it's Iranian, Hezbollah (and currently Turkey) pact, in addition to the China strategic alliance..... God only knows where Pakistan and India fall. Against NATO and the US.

We'd all be dead.

I agree,
I reckon the palestinian terror groups will start more trouble once they realize Trump isnt interested in their BS!

I don't expect NATO to aid the US.
If THOSE are against us they'll sit it out.
TECH is our ONLY salvation.
edit on 2-1-2017 by cavtrooper7 because: (no reason given)

next up are country wide witch hunts for russians

and duck and cover drills..

I did not apologize for Russia. I asked you to admit that children in Mosul are also dying by American, British, and French made weapons. The same in Yemen. Those children are dying everyday, and all the bombs dropped by Saudi Arabia also come from mainly Britain and USA. You got third party killings of children in Yemen, and direct kills from airstrikes and artillery in and around Mosul by American and British weapons.What are your opinions of these? Do They count??? You should also consider that many reports that came from the alleged "civil defense" of the white helmets was completely fabricated.

originally posted by: worldstarcountry
Syrian White Helmets Make Another Fabricted Video of a Fake Rescue of Allegedly Injured
originally posted by: worldstarcountry
These are the same people who are providing"credible reports" to the state department about targeted attacks on civilians, in which pretty much every Hospital has been destroyed at least twice now, and a handful of puppy shops. 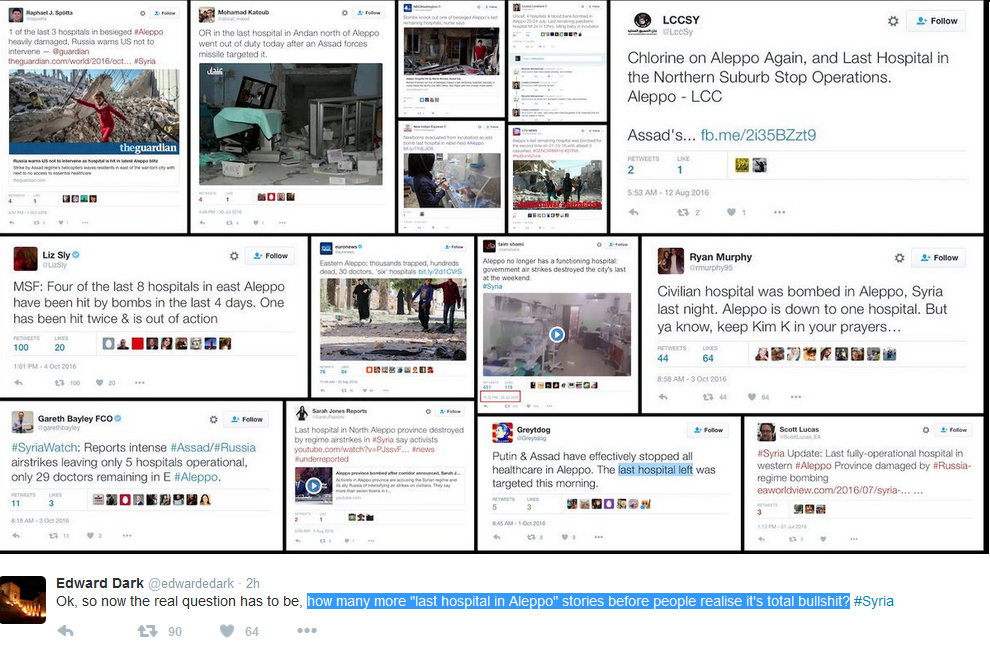 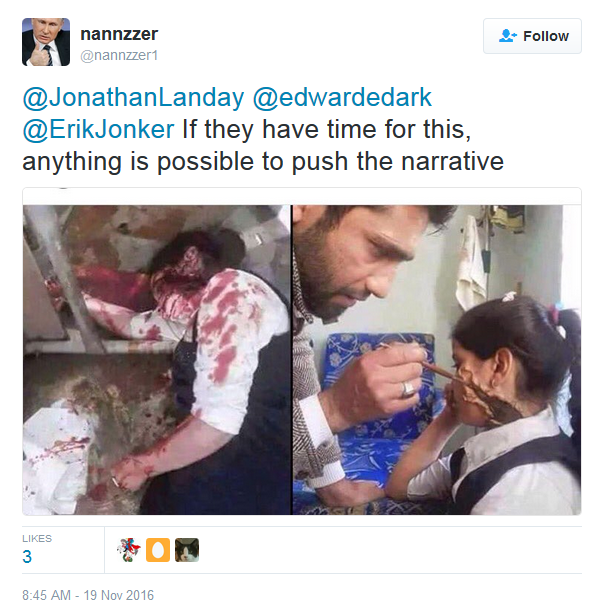 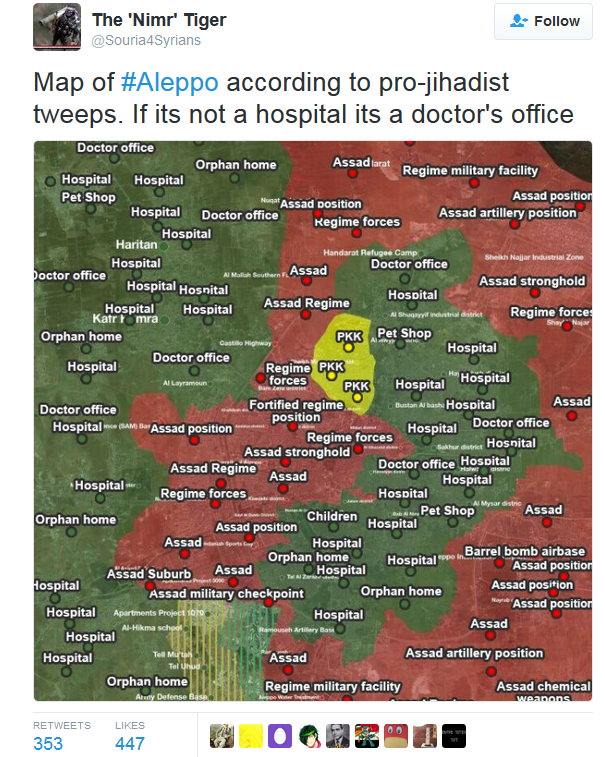 Even this Russian report could be an exaggeration, due to lack of corroboration.

We frequently even heard John Kirby frequently refer to this organization and SOHR between October and November. They stopped using their names around December when too many of their orchestrated missions were exposed, but continued to cite "credible sources, which we do not have reason to doubt" .

I even pose the question that the Russian Defense Ministry report of 17 killed could have been an exaggeration. Unfortunately, the recent findings of mass graves in Aleppo may confirm what many had feared about the barbaric methods of the occupying terrorist army.

posted on Jan, 2 2017 @ 01:49 PM
link
I really hate SOHR. It's literally one guy in London, not even from Syria whose job it is to distribute pro-terrorist propaganda the accuracy of which is on par with stuff the Germans published in March 1945.

He should be arrested for his crimes.

I really think this was a good discussion. Many divergent views and some very good rhetoric. I am deeply impressed.

I do NOT want this war. But maybe the only thing to do is just pray it doesn't happen and to hit Puttin so hard short of war to make sure he stops his aggressions and not just with us.

Russia hasn't committed any aggression against the United States.

If you are "responding" to things have not occurred then you are the one committing the aggression. Enough baseless acts of hostility. Time for reconciliation and peace between Russia and the West.

I said not just against us - but they did hack our election.

If you really believe Russia is not an aggressive power - explain them seizing Georgia and the whole of the Crimea, attacking civilians in Syria just to keep their "friendship" with the dictator Assad--not to mention their forces lined up on the rest of Ukrainian border.
And these are just the ones we know about. How many more actions were done covertly ?

If we face them down now maybe we can avoid an outright shooting war. I just think the odds are not good for avoiding it.
edit on 2-1-2017 by JoeP2247 because: spelling error

And what about the countrys the US has invaded snd the civilians it has bombed and the evil reguimes it has propped up?

originally posted by: schuyler
No. In fact, we are on the brink of a massive reconciliation with Russia (and Israel) in an attempt to repair the foreign policy fiascoes of the Obama years. War with a major power helps no one. Plus, there is no economic reason to do so. Nobody is going to get rich building a bunch of tanks or liberty ships. The Big Claim here is that Russia 'hacked' the election. The left is big on this because they can't see taking responsibility for their loss. like a spoiled kid, it must be someone else's fault. But the only thing Russia MIGHT have done (and there is considerable doubt) is expose the DNC emails, which was a favor for us. They weren't changed; they were exposed. No one has said they aren't real. Yes, I know the CIA/FBI say they did, but it's funny: In any other circumstance people would say they are buffoons who get nothing right. They're unreliable, etc. But suddenly THIS time they "must be right." What's up with that? Is it that they are incompetent when it comes to Hillary emails as SecState, but suddenly whizzes when it comes to Russia hacking?


So why are there 6,000 Abrams tanks stockpiled? that's a hell of a lot of profit.

Yea I just not sure what aggression against us you speak of. I only see them attacking terrorists. Are you saying the terrorists are us?

Georgian intervention was in response to their invasion of South Ossetia. An invasion that wouldn't have happened without the likes of John McCain egging on monsters like Saakashvili

Crimea is Russian. Demographics show that. Public opinion there showed that. History until 1958 showed that. They merely ended almost 60 years of illegal occupation. Which wouldn't have been necessary at all if not for the 2014 Coup against the elected government.

They don't attack civilians intentionally in Syria. Collateral damage is sure to occur when terrorists use them as human shields.

Assad may be a dictator but he enjoys widespread popular support despite the war. It's not your place to demand his removal. Russia was invited by their Syrian friends to aid with the pest control.

Seems like nothing needs to be done. In fact all those examples seem to be reactions to American actions. Hmm.. I wonder who the aggressor is.

I really believe our intelligence capably is excellent and I for one do not doubt their take on this one bit.

Don't bring up Iraq - it was not our intelligence people that came up with that - it was paranoia on the part of Bush and mostly Cheney.

As to the tank build up I don''t really understand why they put so much money in them. I think you are very wrong about the Abrams not being effective - my kid was around them for several years in combat and I asked him about them and he thinks they're great. I am sure the DOD has some reason for them - I just have no idea why the money couldn't be more effectively used.

What a load of crap- you apologize for Russia and make excuses for them.

They want NATO destroyed and to knock us down. Putin wants the USSR restored to glory. He has said as much.

I think they must think we are too divided to react. So far he has been right.
edit on 2-1-2017 by JoeP2247 because: missing sentence

naw the Abrams is lacking compared to Russian armor insofar as to regards on their ATGM defense capabilities.


originally posted by: worldstarcountry
a reply to: Snippythehorse
The T-90's seem to do better against ATGM though. Abrams have been getting ripped across Iraq with TOW missilies given to them in Syria to use against Russia and Syria! A DAMN SHAME!


Doesn't do too well against Russian ATGM either it appears...


Here is a T-90 taking a hit head on, but its not in nearly as bad shape. This is the only video I can find of a T-90 getting hit. But there are plenty of T-72 and other older tanks in Syria getting blown to bits by ATGM.

and another members contribution on the T-90's defenses.

Facts are facts I'm afraid. Sorry if they don't align with the mainstream warmongering propaganda.
edit on -060003pm1kpm by Ohanka because: (no reason given)

And you don't believe our intelligence about the hacking I think.

But you believe that liar.

He also said that the downfall of the USSR was the greatest catastrophe of the 20th century - greater than WWII??

You can believe what you want - doesn't change the facts about them.

You may be basically right.

Sorry but I am out of here - Penn State v USC is on and should be a really good game. I thought that started 5PM EST. Damn.