posted on Nov, 25 2016 @ 09:32 PM
link
Christmas was around long before Christianity (Don't believe me? Go read some history you ignoramus) . Christians stole Christmas, but that doesn't mean they own it just like if you go to a bank and steal money, that doesn't mean you now own that money. It's stolen, it still belongs to the original owner, you just have it now because you took it without asking.

These days Christmas is about buying gifts, getting drunk and stoned with your friends and family, things like that. Christianity has absolutely nothing to do with it other than the fact that they stole it and think they now own it. Nobody I know is any religion yet everyone I know celebrates Christmas. It's all about Santa and good times, happiness and all that.

When people say that saying Merry Christmas is offensive they seem like ignorant retards. It has nothing to do with Christianity. Saying Happy Holidays is offensive though. Holiday is another word for "Holy Day" - which is religious.

Don't say Happy Holidays - it's offensive. People seem to have this concept completely backwards for some reason.. I don't get it.
Seasons greetings is okay though if you want to use something other than Merry Christmas.

Anyone that is offended by either is a moron.

What do you think "Christ Mas" is named after???

That is actually specific to a certain religion where as Holy Day is just a general Holy Day for anyone.

Christmas was around long before Christianity

Christmas was around long before Christianity


Ok they might have invented the name but everything else about it was around long before. History says so.

posted on Nov, 25 2016 @ 09:58 PM
link
Trigger Alert!!!! I hope you wrote this being sarcastic. Or are you "one of those people".
Wouldn't it be a nice thing to just say thank you after a Merrry Christmas. If someone told me Happy Hanukkah, I would smile and say thank you. There is no malicious intent, it's someone giving a very kind greeting and wishing you happiness. Don't be "that" person.

posted on Nov, 25 2016 @ 10:58 PM
link
I'm sure that you could find an online store that would custom make you shirts saying "Say merry Christmas or F-off" or whatever suits your mood that day. Feliz Navidad.

It would have been helpful if you'd instructed the ignoramuses to look up 'Saturnalia' for their edification - a Roman festivity involving gift giving and feasting in December.

Consider this post - made with goodwill - to be my offering in the (premature) spirit of the season.

originally posted by: SPHARAOH
I'm sure that you could find an online store that would custom make you shirts saying "Say merry Christmas or F-off" or whatever suits your mood that day. Feliz Navidad.

i prefer F-off but, that's just me.

posted on Nov, 26 2016 @ 12:18 AM
link
Happy holidays shouldn't be offensive as the birth of Christ is or should be a holy day(s). Why would anybody take offense?

Nope not offended in any way OP, must just be you. 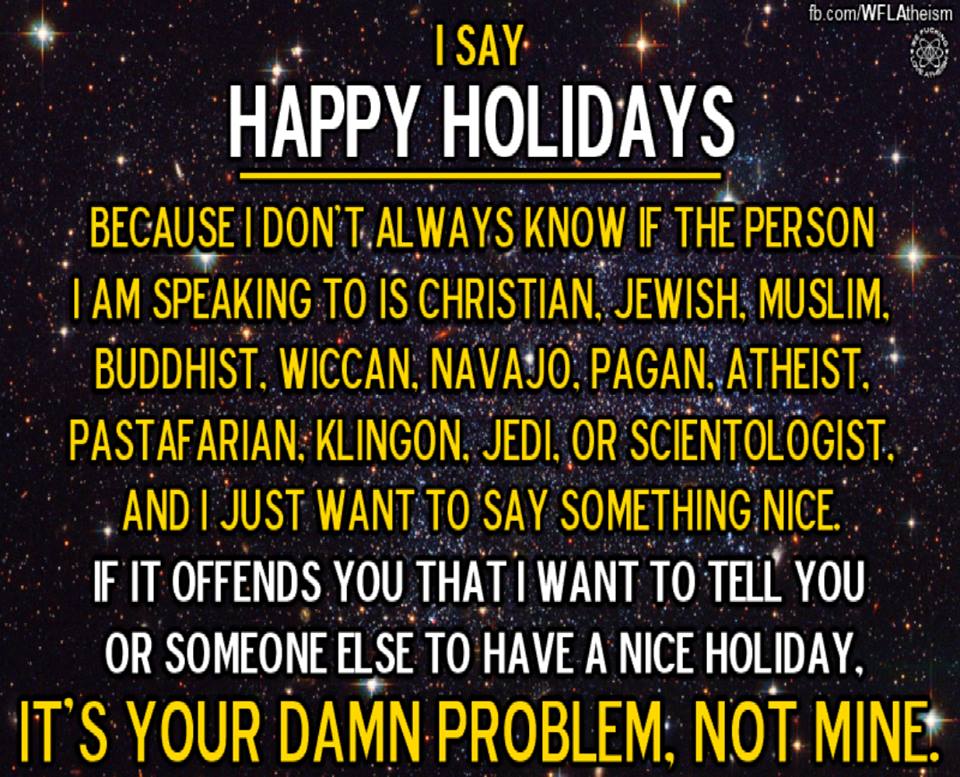