At approximately 16:15 CST on Tuesday, November 7, 2006, federal authorities at Chicago O'Hare International Airport received a report that a group of twelve airport employees were witnessing a metallic, saucer-shaped craft hovering over Gate C-17. The object was first spotted by a ramp employee who was pushing back United Airlines Flight 446, which was departing Chicago for Charlotte, North Carolina. The employee apprised Flight 446's crew of the object above their aircraft. It is believed that both the pilot and co-pilot also witnessed the object. Several independent witnesses outside of the airport also saw the object. One described a "blatant" disc-shaped craft hovering over the airport which was "obviously not clouds." According to this witness, nearby observers gasped as the object shot through the clouds at high velocity, leaving a clear blue hole in the cloud layer. The hole reportedly seemed to close itself shortly afterward. According to the Chicago Tribune's Jon Hilkevitch, "The disc was visible for approximately five minutes and was seen by close to a dozen United Airlines employees, ranging from pilots to supervisors, who heard chatter on the radio and raced out to view it." So far, no photographic evidence of the UFO has surfaced, although it was reported to Hilkevitch that one of the United Airlines pilots was in possession of a digital camera at the time of the sighting and may have photographed the event. NARCAP has published a 155-page report, suggesting a presence of the object in account over O'Hare and has called for a government inquiry and improved energy-sensing technologies: “Anytime an airborne object can hover for several minutes over a busy airport but not be registered on radar or seen visually from the control tower, (it) constitutes a potential threat to flight safety.”

I personally believe this is one of the more important sightings there have been. An immediate cover up began from the beginning, which was obvious. I don't think enough time has gone by for American Airlines workers to come forward, as most are still employed and are still worried about losing their jobs. Would love to get a discussion going again in regards to the event. Certainly a lot more here!

posted on Nov, 9 2016 @ 10:02 AM
link
An object punching a hole in the clouds, that's sound a little to cartoonist, other than that it's an interesting case.

posted on Nov, 9 2016 @ 10:05 AM
link
Thank god, something other than whiners and boasters after last night's cultural / political sham.

So, UFOs. What do I have to add to this?

I agree, very very interesting. Even moreso the relative silence since. It would definitely seem that the airlines managed to sway their employees to silence.

Not unlike a very close friend of mine who worked on Minuteman missile systems up in Grand Forks.

Perhaps the airlines and the military offer the same courses in how to quiet their subordinates?

They were hushed up from the start. Several pilots took photos of the object, whatever it was. The FAA and Military brass were on site pretty quickly from reports. I asked my friend who worked the ticket counter that day. She remembers the day, although she wasn't in a vantage point to see anything. She said when she tried speaking to other employees about it (Seems most were joking about it), they were all told not to discuss the event with anyone, even other employees or face termination. Something happened that day, what exactly has not yet been determined.
edit on 9-11-2016 by EngineerGuY because: (no reason given)

My friend who shall forever be named "glow-worm" will likely never utter a word, not even on his deathbed.

posted on Nov, 9 2016 @ 11:43 AM
link
I did see ONE blurry, indistinct photo on the linked original thread. And to echo others, why aren't there more photos? You'd think anyone there with a camera or camera phone would have been snapping like crazy

posted on Nov, 9 2016 @ 02:32 PM
link
thank you for this thread honoring maybe one of the more higher profile U.S. sightings in years. Its quite clear to me based on different news stories about this sighting the FAA went into extreme hushup mode after there was sightings by quite a few airline employees. To this day to get any info about sightings from the FAA one must put in a request for freedom of information. Thats rather telling in my opinion.

posted on Nov, 9 2016 @ 03:11 PM
link
Yep one of the best cases of the 21st century for sure. I remember following the case on here as it was developing long before I was a member. And I also did a thread a year or so ago. Problem is that there are some faked UFO pictures out there from O'Hare to muddy the waters.

As far as I know this is the only genuine picture of the UFO over the airport. 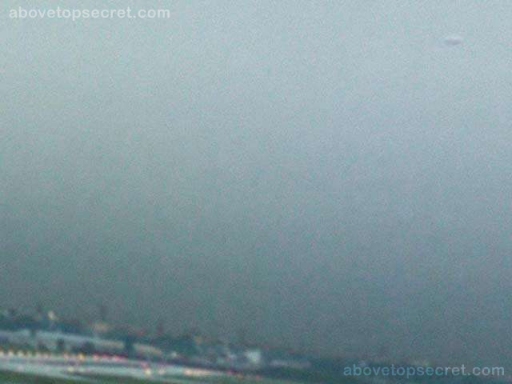 There a couple of other photos of a UFO before the O'Hare incident. There are hardly any witnesses who went on the record, even anonymously, and the 'hole punched in the clouds story' was mentioned by only three or four people at most.

I came to the conclusion that we can't get to the bottom of this because of previous 'UAP' issues at O'Hare, the fragile financial state of various operators in the air industry around the time, company politics and probably national security.
It might have been black ops or even 'alien' tech, a total misunderstanding about what was seen or even a weird weather phenomenon caused by this technology. The "official" conclusion was rather frustratingly dull.

So yep I think this was a cover up of something. Can't believe it was all 10 years ago now.

edit on 9/11/16 by mirageman because: correction

that's an interesting pic you got there MM. I can't say I have seen this. The only other pic I have seen is from the tv show that was on some years ago called UFO Hunters.

Correct, this picture seems to be an actual picture from that day. That is to say, it has been analyzed and pretty much everyone has deemed it a genuine picture. Again, hard to say, but I would lean more towards it being authentic. Time will tell, hopefully more employees and pilots come forward from that day in the near future. Something happened that day above O'hare! 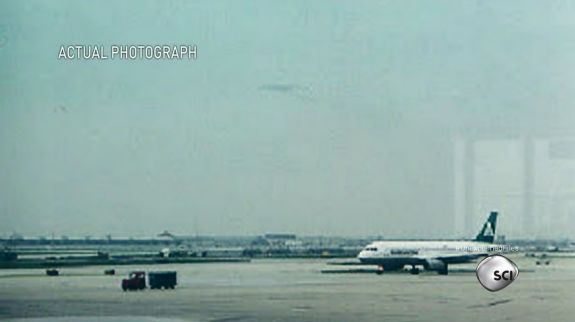 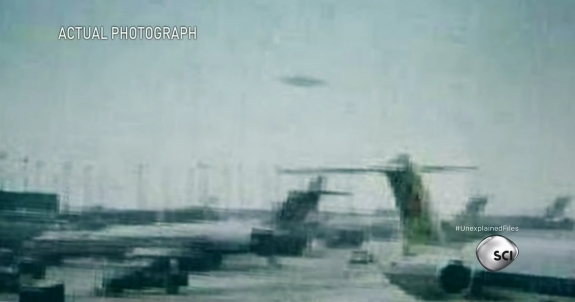 
There was also a similar object snapped above the La Salle Nuclear Plant in Ohio on the same day. 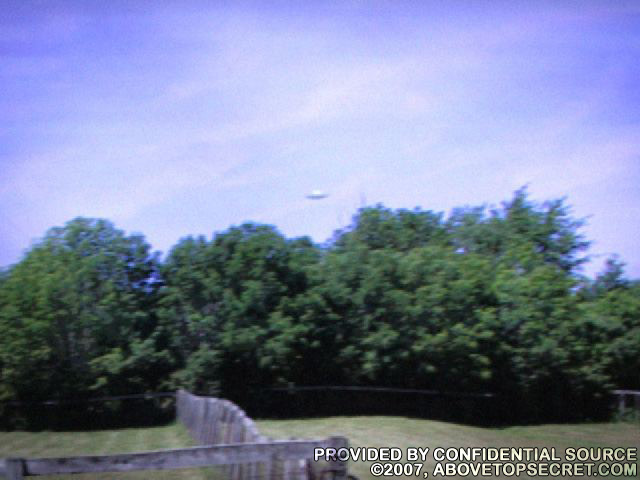 Which as far as I know has not been proven as a fake. See : www.abovetopsecret.com...

Thanks for the share, I remember as a kid hearing about the UFO on the news and several UFO documentaries shortly after. I've heard this case was covered up pretty well, no one wants to come forward it seems....Which is sad, considering i've noticed instances of UFOs over airports have been declining steadily over the years... Maybe thats just part of the coverup and censorship?

Back than, I was a one of the so called, "LURKERS" of ATS. At the time I was rocking out in the HistoryChannel.com/UFO forums when Ancient aliens was still pretty big.

This incident sure had the boards buzzing, I can't believe time has flown by...

Funny thing, supposedly Thomas Townsend Browns daughter frequented that same forum, "Linda", she was a sweet old lady.
edit on 13-11-2016 by Arnie123 because: (no reason given)

originally posted by: vlawde
I did see ONE blurry, indistinct photo on the linked original thread. And to echo others, why aren't there more photos? You'd think anyone there with a camera or camera phone would have been snapping like crazy

I think Dan Akroid scooped them all up and is sitting on them. Can't remember where I got that from.

Maybe it was at the end of his UFO documentary...

Or it could be material from his show that got cancelled right before airing, it was called "out there" if i recall correctly?

I'm not certain these are real. In fact I doubt they are. I do remember the image posted by MM from that day being authentic. I also remember a photo of the hole in the clouds that the UFO allegedly created when elevating upwards with great velocity.

The reasons I believe yours are fake are because the sky in the photos don't represent the dark gloomy day it was in Chicago that day. Which is reflected in the authenticated photo posted by MM.

You'll have to clarify what you mean when you say


I do remember the image posted by MM from that day being authentic.....

The top two photos in my post are not my photos (unless MM stands for someone else????). They are stills taken from the Unexplained Files a TV show and Jeff Ritzman has shown them to be fake.


The third and bottom photo was posted by SkepticOverlord here: www.abovetopsecret.com.... He vouched at the time for it's authenticity.

posted on Nov, 22 2016 @ 03:17 PM
link
this is just Uncle Sam field testing an old, yet unknown-to-the-public, technology. it's a living laboratory ... if they can quantify exactly how long it takes to be discovered while hovering over a major airport, they will have a pretty good sense of how well they can run surveillance over any airport or similar facility anywhere in the world. they have the radar records from the airport. they have media reports and airport records, which show exactly when the platform was discovered by employees. It's the same MO we've seen over and over again, from the Hudson Valley to the Phoenix Lights, the rural Illinois flap to the Belgium wave ...