Was Hillary using hand signals to Lester Holt during Debate and possible seizure?

After reviewing the tape, a video is going viral which shows Hillary scratching her face repeatedly. Each time she does this, Lester Holt begins the process of interrupting or “fact checking” by using liberal talking points.

Trump mentions “stop and frisk,” Hillary scratched her face. 30 seconds later, Holt pushes back about the supposed unconstitutionality of the policy.

More “signals” happened during the discussion of NATO, and Hillary appears to “signal” again about his opposition to the Iraq War… And she repeatedly signals as Holt waits to interrupt. Holt finally attacks Trump, and Hillary jumps back into her scripted response to the NATO debate. Read more: www.thepoliticalinsider.com...

During the debate when Clinton wanted to signal Holt when she wanted the floor, she rubbed her face in a manner similar to a baseball manager.

According to True Pundit she has not done this in any other debates during her career supporting the accusation that these were signals.

So ATS, Do you think she was cheating? Seizure? Thoughts.

If she was cheating we should point this out to hopefully end it from happening at the next debate.
edit on 29-9-2016 by gmoneystunt because: (no reason given)

posted on Sep, 29 2016 @ 08:04 AM
link
Itchy face maybe. Side effect of being too heavily "medicated" by that device in her back pumping out alien goo into her veins or something...

nobunaga
+3 more
posted on Sep, 29 2016 @ 08:15 AM
link
at 5:30 she has a mini seizure... trump looks at someone in the crowd and mouths the word seizure. definetly. also, trump refused to shake lesters hand because he was illegally wearing an ear piece.
47 direct interuptions of trump, only 7 of hillary.

Maybe she just has a tell?

"Oh noes, she scratched her nose - must've been a signal!"

"OMG, she looked at Donald - must have been code!"

My favorite "incredible" youtube video from the debate is the Trump sniff. What the heck was going on there???? (watch the whole video before passing judgement)

Must have been some kind of signal.

Lester's earpiece is not "illegal". 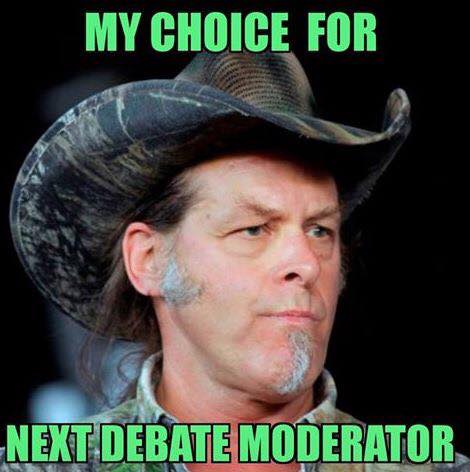 His sniffing was definitely a signal --- that, or some kind of seizure.

It couldn't be that Donald talked so damn much, exceeded his time so much, and went off topic so much that Holt HAD to interrupt him to give Hillary her turn and keep the debate moving along...

Trump was nice enough to say something ignorant about the same time to get the cameras and attention on him. (He's a reptilian as well, but has better luck with his mask due to the orange pigment added. (the orange pigment makes the mask more pliable and sticky. it's commonly known in reptilian circles)

Sniffing...
Being dragged into a van by bodyguards...
yeah, same thing...lol...

As for the hand movements, I have to admit it does look a bit 'sus', and the choice of approaching a poker pro for a comment on his observations was a good decision by the Gateway Pundit site. That gives it a grounding in reality that it would otherwise lack.

The only question is whether Trump's bluster provoked a little stress reaction in both Hillary and the moderator at the same time, meaning that a reflex fidget in Clinton occurred at the same time as the moderator prepared to ask a follow-up question. I don't think this is very likely, but it is certainly possible.

We'll see if she does it (or anything similar) in the next debate.

originally posted by: Benevolent Heretic
a reply to: kaylaluv

It couldn't be that Donald talked so damn much, exceeded his time so much, and went off topic so much that Holt HAD to interrupt him to give Hillary her turn and keep the debate moving along...

I know...I can't even count how many times he mentioned who all was endorsing him out of context...such a bad debate. Hillary actually did ok, but neither was great by any stretch.

Well, she made through the debate just fine, although I heard Trump virtually disappeared soon after the debate. Could he have been dragged into a van by bodyguards??? Hmmmm....

I dislike both these people but come on, hand signals, seizures?

Cocaine use for Trump?

My god. Most it seems, have had the demagoguery and extreme partisanship be passed down from leader to follower.

They couldn't simply break to her at any time she wanted . Two minutes to answer each question.
But his epic shame in not preparing is showing now.
And his supporters shame results in stupidness like this video.