Okay, I'm working an my biggest piece ever. A few of the recent #DNCLeak emails happen to be of of possible interest. In scanning such I decided to finally look up what this one was talking about: 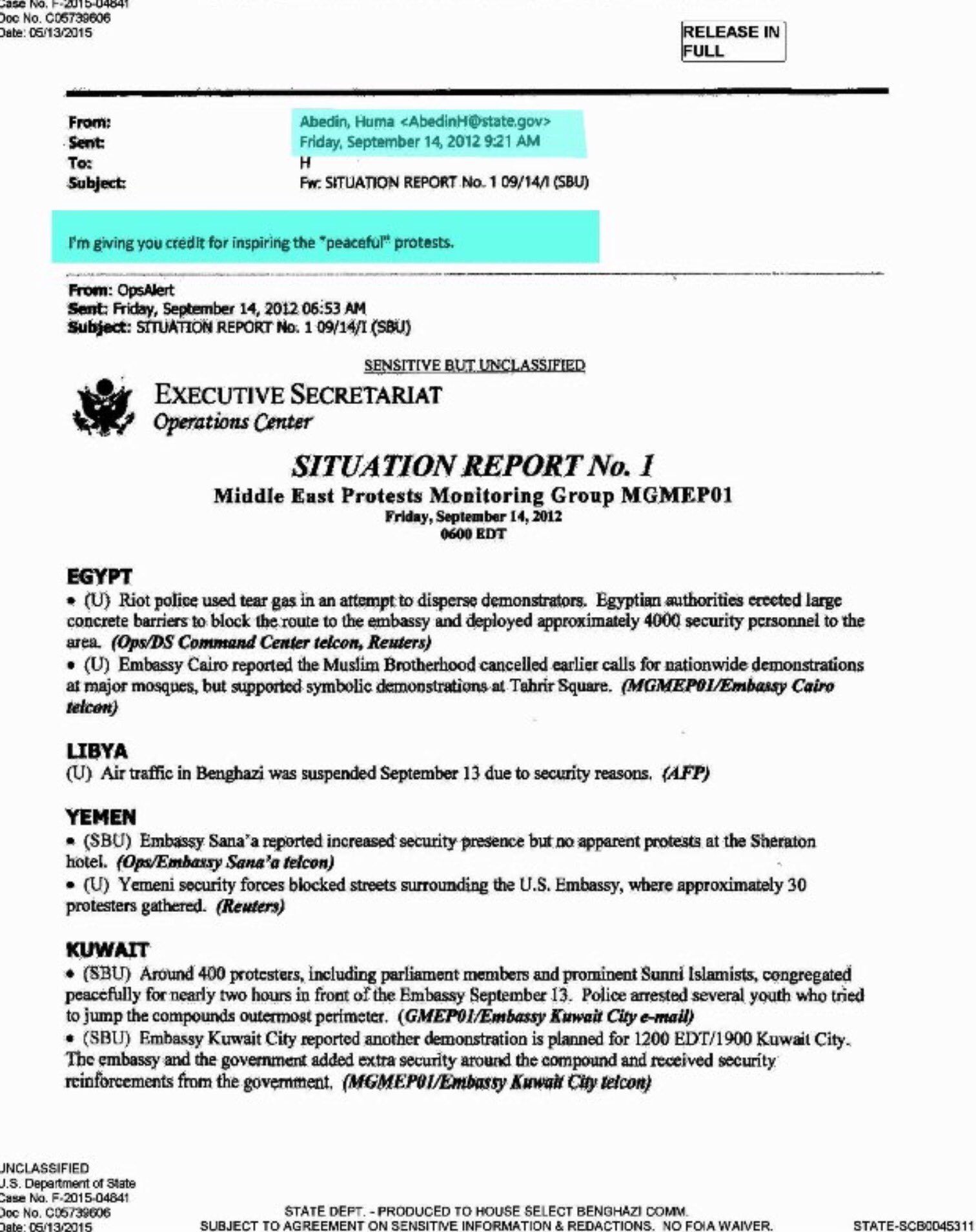 What was Huma talking about?

﻿ What’s Behind the US Embassy Protests in Egypt
The infamous anti-Islam film may have sparked the demonstrations, but wrangling between Egypt’s many political factions were what really drove them.
﻿ The main street leading to the United States embassy in downtown Cairo has been sealed by a twelve-foot-high wall of concrete blocks. The acrid scent of tear gas lingers in the air as hundreds of black-clad riot police roam the area in and around nearby Tahrir Square.

It was here that the first protests began on September 11 in response to an anti-Islam video that touched off demonstrations in some twenty countries across the Middle East and beyond. The protests in Egypt came to an end four days after they began with a decisive police crackdown. When the dust settled, at least one person was dead, more than 220 injured and over 430 arrested.

The distasteful and amateurish fourteen-minute video clip that ignited the unrest was first posted on YouTube in July, but it received scant attention until earlier this month, when Maurice Sadek, a Coptic Christian living in Washington DC, whose incendiary anti-Muslim campaigning led to the revocation of his Egyptian citizenship earlier this year, linked to a translated version of the film on an Arabic-language blog and highlighted it in an e-mail newsletter.

What caused the RIOTING?
As a film critic'ie type, the quality of this film makes me want to hang myself (pun intended!), but hey whatever floats your rioting!

Who else was involved??

Spontaneous anger over an obscure anti-Islam video titled “Innocence of Muslims” has been widely cited as the cause of the embassy protest in Cairo. But clear evidence shows that these al Qaeda-linked jihadists used clips from that film that were televised on Egyptian television as a pretext to incite a mob.

The most conspicuous of these jihadists is Rifai Ahmed Taha Musa, an IG leader who was named as a signatory on al Qaeda’s infamous February 1998 fatwa announcing an Islamic Front for Jihad against Jews and Crusaders. The fatwa justified terrorist attacks against American civilians and others. Musa would later disavow his participation in the Islamic Front, but his al Qaeda ties are well established.

Who ran the protest, really?

On the afternoon of September 11, a far-right political party and its affiliated football club – spurred on by Salafist Leader Wesam Abdel-Wareth – stormed the Cairo embassy walls, ripped down the U.S. flag, and replaced it with an Islamic banner.

Many watched these developments with increasing trepidation – especially given the day of the attack – and worried about the effects it would have both in the United States and across the Arab world.

The source of the mob’s anger was Innocence of Muslims, a poorly-shot film featuring American actors in brown-face, and depicting the Prophet Muhammad as a "womanizer, pedophile and fraud." The few available clips are so patently absurd that the video could quickly be dismissed as laughable were it not for the realization that this crisis would almost certainly result in the loss of lives. www.aaiusa.org...

Ayman al-Zawahiri gave the orders. Others carried them out:
In Egypt, the protest was organized by Wesam Abdel-Wareth, a Salafist leader and president of Egypt’s Hekma television channel, who called for a gathering on September 11 at 5 p.m. in front of the United States Embassy, to protest against a film that he thought was named “Muhammad’s Trial” [actually, a scrappy crappy “trailer” made of short video clips titled Innocence of Muslims]. State-backed Islamic scholars in Sudan called for a mass protest after Friday prayers over a film [the same one] denigrating the Prophet Mohammed that originated in the United States, and an Islamist group threatened to attack the US embassy. theatheistconservative.com...


On September 11, 2001 Huma Abedin — Hillary Clinton’s aide for twenty years and co-chair of her current Presidential run — was working for an organization located in the offices of Saudi Arabia’s Muslim World League. www.thepoliticalinsider.com...

What is the Mulsim World League's stated goal? A teeny tiny snippet from the monster piece I'm working on:

When you see the piece I'm working on the context of that snippet will take on a whole new meaning....

So what we have is Huma applauding the "protests", in Egypt, just few days after the Egyptian protest at the US Embassy, on 9/11/12.

We have what appear to be multiple accounts also connecting high level Al Qaeda to the protest affair.

The leaked email that brings it all together, by Huma Abedin, is addressed to "H".

It all stinks of "Arab Spring" type material.
edit on 20-9-2016 by IgnoranceIsntBlisss because: (no reason given)

I've heard this before!

Well then. wait we shall...

I count 7 but okay

Honestly, I wasn't keeping up back then, and am playing catch up on this theatre right now. Maybe there's nothing here, maybe a lot more???
edit on 20-9-2016 by IgnoranceIsntBlisss because: (no reason given)

originally posted by: IgnoranceIsntBlisss
Okay I think I got it enough rolling. Thanks!

Honestly, I wasn't keeping up back then, and am playing catch up on this theatre right now. Maybe there's nothing here, maybe a lot more???

Some OPs just need time to fully develop and we have the Wikileaks October surprise additionally...so plenty of work ahead.

originally posted by: JinMI
Not sure what he's going with but I pulled this:

Hillary "inspired" the protests around the Muslim middle east at that time? Huma just pointed the finger at Hillary for making the film "Innocence of Muslims". This is what she told the families caused the attacks, now we see Huma is giving her credit for it. There is no way out for crooked Hillary on this one.

Yes, you got me. That's what I care about. I'm jealous. Have you ever seen my post history? loI. I was just making an observation.

I think that it's easy to interpret that a million different ways but if you want to make some sort of case, you should probably see what Clinton was doing in the days immediately prior to see if she could have somehow inspired people to protest and then work from there. Notice that inspired is not in quotes but "peaceful" is. If she meant it in the "inspired" *wink* *wink* way, I'd think inspired would have been in quotes.

If she hadn't put "peaceful" in quotation marks (scare quotes), it would seem far less sinister. Perhaps you should look over more of Huma's emails and be on the look out for words in quotation marks to determine if she uses them to denote irony (which is what one would assume) and rule out something like emphasis (less likely).

No response I assume?

Okay. Are we to assume that Hillary herself did the cinematography and editing and distribution and such of the film. And that she set about the start of that start-to-9/11 released product in a few days? Good thing she doesn't have any minions to carry out her operations, because after all if she could pull off that promotional operation with just her and Huma alone, image what fury she could perpetrate via masses of minions and billions of dollars plus a year of preparation.
edit on 20-9-2016 by IgnoranceIsntBlisss because: (no reason given)

TinfoilTP
+13 more
posted on Sep, 20 2016 @ 11:31 PM
link
There were violent protests all across the Muslim world fueled by crooked Hillary.

Hillary was working for the Muslim Brotherhood, not the United States of America. This proves it and it is sick.

She will go down with hillary. No pun intended.

Altho I don't know who would flip on who first.

Gotta get into Chelsea's emails too.

If it makes you feel better ante, I star your posts before I read them.

On the serious side, I don't really buy your interpretation here. I don't see how the quote marks have anything to do with it. If this document is legit, and if H is Hillary (which I am pretty sure it is) then there seems to only be two explanations.

The first is that Huma is actually saying Hillary has a role in the protests. This is devastating if this is true for obvious reasons. Maybe Hillary was trying to spur a demonstration to justify some action, but it got out of her control. Or maybe this was exactly as she had planned. Either way, game over if this is proven true.

The second option is less sinister, but still pretty bad. Maybe Huma was just joking with Hillary. If she thought joking about this three days after her "friend" Stevens was killed along with the others, then Huma is a disgusting piece of trash that should no longer be employed. And if she thought that Hillary would be amused at this joke, it shows she is disgusting too.

No I will grant, we still need to verify the document is legit.