Does Thought Use Higher Dimensions to Function?

posted on Sep, 4 2016 @ 11:00 PM
link
A lot of people know intuitively that the way we think and our own experiences are more than just physical. We don't think of ourselves as part of the physical realm. There is a scientific explanation for this: a quantum theory of mind.

One of the explanations of this experiment is the existence of multiple universes. There is basically the present, which is where we are now, and there are multiple futures. Those multiple futures exist together in the 5th dimension. I believe that every time we make a choice as an individual we are creating a new universe for each possible choice we made. The choice we make determines the universe we exist in after the choice. However, as recent scientific experiments are confirming, that other choice's universe does exist, just as much as this one.

So if the Orch Or theory is correct and the thought we experience is a quantum process, that means that it is more than what can be explained by classical physics. I think that has great implecations.

I gave you a S+F for a thought provoking thread. However, I like to keep things simple and build upon what is learned and then evolve. The old Occam's Razor philosophy.

Basically as I see it, your discussion boils down to causal. Cause and effect! One action causes another reaction. From an individual perspective. Yes, my choices will lead me somewhere possibly completely different than where I am today. Thought---the process of reasoning, deduction. Action--doing something with those thoughts that changes things.

Not sure what that has to do with other universes though.

to the op: The problem with Orch-OR is that, like all Cartesian theories of thought, you end up with turtles all the way down.

Here, I was drawing the picture. 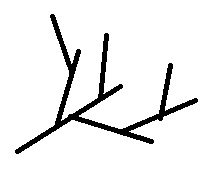 The lines represent timelines. Every time a living thing makes a choice, the timeline branches off, as you can see here, this is a diagram of choices.

Let's make this an interesting thread. What are some problems Orch Or has?

Rolling a die does not change anything.
Everything that will happen has. Free will is an illusion.
The trick is in the sequencing. Ask a Trafalmadorian.

originally posted by: darkbake
a reply to: Bedlam

Let's make this an interesting thread. What are some problems Orch Or has?

Cartesian dualism ends up in an infinite regress, for one. That's sort of a show stopper.

It's an interesting question however doesn't every study use the dimensions we can experience and that seems to work fine.

We are too early in our studies to dismiss the impact of potential other dimensions however we seem to be doing fine without it so far.

Experiments are starting to show this to be the case, such as this one here.

There is not much evidence right now. But it is something to watch for as we grow older.

Does Thought Use Higher Dimensions to Function?

Yes it does, thoughts are non-physical, but just a projection.


If parallel universes exist, the 5th dimension must exist.


False.
A "parallel universe" would exist in and of itself. It may well have more that 4 "dimensions", that is however, irrelevant to our Universe.

originally posted by: Phage
a reply to: darkbake


If parallel universes exist, the 5th dimension must exist.

Free will is an illusion.

I choose not to stab myself in the heart right now thank you. I am looking forward to those cheeseburgers and hot dogs I will have tomorrow on Labor Day. The question is just how many I will eat? And more importantly, how much I will drink....I believe I have total control over these things that 'I' do, however, if it rains on the party, well 'take-out' is fine with me. Always nice to have a back up plan.

originally posted by: darkbake
We don't think of ourselves as part of the physical realm. There is a scientific explanation for this: a quantum theory of mind.

I think a better explanation would be that we can gain better understanding by emotionally removing yourself a level. The same reason you give better advice to others than yourself could explain evolutionary advantages to this duality in our heads.

Not my style but didn't hate it.
He's far more poetic than I am, but it's the same point.

Take a giant step outside your mind, it's the only way to get perspective.