Massive Barrage of Aftershocks From 5.2 Quake in Southern California- ? 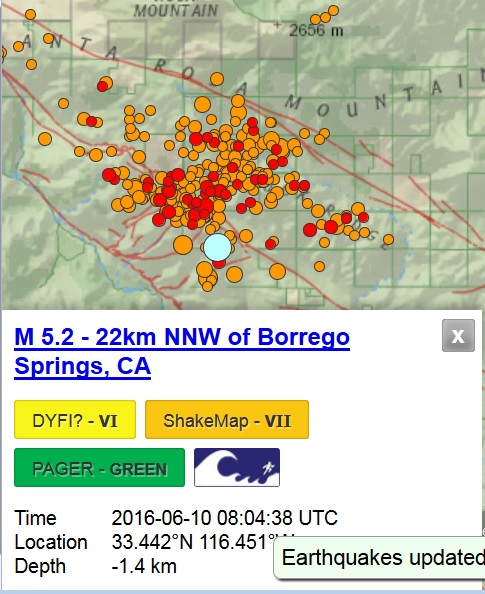 I say uncommon because for a 5.2, that is WAY too many aftershocks, imo- in such a short period of time. Another 3.6 just hit a minute ago, after that screenshot was taken.

So for me, this is raising the question of whether this quake could have destabilized something in those mountains, and the possibility of another larger quake. Note the weird depth of the 5.2 at -1.4 km. Just a heads up to those in Southern Cali.


ETA: The other possibility is that the 5.2 was actually bigger than that, closer to a 6.0- and they are still gathering data on it. It is possible USGS could change the magnitude.
edit on Fri Jun 10th 2016 by TrueAmerican because: (no reason given)


ETA2: Interestingly, just about every single aftershock is showing depths of between 9 and 15 km- as opposed to the main shock at - 1.4 km depth (above sea level in the mountains) Hmm...
edit on Fri Jun 10th 2016 by TrueAmerican because: (no reason given)

Glad I just left there yesterday morning. Not a day too soon.

Definitely something to keep an eye on.

The pattern of the aftershocks is strange, radiating out east, north and west- but not as much to the south of the main shock. I am just sitting here kinda baffled. I have my rig up and tuned in, watching them come in one after the other.

posted on Jun, 10 2016 @ 06:42 AM
link
Is this on the San Andres?
Someone posted an articles a few days ago, saying it was long over due for "the big one", so could this be a good thing? Relieving pressure a bit at a time instead of a big bang?

No, the 5.2 occurred on the Anza section of the San Jacinto fault zone, a southern offshoot of the San Andreas. The problem is, the aftershocks are creeping north towards the San Andreas and might set it off ( I hope not).
edit on Fri Jun 10th 2016 by TrueAmerican because: (no reason given)

If you follow the plat movement from the past few months, the location of large quakes is moving north. I didn't notice the shift till a couple weeks ago. When we got a couple of earthquakes on the Mexico coast line. Looks like the Pacific Plate is rotating counter clockwise not just shifting west.

I just kind of hoping it's just blowing off steam and it'll die down be for it becomes something really bad. At the best end we'll get a few large quakes and it'll die back down. On the worst side we'll get a large quake setting off the San Andreas Fault which in turn could set off Yellowstone.

originally posted by: ObjectZero
On the worst side we'll get a large quake setting off the San Andreas Fault which in turn could set off Yellowstone.

Umm, have you ever looked at a map?

I took a day trip a month ago thru that exact area...Jackass Flat CG.

Took UsFs road from Warner Springs north 20 miles to Castro Valley. No one was in the single campground along the Cleveland NF Reserve area...just open space for many miles.

The terrain is those rocky nobles eroded round-like...so no threat of damages to anything.
edit on 10-6-2016 by Granite because: Sp

I wonder if it has something to do with the testing they were doing in the desert that was supposed to interrupt GPS.

posted on Jun, 10 2016 @ 09:07 AM
link
Lots of little events are better than periods of silence. As long as the plates keep moving, thats a good thing.

Thank you OP for always keeping us informed. And this isn't the time to ask, I know, but sometime, would you please explain what this rig is that I hear about?

posted on Jun, 10 2016 @ 10:16 AM
link
I really dont know much about earthquakes so these questions are just meant trying to get your opinion.

What is that makes this abnormal? The qty, that they are all localized, some combo of both?

But in all seriousness, we had military GPS jamming tests going on in the China Lake/whole Southwest recently and now we are seeing a bunch of odd quakes in the area as well? Hmm, I wonder if anythings connected here. I'm sure its not, but I just smoked and this is where my head went, haha

posted on Jun, 10 2016 @ 10:28 AM
link
I am about to introduce a new term known to few if any on ATS, but known to the volcanology scientific community. It is called a "distal earthquake swarm". This is a condition that occurs prior to many a volcanic eruption, and was discovered fairly recently by a couple of scientific researchers. It has been used already successfully in predicting a couple of volcanic eruptions.

I will leave it up to you, those that really want to know, to search this out for themselves and learn.

But the point here is this: the Salton Sea area has a volcanic history. It might be possible that this massive swarm is a new "distal" magmatic intrusion. They typically occur around 15 to 20 km from the actual volcano. I admit, it is a highly unlikely theory, but it is possible. Please, research this thoroughly before commenting on this post- and perhaps you will see why I am suggesting this. The quakes are at about the right depth and about the right distance. Still, rather unlikely.

And no, I will not discuss my "rig". Suffice it to say that it is the total summation of my computer system and my access to seismic networks that comprises it, and that is all I will say.

Update: No further big quakes yet, but small ones are still occurring- and again I say- pretty darn out of character for a measily 5.2.

And that's why I think something weird is up with this.

ETA: note that the USGS has now altered the depth of the main shock from -1.4 to 12.3km depth. Therefore, looks like the main shock was below sea level too.

edit on Fri Jun 10th 2016 by TrueAmerican because: (no reason given)

A shallow main shock with shallow aftershocks = typical pattern, damaging but not normally a precursor to a massive quake.

Something has broken loose down there, and the "crumple-zone" is inland and still crumbling.

Yes, there is pressure being relieved, but is it possible that that pressure was holding something else in check?