How many times is the same off topic video going to be posted?

Are you troling your own thread?

Notice the La Raza members applaud the idea of Obama taking dictatorial powers in order to grant them Amnesty. It of course furthers their goals of conquering parts of this country for Mexico. A goal useful idiots like yourself are helping to make happen.

He made an obvious joke about how difficult it has been to attempt to work with a Congress whose Republican members have made it their policy NOT to work with the President.

posted on Jun, 4 2016 @ 07:36 PM
link
All part of Trump's agenda. He knows what he says will incite this sort of response, just so he can point it out later to prove a point. Trump isn't dumb, he's a reality TV star and a real estate megalith for a reason. Only in America would a classless billionaire actually have supporters. I’m surprised people on this forum actually take him serious given how skeptical we are all supposed to be about what we are told.

We have entered a new age in politics that started with Obama. If liberals are responding this way it’s because conservatives started this way of responding to politics because of Obama for his name, supposed birth in Kenya, and the fact that he's black. Deny it if you want, but the tea party and consequently the rise of the authoritarian right formed because of those reasons. If the right rises so does the left, the difference is that one group rose out of irrational fears, the other rose out of actual fears.

The left is mostly young and will respond more recklessly, but what choice do they have? The older right have money and power to influence our leaders, the young liberals just have their youth going for them. Now obviously there will be people on each side taking things further than they should, but there's nothing we can do about that, it always happens.

Now regarding the whole Mexico thing, they need to stop that, not gonna happen. They need to realize it makes Hispanics in general look bad and hate American, and plenty of people already believe that to be true about us, when its not, but you know, we love to generalize~

originally posted by: projectvxn
a reply to: Gryphon66

Should we take your word for it?

This is the group that President Obama made his comments to.

Nothing about the Reconquista Movement there.

originally posted by: Gryphon66
a reply to: TheBulk

Except they're not generic and vague groups? Do you even know what those words mean? If I was being generic I'd have said "People with grass in their front yard". How is Barack Obama speaking at a La Raza conference generic or vague? It's a specific person (leader of Democrat party, POTUS) SPEAKING at a racist hate group's conference.

Yes because they are.

No. Ironically I'm sure you thought this because you assume I'm a white guy and white guys be racist!

originally posted by: onequestion
a reply to: Gryphon66


No it would have to be a white group simply called "The Race". But yeah obviously they would have a problem (as they should).

You have the same ability to use google as anyone else.

I'm a Hispanic immigrant. Been a citizen a whopping 4 years. I grew up in the US and have been a legal resident most of that time.

La Raza is a racist organization. To them, light skinned Cubans aren't Hispanic enough for them. If you're not Mexican and a staunch supporter of Atzlan and the Reconquista movement, they really don't like you.

If you're Hispanic and show any glimmer of what they consider "whiteness" then you're the enemy.

Oh my, this makes me terribly upset. I actually usually avoid watching videos that portray violence, but decided to click on this one because there was such a to-do by gryphon66 demanding to be shown. I can't believe this crap goes on! And there are people that defend it?! There is no excuse for this thug behavior! It makes me sick. I really despise Clinton, and I actually fear what could happen to our country with her as president, but I would never never think of attacking her supporters! I mean WTF?

Is California going to mexico a bad thing?? As for other states Luke Texas and Nevada etc never happen to many people with guns.

Posting this from a phone so bear with:

First of all, I had no idea you were a "new" citizen. Welcome! I know a little bit about that process and its grueling. Congratulations on making it through.

As to La Raza ... I don't have the personal experience you seem to speak from.

And that's all I'll say. Thanks for sharing your point of view.

posted on Jun, 4 2016 @ 09:01 PM
link
Trump supporters sure are terrible at fighting. These people are getting beat up left and right. Maybe take some self defense classes at the local Klu Klux Klan community center.

The billboard and press campaign, created by advertising agency TeranTBWA and now running in Mexico, is a colorful map depicting what the Americas might look like in an "Absolut" -- i.e., perfect -- world. 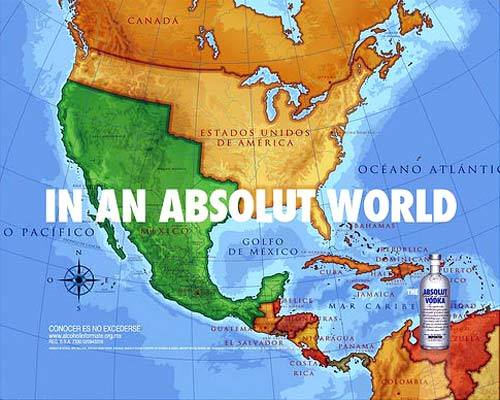 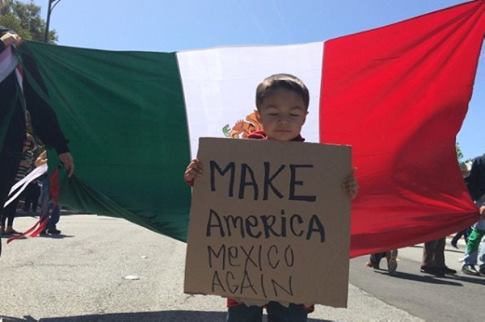 It's not just personal experience. It's a matter of public record.

When I first came to the US La Raza billed itself as an immigrant advocacy group. My mother, new to the country, went to them for assistance with information on English classes and a bunch of other stuff. The never provided that. All my mom got in the mail was what she called "Castro propaganda", and she would know better than I.

La Raza is an extremist leftist group who wear nice suits and can get a professional website done and use all kinds of fancy language to make themselves seem benign.

A group of people who advocate violent overthrow of the US government, racial segregation and supremacy, and white genocide does not represent the "Hispanic community".

Also, to be frank, there is NO "Hispanic community ". People from Spanish speaking countries are as diverse as you can get. Black, white, Asian(lots of Chinese in Cuba), Germans in Argentina, so forth and so on.

When we came here we went on a wholly different path than what the "Hispanic community" of LA was conducive to. We sought education, better opportunity, and never stopped working. The #hole we left behind in LA was filled to the brim with Mexican drug dealers, gang bangers, dangerous criminals and abusers of all kinds.

And yet, all you're relating is your personal experiences and those of your family ... which I respect and have no desire to critique.


Why are they always referred to as "Anti-Trump" protestors/rioters? Why not "Pro-Hillary" or "Pro-Sanders" rioters? Who are they voting for? That candidate should speak out against their violence and directly ask them to stop!

The first thing I said was that it is a matter of public record.

Since you're making a game of being obtuse throughout this thread I will leave you with this:

Watch the videos another poster made about La Raza a few posts up. Use your Google fu, and figure it out on your own.

Of course if these were people attacking and rioting over Obama, the enemy would be clear. Right?