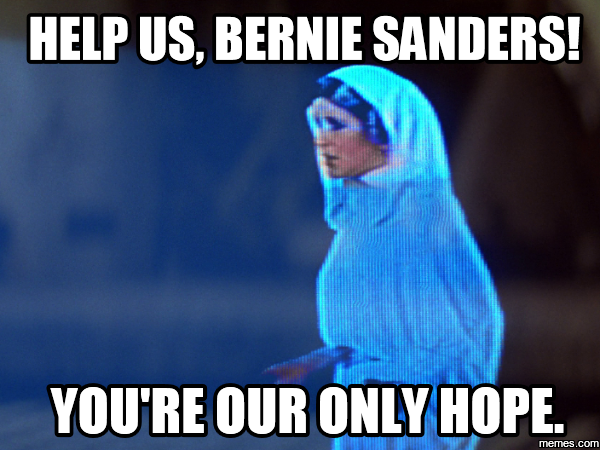 Saner than either of the other two!

Thanks for making me spit up my drink on my keyboard.

Owe! And I thought the voters mattered more than the head Superdelegates. My bad...

Well, all the votes haven't been cast yet and we'll see what happens at the convention.

Owe! And I thought the voters mattered more than the head Superdelegates. My bad...

Talk about some elite BS

I think the only thing shocking about this news, if it's true, is that it wasn't happening sooner. If I was a super delegate I'd be looking to jump ship away from Hillary a lot sooner than now

it's just the MSM and other media outlets who are pretending....
it's been obvious to many of us that those folks are just biding their time. And then they'll pull for Bernie - if they said so now, though, it would just end the 'reality tv' thing.

originally posted by: MysticPearl
Knowing how the Clintons operate, if I were Bernie, I'd make sure the security on whichever planes I fly is extremely tight.

So the Clinton's get away with murdering people, but can't seem to hire adequate network security for a home-based email server?

posted on May, 21 2016 @ 07:13 PM
link
I've been saying for a while now that for the DNC to have any chance in November against Trump they should have Bernie as their nominee - Hillary simply cannot draw enough confidence from either established democrats or swing voters and she certainly won't draw anti-Trump republicans either, a casual review of online political and social forums in the past few months tells me that that demographic will likely vote for Bernie or simply not vote.

It would be great to see a Trump / Sanders race to the finish line - each brings the hope of a completely fresh change to the American political landscape.

I thought I read somewhere (on ATS) recently that superdelegates usually switch to align with the popular vote, if so I hope this is what we are seeing with the DNC as I believe it will restore a lot of confidence in the party if they overtly dropped Hillary for Bernie as a measure to protect the parties short-term future.

There's been one or two who have come out and said publicly that people shouldn't assume that they will stay on the side they're on now. I agree with that.

But I think if they really didn't want to seem like they had made their choice then they shouldn't have been counted for either side until the end.

When people see them all on one side like they are it can sway people to vote with who they think the winner is going to be. This whole time Bernie has had to fight against that as well as other media suggestions.

Which in the end just shows how much more strength he has behind him pushing him this far. But it's still dirty politics IMO and they shouldn't be doing it. If we aren't supposed to be counting the Super Delegates until they vote then we shouldn't count them. Period.

Why should she drop out? She's winning and if there was ever going to be an indictment she never would have run. The indictment is just a republican dream. It's never going to happen. She shouldn't drop out. She's the only one with world stage experience and recognition.

In 2008, When Barack was in the some position that Hillary is now in, apparently very close to getting the few delegates she needs to clinch the nomination, Hillary’s excuse for not getting out, when Barack was close as she is now, as they are nagging Bernie to get out, was this:


She felt that the possibility of Barrack, as candidate in 2008, might get assassinated as did RFK in 1968, made it a good idea that she should remain in the race!


Isn’t that kind of sleazy to say the least?

cynical, sinister or what?

originally posted by: Swills
a reply to: thinline

So you don't believe Bernie that politicians are bought and paid for, corrupt to the core? You think he's lying?

In any case, who knows if there's any truth to this HuffPost Op-Ed piece but so far the super delegates have supported their corrupted leader before the race even started and continue until this day.


Ya right, like he knows. How many has he bought?


originally posted by: MysticPearl
Knowing how the Clintons operate, if I were Bernie, I'd make sure the security on whichever planes I fly is extremely tight.

So the Clinton's get away with murdering people, but can't seem to hire adequate network security for a home-based email server?


Happens all the time in tv shows.

"so what gave me away, detective?"


It's obvious that Sanders is the stronger contender against Trump


Really ? Not a supporter of Clinton at all . However , this goes against all the hypothetical Presidential polls I have seen. Granted I have not checked in a while...

It means that the SD people are handing this to Hillary, this is going to make the Bernie supporters very angry.
What percent will come around between now and November is a huge unknown variable, what we do know is that Hillary supporters did come over to Obama despite the bitterness between the groups, and he won against McCain fairly easily in 2008.

This is not 2008, the climate has changed and it's the year of the maverick statesman candidate. Many Bernie supporters will never vote for Hillary, some were for Ron Paul in the past even, they for sure would never ever cast their vote for her. Some SD people actually might be worried about Trump now, before the primaries Hillary seemed like the best to put forward against whatever the GOP put up, after Trump ascendancy they are having serious second thoughts.

I will say this, and mark my words, if the DNC has a contested/brokered convention and Sanders loses and isn't on the ticket, Hillary will lose for sure. Some Sanders people have already said they will either stay home or vote against Hillary by voting for Trump; not that they even like him, but just because.

originally posted by: Sillyolme
a reply to: Swills

The indictment is just a republican dream. It's never going to happen. She shouldn't drop out.

I call BS on this statement. I'm far from any GOP stand, yet I fully believe that she should be behind bars

Your rhetoric is getting old and dare I say... Silly

Do you understand how the Commission on Presidential Debates works??

Why did Mr Sanders choose to run democratic after years of being independent?

Why did Ron Paul run Republican when he's so far from your core GOP?

When you figure that one out, you'll understand why people have to vote(and campaign) R or D under the current system if they want to win