posted on Apr, 26 2016 @ 07:28 PM
link
Sanders (my vote) gets Rhode Island and as the precincts reporting goes up , so does Sanders close the gap in Connecticut .Why wasnt Sanders attacking the Hitlary from the starting gate ?

Sanders is winning in Rhode Island, and doing well elsewhere.

originally posted by: BlueAjah
Rhode Island has been called for Trump.
4 out of 5 so far!!

He is so far ahead in Delaware that it will be called soon.

All 5 states have already called it for Trump 50+ percent in all states. Cruz? less than 20 ( only in the mid-teens)

NO BRAKES ON THIS TRAIN! 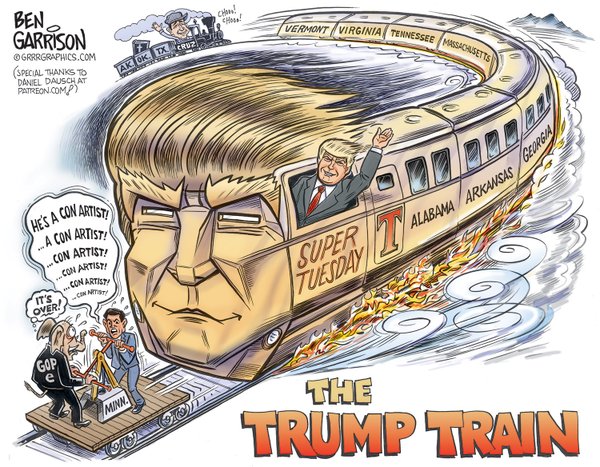 Cruz's numbers plummeted and Kasich is still 4th in a 3 man race (since Rubio still has more delegates)....
edit on 4/26/2016 by Kangaruex4Ewe because: (no reason given)

originally posted by: Gothmog
Sanders (my vote) gets Rhode Island and as the precincts reporting goes up , so does Sanders close the gap in Connecticut .Why wasnt Sanders attacking the Hitlary from the starting gate ?

If Independents were allowed to vote in these states, Bernie would've have gained much more against Crooked Hillary tonight.

If this isn't people waking up and pushing back, I don't know what is. It needs to go further but this is a start.

Bernie folks are seeing this as well.

posted on Apr, 26 2016 @ 07:54 PM
link
July 18-21 is the Republican National Convention. Still plenty of time for the GOP to invent new rules to exclude Trump. If they are successful in doing so, that will be the rightful end of the party.

posted on Apr, 26 2016 @ 07:55 PM
link
where I live in maryland all I see are trump signs, no signs from any other candidate from either party,so in my neck of the woods at least it seems that trump is the overwhelming choice. we are just one little part of one little state but in all my 55 years on this planet i`ve never seen such a huge lack of diversity in any election.I`ve always seen at least a few houses with signs in the yard supporting other candidates but not this time.%100 of the people who have chosen to put a sign in their yard have put a trump sign. maybe the people who are voting for other candidates are just too embarrassed to put one of their signs in their yard this election?


Trump is pulling nearly 60% in each state tonight, but what I find more interesting is Sanders/Clinton battle in Connecticut...

Sanders is looking to take Rhode Island as well.....

Not a peep out of the FNC folks about that...

I agree and I am hoping they realize that before it's too late.

IF they do otherwise, one has to wonder if they aren't purposefully imploding their own party.

This is more of a movement at this point. The people are telling the party that they are tired of the status quo. If they don't listen, then the people should rightfully abandon them.

Not a Bernie guy, but I do appreciate the level of attention folks are getting to OUST the STATUS QUO!!!!

Kick Them to the Curb!!!

Not a Bernie guy, but I do appreciate the level of attention folks are getting to OUST the STATUS QUO!!!!

Kick Them to the Curb!!!

Thats what I am a sayin....
But the people need to keep it up and take this to the nth+1 level. Federal , State , Local , if they part of the "Good Ol Boys and Gals" show em the door and tell em not to let it hit em in the arse as they walk out it.

posted on Apr, 26 2016 @ 08:08 PM
link
only bad thing ive seen for trump so far is that going off vote counts (not all are posted yet) he is getting half the votes that clinton or sanders are getting in these states ,hes still winning by a HUGE margin against his republican opponets but may wanna start to come up with a stratagy to increase his actual vote count vs hillay or less likely sanders

edit to add i stand corrected in CT the numbers are almost on par 55k vs 54k (sanders/trump resectively) but in pa he got a 1/3d of the votes compared to clinton 75k vs 25k trump (as of time of this post )
edit on 26-4-2016 by RalagaNarHallas because: (no reason given)

The raspy whiskey voice is ready to talk.

They would be worse fools than we might imagine them to be to not realize it. I think there is profound damage control going on, and I think the GOP doesn't want Trump, but also doesn't want the voters to be affronted with the reality that their votes really don't matter. Nobody in politics wants that, on either side. The illusion must persevere. Thus, I think at the final hour, the GOP will have to acquiesce or face extinction.

On the other side of the fence, the illusion is still being preserved. Hillary was chosen. Bernie may have the voter support, but not the party support.

I think Trump can beat Hillary. I don't think he could beat Bernie. You look at the numbers of voters in most states, and Trump's numbers trump Hillary's. I wonder if Bernie's supporters will truly throw their votes to Trump when Hillary gets the nomination.

In closed states, the Independents and non-party affiliated have not been counted yet.
When it comes down to Hillary vs. Trump, Trump will gain the above, plus some Sanders supporters, plus some Republicans that did not vote for him in primaries.
The general election will be different than the primaries.