Interesting Poll- How effective were those planned parenthood videos?

posted on Feb, 18 2016 @ 11:09 AM
link
I'm not really sure why I find this poll so interesting, maybe because I think that it gives a clue to how much of a reach the internet itself has.
But, it seems that the majority of americans either weren't aware (43%) of them or they were so emotionally detached that they never commented on them (27%).
Of those who were aware of them, and felt moved enough to speak out about them, 18%, spoke out against planned parenthood while 12% defended the organization.
People over the age of 65 (who never have to worry about getting pregnant again) were more likely to be against planned parenthood while people aged 18-24 were more likely to support planned parenthood.
Surprisingly, there wasn't really any real different between how the men and women responded.
It also gives data concerning race, religion, which I didn't find interesting really...
I am pretty sure that some on ATS own their own business and are promoting that business through the internet. I believe this poll gives insight as to just how effective your advertising is.
Which is why I find it so interesting really.
Well, here is the link to the poll results, enjoy.

Well, I'm glad to see they weren't as effective as I thought they might be.

I find these polls interesting personally, because I usually end up with the same views as young people (18-24), which is a great thing, IMO.

Lol 43% of people didn't even care. That just goes to show you how detached internet communities and internet opinions can get from offline opinions. It really exposes the echo chambers people wrap themselves up in on the internet. If you go to websites where everyone agrees with you, naturally you will think a greater than normal amount of people believe what you do. This is why open mindedness isn't doing that, but letting outside information in. Though it's clear that people, even on this website, still wrap themselves in their personal echo chambers.
edit on 18-2-2016 by Krazysh0t because: (no reason given)

posted on Feb, 18 2016 @ 11:33 AM
link
Looks more like they exposed a lot of over-reacting and hysterical ultra hyperventilating than anything else except maybe it put the PP administrators on a straighter and narrower line.

posted on Feb, 18 2016 @ 11:56 AM
link
The internet is the home of the vocal minority more and more, especially when it comes to politics and social issues.

posted on Feb, 18 2016 @ 12:07 PM
link
I used to support abortion, and the videos turned me 100% against it. So they had an effect on me, and I am only 30. I support aborting the physicians performing these procedures though

actually, that 43% were people that didn't remember seeing, or hearing anything about the videos, not from any online source, the news, or their church or religious groups, or any other source.
of the number of those that heard something about them but just didn't care enough to comment on them was 27%. If you think of the videos as the product, and the time it takes to react and comment about them, with them hoping that those commenting would comment negatively towards planned parenthood. well, only 30% bought the product. Of that 30% who tried it, 12% commented that the product was crap!

This topic is the most disturbing disgraceful thing in the world

The excruciating mental and physical pain .. no woman is anyhow sane to have any opinion re: abortion

Yet here we have people with all the clue in the world having a "discussion" bleh sorry each time I read .. I am about to collapse or throw up .. Sorry

I am sorry to hear about your experience. One of my friends was pushed down the stairs by her ex because she wouldn't give him her paycheck to spend at a bar and lost her baby.

but, considering that 10 of the 25 largest health-care networks in the U.S. are now catholic hospitals who possibly would have leave a patient withering in excruciating pain till the fetal heartbeat stopped because their religious beliefs are oh so sacred to them. or that laws in some states that are written to protect the fetus are being used to prosecute more women for miscarriages than they are men...
I think we need to have an opinion, it's either that or accept that we are second class citizens that can be scrutinized in all our actions while we are pregnant.

Have you read about how the videos were twised and not really showing what was being said? Or does that part not matter.

Yes, you are right. I mistyped slightly, but that was what I meant.

Nope that part does not matter. I still support the abortion of abortion physicians.

you do realize that we did buy the product also, help the word spread by just commenting on it? I find that interesting also, I wasn't actually aware of it till I saw this poll.... through a marketer's eyes.

Yes. I wasn't just talking about the opposition in that post I wrote. Like I said, I mistyped originally.

so a proven fake video converted you from supporting abortion, to actively supporting the slaughter of doctors?

Yea I was wondering the same when I read his responses too...

originally posted by: AmericanRealist
I used to support abortion, and the videos turned me 100% against it. So they had an effect on me, and I am only 30. I support aborting the physicians performing these procedures though

originally posted by: AmericanRealist
Nope that part does not matter. 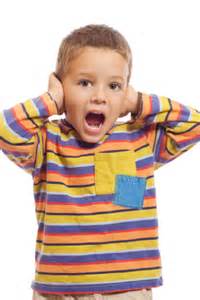 originally posted by: ContraInfo
It is disgusting reading people having an opinion on abortion what ever their "opinion" is

I'd like to hear more about this... What is disgusting about people having an opinion on abortion?

It sounds like you have a very difficult situation and I'm sorry for that...

Why? You say it changed your view but the videos were a lie. Sounds like to me you didn't support it in the first place. Quite the radical shift to come from supporting it to then go to killing the people you at one point supported. And it all being caused by videos that have since been shown to be misrepresentations of what they said it showed.

posted on Feb, 18 2016 @ 03:34 PM
link
I never saw the videos simply because I've already seen more than enough evidence to make it very clear that PP's agenda has absolutely nothing to do with "choice"...

PP cares about one thing and one thing ONLY: depopulation and genocide.

End of story as far as I'm concerned.

Much of that evidence comes straight from the mouth of the founder of Planned Parenthood, who refers to people as 'human weeds'...

“They are…human weeds,’ ‘reckless breeders,’ ’spawning… human beings who never should have been born.” ~ Margaret Sanger

“Birth control is nothing more or less than…weeding out the unfit.” ~ Margaret Sanger

“But for my view, I believe that there should be no more babies.” ~ Margaret Sanger 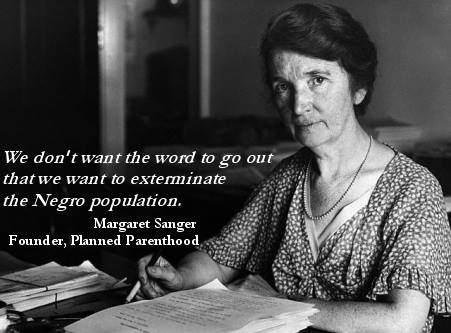 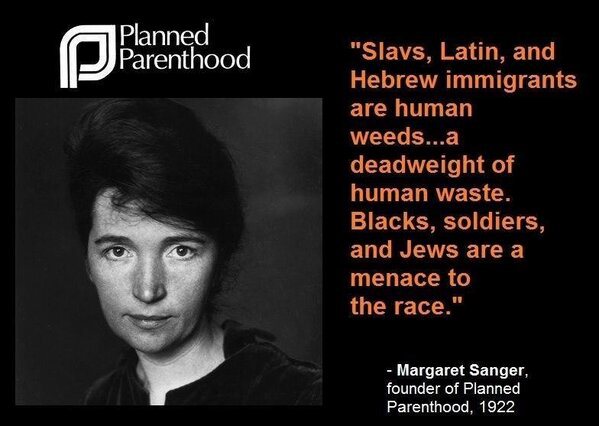 @ 19:50 min. “I think the greatest sin in the world is bringing children into the world--that have disease from their parents, that have no chance in the world to be a human being practically.”Transcript

Wh y this bloodlust on the part of the Illuminati? Why are they obsessed with the urge to commit mass murder? It is a fact that the elite have long been the prime sponsors of global depopulation schemes. The Rockefellers funded Margaret Sanger's eugenics programs and helped her set up Planned Parenthood. George Herbert Walker Bush, as a young Congressman, served as head of Rockefellers' Zero Population Growth organization.

To this day, the elite fund the drive by crazed environmentalists for a "sustainable earth." The stated goal, as CNN founder Ted Turner explained, is to wipe off the face of the earth some five and one-half billion inhabitants, leaving only 500 million alive.

posted on Feb, 18 2016 @ 03:35 PM
link
a reply to: Sremmos80
The videos were not a lie, only the accusations. Every conversation still happened, and the baby outside the womb was not CGI or green screen or puppets. Seeing such horror made me rethink my stance on abortion in general. I think we should remove ALL tax payer funding to any abortion providers, leave it strictly to private funding, and channel the savings to universal health care, or as Bernie Sanders puts it "medicare for all" . That was my reaction to the videos. So where does that put me in the polls??