Super Bowl 50 Flyover - What Will We See This Year?

posted on Jan, 27 2016 @ 10:59 AM
link
In past years the Super Bowl stage has been used for some great demonstrations of US air power. I wonder if this year, being the 50th, will be one of the more outstanding years for aviation enthusiasts. Is there a place where a schedule is listed? Is anyone in the know leaking information about which aircraft will be participating this year? Are we going to see new technology unveiled for large scale public consumption such as during the 2006 (I think that was the year) game where F-22 Raptors performed the fly over to the Star Spangled Banner and the Academy Choirs? Or is it going to be run of the mill technology and performances as listed on a couple sites that is said to include paratroopers and 4 Harrier jets? Maybe they are just the opener?

I hope to see something exciting this year after all the talk on some of the aviation forums here on ATS, and elsewhere, that speculated about an unveiling of a new black project.

So does anyone have any info? In breadcrumbs to offer out to those of us wondering what we may see during the pregame or Half time? Do tell, do tell . . .

We might have gotten something fun if they had been able to keep on the development schedule, but they're so far behind that it'll probably be one of the usual suspects. I'd bet a bomber.

butcherguy
+2 more
posted on Jan, 27 2016 @ 11:09 AM
link
a reply to: nonnez
They should just play the roar of jets over the loudspeakers, with no planes flying over.
Then tell everyone that we have invisible planes.

posted on Jan, 27 2016 @ 11:12 AM
link
If I had a say in it, I'd have a camera pan across the stadium like they were following an aircraft with the caption on the screen saying "The F-49 America's Newest Stealth Fighter".

A locally famous DJ in Honolulu known for pulling pranks did something like that one day. He was playing reports of a B-2 flying past Waikiki one morning, and had dozens of calls from people wanting to know where it was. After a while he said "You can't see it. It's stealth!"
edit on 1/27/2016 by Zaphod58 because: (no reason given)

Lol, I actually thought of that too. Then they could say it was the one out of the commercial with the clouds parting.

A Heritage Flight. They're doing a lot of those now. The F-35 starts doing them this year.

One of my personal favorite Heritage Flights: 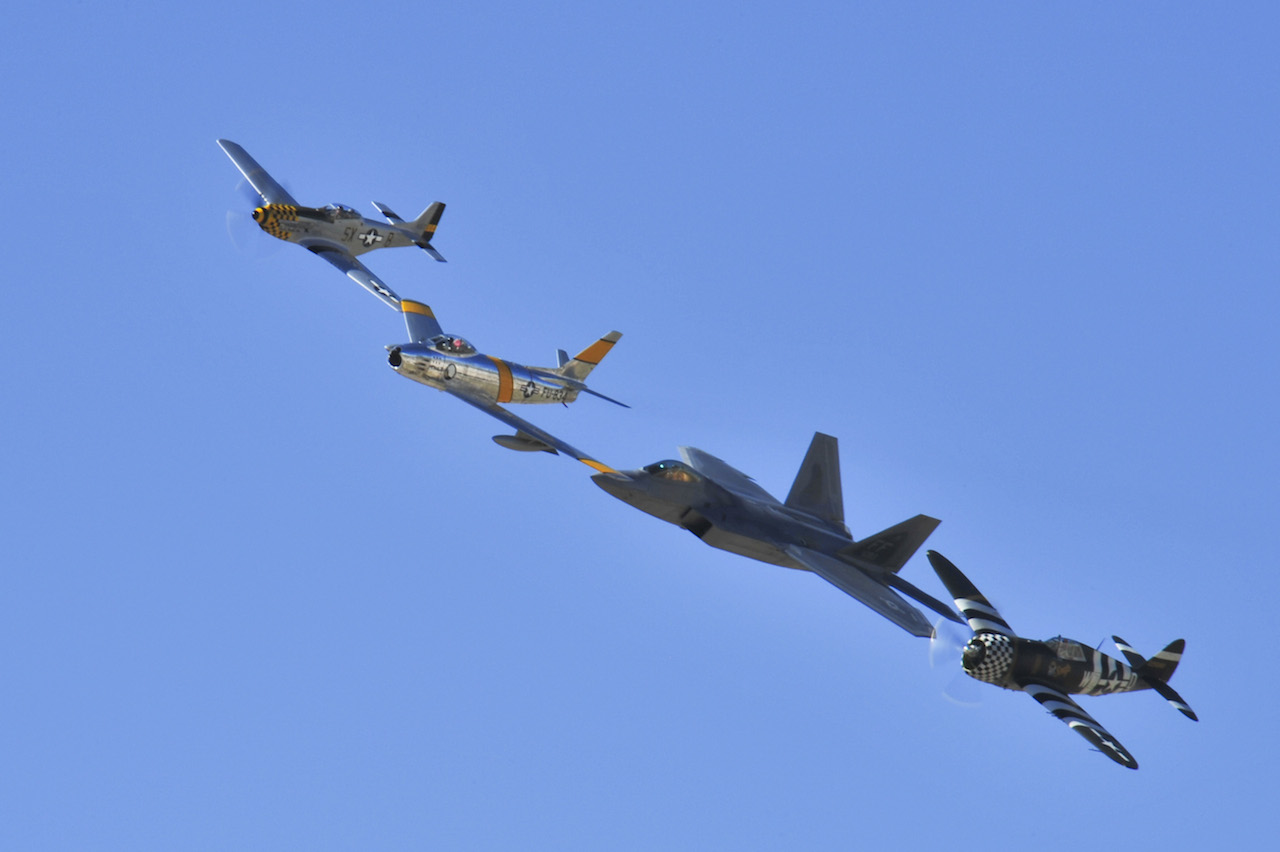 
Surprising to some of you, there have been mysterious, (UFO-like) craft that have done flybys at air shows. --Yes, some have been documented! On something more formal such as the Super Bowl, I would like to think that Uncle could produce a black triangle. --Then they could disallow it being an actual craft because it didn't make any noise. That it was all an illusion or mass hysteria.

posted on Jan, 27 2016 @ 11:41 AM
link
Last time I saw a flyover I was at a Seahawks game in Seattle. It was very very foggy. At exactly the right time three Chinooks flew over at about 200' from the south and literally parted the fog with their passage. It was awesome.

An hour or so later in mid-game the fog lifted and right to the north, like a block or two, literally a few yards away, Seattle's tall buildings popped into view. So those chopper jockeys flew into the fog over the stadium and made an immediate emergency hard left to avoid the buildings and get over Puget Sound. I'm sure they had radar and all that, but Jesus! That took some precision flying.

P.S. NEVER go a game there without ear protection. The sound is so loud that it physically hurts.

Thats a gorgeous pic there zaph. Kudos to whoever took it.

This is a sort of heritage flight of Edwards test aircraft. 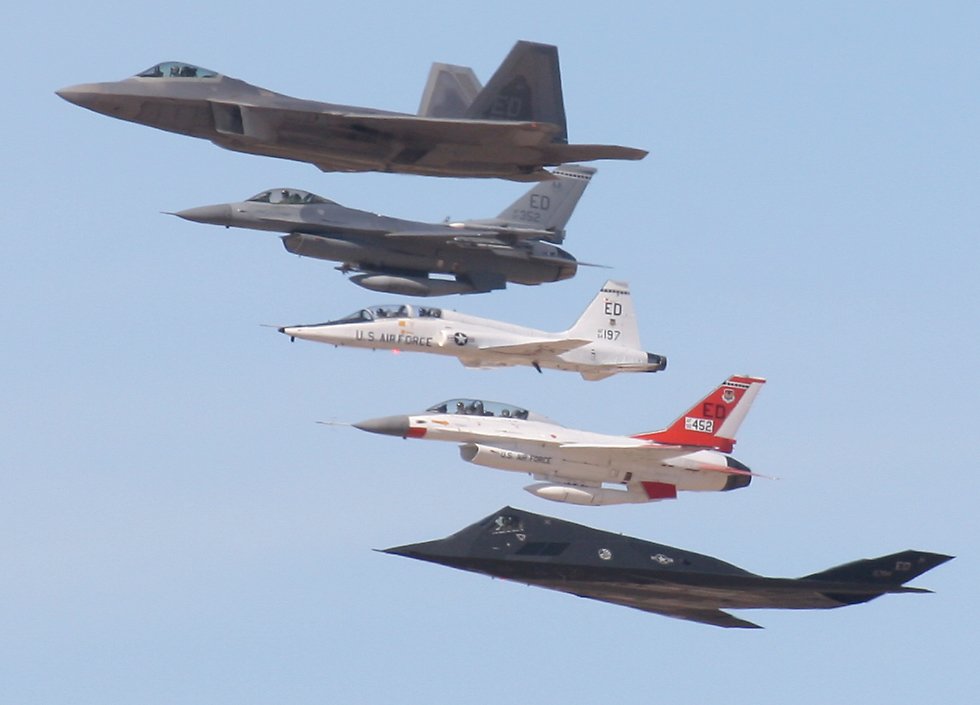 Damn thats a pretty pic too! I wonder what the photo would look like if they were allowed to show the Varsity Team.

I fondly remember Edwards air shows. They were outstanding. BRING THEM BACK EDWARDS!!!!!!!!

Yeah, that is a pretty nice picture. Something like that would be neat too. And then followed by something you can't see at all would be even better!

How about they they crash the party with this: 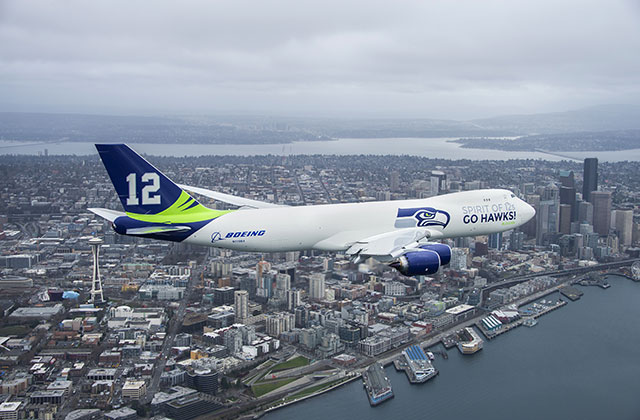 If they can write GO HAWKS! in huge lettering on the belly for everyone to read that would be awesome! Love the skins on that 747. Still my favorite airliner by far.