I wonder how they knew it was a suicide west? Are the CIA making these wests in mass production, or maybe you can go and buy one on Alibaba?

It was reported that wires were seen coming out of his clothes. Better safe than sorry and assume he has one until its determined its not real.


"Fake suicide vests with wires sticking out" are simply the latest fashion rage.....

posted on Jan, 7 2016 @ 07:40 AM
link
Latest reports over here in France are saying the following but all still a little confused for the moment with conflictual reports coming from various news sources :

A man armed with a knife was shot dead by security forces Thursday after attempting to enter a police station in northern Paris.

The shooting took place outside a police station in the Goutte-d'Or area of the French capital’s 18th arrondissement.

A witness who was around 50 metres from the police station told FRANCE 24 that he clearly heard the man cry "Allahu Akbar" (God is great). Police said the man was strapped with a fake explosive vest.

The attack was being investigated as potential terrorism, police said.

Pictures posted on Twitter showed the alleged assailant wearing a camouflage coat, lying on the pavement after being shot. A police bomb disposal robot appeared to be inspecting the body.

The culturally vibrant neighbourhood was on lockdown, including two schools on the same street as the police station, according to education officials. Nearby metro stations were also closed.

“A few locals who live in flats around the police station managed to get into the area, but only after thorough searches from police sources,” said FRANCE 24’s Clovis Casali, who was at the scene.

Casali added that firemen and emergency responders had also arrived at the Goutte d’Or neighbourhood.

i guess the cop that shot him did a search for weapons on him, therefore the spread arms.

Just my guess though.

originally posted by: SLAYER69
Waits for an apologist to chime in
"Fake suicide vests with wires sticking out" are simply the latest fashion rage.....


Could have been 'Death by Cop'.

originally posted by: JohnnyCanuck
Could have been 'Death by Cop'.

All the cool kids are doing it eh?

Nah, likely they will just blame the west and we deserve it, or claim it's the CIA, because you know Islamic terrorists don't ever run around trying to kill people whilst screaming Allan snackbars

Wearing a fake suicide vest and wielding a knife in a Police station will.. 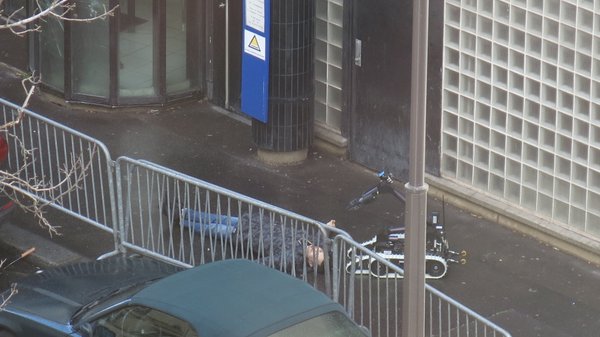 Will ruin your whole day

posted on Jan, 7 2016 @ 08:01 AM
link
Looks more like a work vest that road workers use. What if the road worker was going in to the police station to ask for an electrical connection for the job, or maybe a refill of warm water for his coffee flask?

Clearly this guy was the head chef over at Allah's Snack-bar who was in a hurry for the police to taste his latest culinary creation. Unfortunately he grabbed the wrong package on his way out of the door.

Sources indicate he called his latest refreshment C4. Now the world will never experience the exquisite taste of this yummy delight.

posted on Jan, 7 2016 @ 11:37 AM
link
Can't wait till the French crack down on Muslims, which they inevitably will do, and all the liberals over here clamor to follow suit praising them and how we should always be more like the Europeans.....

You come off as a closet jihadi, in a big way.

RIIIGHT everyone else is sure as hell exactly what it is! these spineless cowards just dont want to sound anti islam, its really pathetic how politically correct even france is. sad times ahead when we cant even call it like it is.

posted on Jan, 7 2016 @ 12:07 PM
link
SO, if I read this correctly, a knife wielding madman, wearing what appeared to be a suicide vest/belt, was stopped from killing anyone by a trained person (or persons) with a gun?

Does that mean that this type of attack should be stopped with a trained gunman on the premises? It sure shows that it is effective in stopping them from killing a mass of people.


originally posted by: JohnnyCanuck
Could have been 'Death by Cop'.


The latest fad? All the cool kids are doing it eh?


You not aware of the concept? Ask any cop.

posted on Jan, 7 2016 @ 02:06 PM
link
Im more than a little disappointed here, some of you people are celebrating the loss of a life rather than the saving of many. I dont agree with islamic extremism (or any religious extremism) but try a little thought first please?
He shouted Allah is great, he had a knfe, was suspected of wearing a c4 vest. The only people entitled to make judgement on that are the people involved.