Are you seeing the trend yet? If you thought the TSA was bad, prepare to be indirectly groped in all sorts of new ways. The government has won. Only blood, sweat and tears will save you now.

SAN DIEGO – The federal government on Thursday began collecting facial and eye scans of foreigners entering the U.S. at a busy border crossing with Mexico, a first step in one of its most ambitious efforts to track people who stay in the country illegally after their visas expire.

Up to half of the people in the U.S. illegally are believed to have overstayed their visas, but the absence of a checkout system has left authorities with no way to identify them.

In a push to change that, Customs and Border Protection began scanning foreigners entering on foot at San Diego’s Otay Mesa port of entry. In February, it will start collecting the same information on foreigners walking into Mexico through the checkpoint.

Have you ever known the government to “accommodate” it's citizens? If you have, you've been tricked by the initial buy-in rhetoric required for them to implement their agenda. The trial run will last through June and extended if the information collected proves to be useful, accuracy permitting. When I mean “extended”, I don't mean at San Diego's Otay Mesa port of entry, but extended across the entire 1,954-mile long border with Mexico.

On Thursday, foreigners put their travel documents on a reader at one of the San Diego crossing’s six kiosks and looked into a camera positioned at arms’ length. The process took seconds. Then, they walked a few steps to a border inspector for questioning.

“It’s very fast, not inconvenient in the least,” said Rosendo Hernandez of Tijuana, who was on a trip to buy tools.


It looks like they've already gotten to Mr. Hernandez. Pay no mind to this lapdog, anything is better than having your balls resting in the cupped hand of some stranger. Safety first! 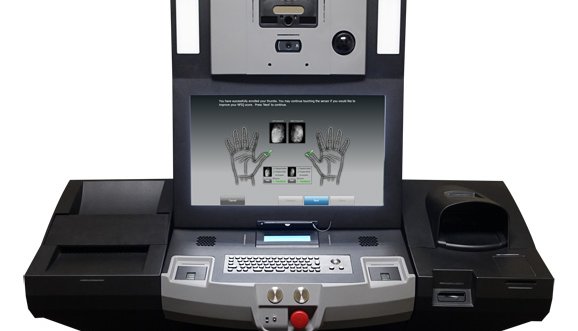 Starting in February, U.S. citizens heading to Mexico on foot will use a separate lane at the California crossing with scanners that collect biographic information, including name and birth date, but not biometrics, Misenhelter said. They won’t have to stop if their travel documents are chip-enabled.


Chip enabled? Yes, all important documents that help the government track and identify you will eventually be embedded with RFID chips. Eventually, most primary forms of identification will be laced with technology in some fashion.

Marc Rosenblum, deputy director for US immigration policy said the effort was to fix “the biggest deficiency in the whole system.”


In my opinion, our current immigration policy has been purposefully dismantled, just in time for the next presidential reelection. If you haven't noticed, politicians make careers out of fixing problems that they've initially created. It's a ruse.

“We have historically controlled our borders coming in but not out,” said Jim Williams, a former Department of Homeland Security official who oversaw efforts to introduce biometric screening at border crossings from 2003 to 2006. “It’s been a lack of infrastructure and lack of investment.”


The lack of investment is bull****. They have the/our money, but they do not have our consent. That's why they're selling this to the rest of us as a way to track expired visa. The current Syrian exodus will further compound the demand for and usage of these machines.

You know damn well, especially with the topic of immigration on the minds of Washington, that this system will be put in place for “someone else” (non-American), and eventually adopted as the new "normal" right of passage for law abiding Americans.

Its about implementation and it doesn’t happen overnight. Immigration will be their way of “excusing” it into border control and eventually checkpoints across the country.

Between 7,000 and 8,000 pedestrians cross at Otay Mesa daily from Tijuana, and slightly less than half of them are U.S. citizens, Misenhelter said. Several had no objections to being scanned.


There it is people. If you haven't figured it out yet, US citizens traveling into the country from Tijuana and eventually the entire US/Mexico border will be fair game. American sheep entering the US will get a “selfie” taken upon entering the US, becoming the first to let themselves be bio-metrically documented.

When systems like NeoFace become more widespread like they're going to be in the UK, having your biometrics on file will help determine if you can or can't access a particular store, event or gathering. They have struggled to control us indirectly through an analog system and the current influx of foreigners, the uninitiated, give them a direct reason to implement added “security”.

The program, which US Customs and Border Protection (CPB) agents are testing for three months at Washington's Dulles International airport, will use facial recognition technology to spot people using travel documents that don't belong to them, CBS News reports.


It appears the ball has already been quietly in motion. Forgive me if this has been previously posted. It's relevant to the topic.

"This is really just the beginning," Harley Geiger, Senior Counsel at the Center for Democracy and Technology told CBS.


Please, tell me more! I just can't wait to travel freely and unmolested in the near future. As long as the chip in my papers matches the biometric check-sum of my face, I've got nothing to worry about, lol.

Marta Alicia Castillo of Ensenada, Mexico, who was headed to a casino, said it was seamless but that Americans should acknowledge that Mexico has the right to demand similar information from visitors if it chooses.

NAFTA and the TPP are happening.

Any added info about the companies involved would be appreciated.

originally posted by: jinni73
a reply to: eisegesis

Long range iris scanning only debuted this year and maxes out at 6 to 12 meters. Typical biometric systems have been used by government agencies for more than a decade and don't require the same precision. These systems work at much greater distances with the ability to scan a multitude of faces at once. After the initial scan, it acts passively, allowing you to be tracked anywhere in any country that uses the hardware. This system will be used to monitor heart rate, expression and anxiety level. How does a retina scan do that?

did not realise the Op was referring to long range but the tech they have got they would be able to do it anywhere and they would of had this for ages Have you heard about the software designed in the 80s called PROMIS they modelled the person of interest TV show on it en.wikipedia.org...

this incorporated 580 thousand lines of code and had a backdoor put into it by the CIA so they could hack into whatever agency bought it mossad and the banks were the first ones to buy it this has been able to track all of us since they started installing cameras in our cities. the first type of surveillance was installed into TVs back in the 50s when every tv had a transmitter which relayed the sound in the room this transmitted to a range of 200 metres, you also have a program installed into every desktop computer that also records the sound in the room where the PC is they can then hack in and listen to the recording of it.

and I meant rubbish in relation to them recently introducing the technology not at you.
edit on 22-12-2015 by jinni73 because: (no reason given)

posted on Dec, 22 2015 @ 09:55 PM
link
Thanks for sharing. Guess it can be seen next in other groups of people coming to the US. Sounds like a test before a bigger unavailing. I know many won't care because they think it will protect them in one way or another. However, that is the trick put on the people. Likely it won't stop there, but it will be born and raised citizens as well to "help protect everyone", already shared by presidential hopefuls as a plan.

Your link is wrong. Here,

What does Promis have to do with the OP? Its an antiquated system that's been adopted by developing nations and criminals. The US had stolen it, passed it around like a cheap hooker and now use it to manipulate "lesser" governments and pseudo-opposition. It has quite the history and worthy of it's own thread.

We're talking passive biometric identification, monitoring and reporting. Promis may have contributed to it's development and is integrated in some way, but until someone can show me that, I'm left to believe its either obsolete or operating under a new name.

posted on Dec, 23 2015 @ 01:20 AM
link
a reply to: eisegesis
PROMIS was the first software built to track us it recognises the way you walk and your face, they don't need to scan your retina in order to track you and apparently it only needs about one square centimetre of skin in order to know its you. can't remember what book I read about it in. the wiki page tells you very little about it whatever its name now promis was the original program and this was implemented years ago.