Cheop’s Pyramid : A theory to explain the internal architecture


originally posted by: Marduk
as has been said before, Rudolph Gantenbrink sent a small robot down the shafts of the GP. This is what he found
www.google.co.uk...=zs2HP6V gM3fe5M%3A

so that's game over for this thread

I'm really, REALLY venturing into the what-if realm here, but what if the entire hydraulic mechanism was used during the construction in order to open the claimed burial chamber, then sealed off (the shaft) upon finishing the structure.

I mean, even if they were just "vent shafts," blocking them off is just as illogical for the same reason--nothing can get in (air, water, or otherwise).

What if there are no secret chambers
did you consider that yet ?

originally posted by: Marduk
What if there are no secret chambers
did you consider that yet ?


Certainly--but then I remember that, at one point, all of the chambers were secret and hidden, which lends credibility to the possibility (and, some might say, probability).

Thanks for your so enlighting response, it's funny how people like you come here and blast away. Idiot? If looking in theory to see what parts could be , or not, true is idiot, then a lot of our current technology has been made by a lot of idiots, taking ideas here and there, doing trial and error to solve problems.

If I would choose an idiot between a bunch of guy doing their best, with many many fails, to uncover part of the truth, and someone coming to ridicule without adding anything positive in its thread, the choice is easy.

Ignorant_ape never said "idiot", he said "pyramidiot", which is, in fact, a rather well-known slang term, coined in the 1930's, that basically refers to the type of ignorant person who blindly believes any of the wild, asinine "theories" surrounding the pyramids, and he was absolutely correct in his usage of the term.

If you'll look at his posting history, it will be quite apparent that he does, in fact know what he's talking about I'm regards to subjects such as this.

Ridiculous claims that go against every bit of evidence we have, without having a shred of supporting evidence of their own, are deserving of ridicule.
edit on 7/2/2015 by admirethedistance because: (no reason given)

Ridiculous claims that go against every bit of evidence we have, without having a shred of supporting evidence of their own, are deserving of ridicule.

Then you just did. And I think he can, if he wants to, make his own response.

If I would choose an idiot between a bunch of guy doing their best, with many many fails, to uncover part of the truth, and someone coming to ridicule without adding anything positive in its thread, the choice is easy.


The idiots you would choose are doing their best to uncover the truth of how to maximize their own profit among the pack of ignorant believers such as yourself that bankroll their fabulism.

Since I didn't buy a thing, but made some reads, looked at videos and came here asking for constructive thoughs (for or against a THEORY) you pretend to know I'm an ignorant believer? Such a great mind reader you are.

Coming here on ATS to ask people 'to get inputs' on a theory is believing? It made sence to me so I wanted to check it here. Made a search on his theory/name, came out with nada so I went for it. Debunking this THEORY: go ahead! But being as%$ and calling names on people seeking infos? (Slang? I know a lot of slang I will never use because it's insulting people, it's called etiquette) I'll serve it back anyday.

I'm ignorant on certain subject (forget believer): ya right! Big time! And I think agreat part of internet is there HELP people getting around just that. But your post also shows one thing: you are so full of yourself it's laughable.

edit on 2015 7 3 by LoveSolMoonDeath because: Typo

hi - we seem to have got off to a bad start

do you disagree with any of my points ???? - if so - pplease cite evidence

the most ergreious example is this one :

look at that pic - untill you spot the deliberate dishonesty

that is not just a " fail " or an error - its a cynical edit of the image to make the hoax APPEAR viable - when it is clearly not - if you apply thier " scheme " to a true layout of the pyramid .

further - all pyramid pymp hoaxes contain the a mixed collection of lies [ to whit ] :

but before you do - the facts are not incumbent on my attitude - remember that .

First and foremost: thanks for replying in such a enlighting way

Yes, the pump system is, for what I can see, extrapolation going far with major flaws as you rightly mentionned. But this is not what my thread was really about. Let me explain: the theory the author develop is not a pump system but a way to activate a mechanism within the Chéop's Pyramid. A mechanism intentionnaly hidden, to protect the true King's chamber. Yes it's far fetched and just a theory but lets look little bit into it. The water insertion point would be the shafts leading to the Kings chamber. I know they're closed from the outside but their position are well known to the builders so they could trace it back again if necessary. 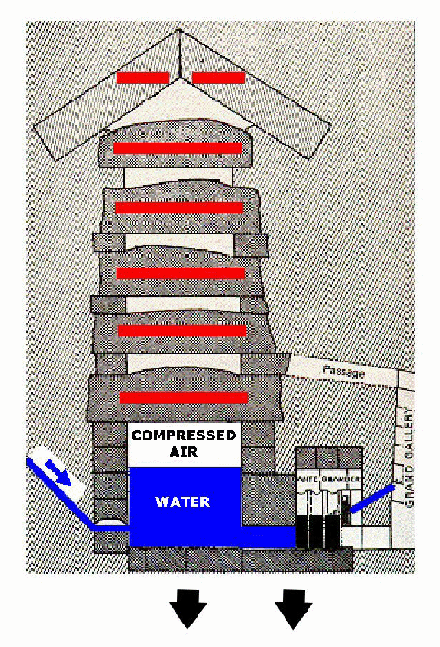 It would be hard and complicated work to bring the water in sufficient quantity at that level: right, a big achievement. But we must keep in mind that those guys actually built those monsters, with great accuracy, so they are more than able in my mind. So no inner pump but water from outside poored in. Then, with the 33 meters water column weight, a block would be pushed in the king's chamber, releasing sand to lower a block maybe? The last part of the mechanism after the pushed block may vary.

Video in french but very graphic and not too long 2:45


And if they went that far to honor their kings,building those pyramids, they'll also make sure he's not visited by thiefs / invaders. What's better than something demanding huge time and efforts, like a big hydrolic lock, to keep then at bay.

The article is there:


What do you think? And yes, it's a theory, food for thought.

so your ` new ` hypothesis fails at the first hurdle - again

posted on Jul, 4 2015 @ 09:20 PM
link
Ok, just to play devil's advocate, how many things are air tight or water proof for over 4000 years? Who's to say there wasn't some kind of liner that deteriorated over time or was stolen (or hidden)? I know. It's a big "what if". Possible but not probable.

so your ` new ` hypothesis fails at the first hurdle - again

the raw masonry of the pyramid interior - was clearly never designed to be either watertight or air-tight - so its age is irrelevant . it would have needed grouting - a process for which there is no evidence .

they have found no evidence of waterproofing - or liners - and due to the nature of the spaces they explored - there is no way that a " liner " coul;d have been removed

so - unless you can propose a " liner " material that decomposes to gaseous waste products leaving no solid residue ???

Interesting argument about the watertight structure and the grouting...I'll look into this further. On the site the original autor implied there were filled joints in king's room with those 3 pics: 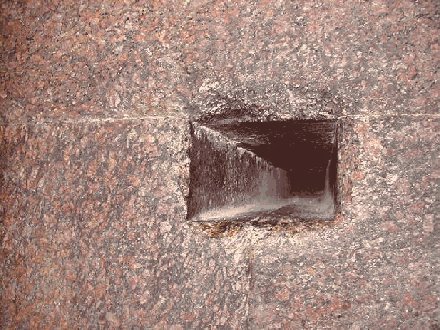 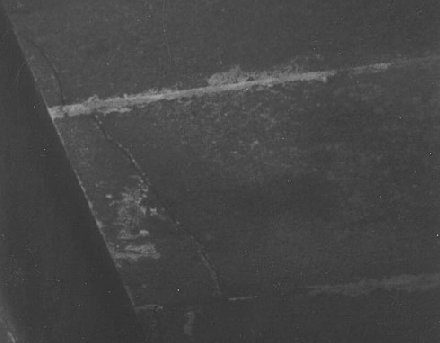 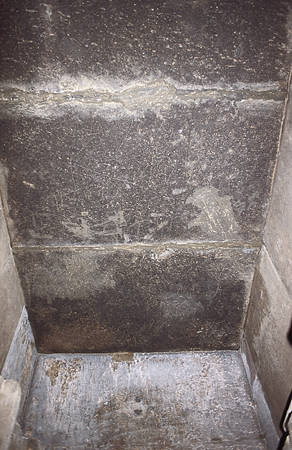 
Just a point about the blocks vs shafts. Correct me if I'm wrong but I thought it was only the Queen's chamber which shafts are blocked and not leading outside. King's chamber shafts, used for filling in this theory, actually leading out.

posted on Jul, 7 2015 @ 01:33 AM
link
I read the link in the original post and watched the videos and it is all very interesting to me. There are a number of researchers and authors who feel that there is a fundamental link between water and the Great Pyramid. There are various ideas as to how the pumping process functioned. I think that the purpose of the subterranean chamber and associated passages was to be a water pump. I think that pumped water was used to supply water locks which allowed stones on barges to be lifted up to the required heights and set in place to build the Great Pyramid. There is a video series showing this process to assemble the Great Pyramid at: www.thepump.org... I hope people watch the video series.

Just a point about the blocks vs shafts. Correct me if I'm wrong but I thought it was only the Queen's chamber which shafts are blocked and not leading outside. King's chamber shafts, used for filling in this theory, actually leading out.

You're wrong, Rudolph Gantenbrink proved that all the shafts were blocked with his little climbing robot more than 20 years ago

posted on Jul, 7 2015 @ 04:09 AM
link
it´s fine to speculate and having fancy pump ideas but these simply end when the actual archeological and architectural hard evidence stands before you.
If you dig in and STILL prefer to ignore it´s just disrespectful against the EA culture.

You, nor anyone else knows conclusively that those shafts were never once intended to both open to the outside surface of the Pyramid and then close again...how could you?

The copper fittings on the slab found towards the end of the shaft could once have been part of the mechanism that facilitated the opening and closing of stones and slabs allowing the shaft to be exposed to the outside air...or water.

Most of the mechanism could have corroded out of existence, or otherwise fouled up and is no longer recognisable as to it's original function...that's the thing with the pyramids, so many theories, so little actual knowledge.

With so much unexplained regarding not just the Giza pyramids, but of those scattered all over this world of ours, it's actually foolhardy to dismiss anything out of hand, even the bizarre.

that's the thing with the pyramids, so many theories, so little actual knowledge.

That's right, hundreds of years of scientific exploration is worthless
to you

With so much unexplained regarding not just the Giza pyramids, but of those scattered all over this world of ours, it's actually foolhardy to dismiss anything out of hand, even the bizarre.


It has a burial chamber, built on the inside of a tomb, set inside a necropolis with a mortuary temple outside, where you claim "unexplained" there, you really are showing your ignorance.
This was almost written for you
en.wikipedia.org...
edit on 7-7-2015 by Marduk because: (no reason given)

originally posted by: MysterX
a reply to: admirethedistance
You, nor anyone else knows conclusively that those shafts were never once intended to both open to the outside surface of the Pyramid and then close again...how could you?

Because the outermost blocks of the pyramid that we see today have been in place since it was constructed, and the shafts stop about 20 feet short of them. It's not difficult to understand.