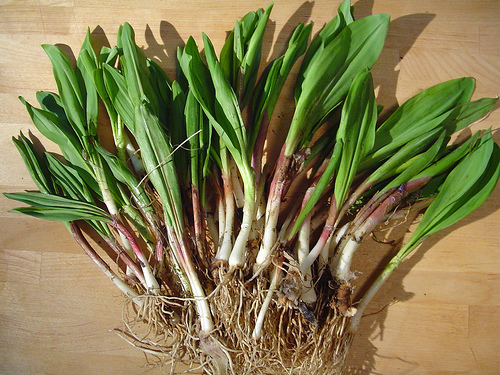 The ramp has broad, smooth, light green leaves, often with deep purple or burgundy tints on the lower stems, and a scallion-like stalk and bulb. Both the white lower leaf stalks and the broad green leaves are edible. The flower stalk only appears after the leaves have died back, unlike the similar Allium ursinum, in which leaves and flowers can be seen at the same time. Ramps grow in close groups strongly rooted just beneath the surface of the soil.[9]

For those of you that don't know, or have been deprived of tasting these oh so good plants, ramps (also called wild onions) are an early vegetable that is found across most of the eastern U.S. They have an onion like odor when being pulled, and also a taste that is much like onions. I like it best fried with eggs, potatoes, and bacon or ham. One thing I should warn you about is that you'll smell like them for a couple of days after eating them.

This site has some ramp recipes that you can try.

Here is a video of somebody telling more about ramps and identifying them.


This video has some more information on ramps and how to dig them up.

I don't know about you, but I know what I'll be doing soon-digging ramps.

Thank you so much! I have never been to get any, but it's on my list of first things to do after the snow melts. I wasn't sure what they looked like, but I do now. I'm really looking forward to it too!

You're welcome. Have fun and happy eating. Like I said, you'll have kind of a smell for a day or so as your body breaks it down but it's well worth it.
edit on 21-3-2015 by Skid Mark because: (no reason given)

posted on Mar, 22 2015 @ 07:42 AM
link
I have these in random clumps in my back yard and along the fence row, but it shows them growing out in the woods.
Is it unusual for them to be in my yard?


The seasonal emergence of trillium, jack-in-the-pulpits and Dutchman’s breeches tend to overshadow another Michigan wildflower known to attract bears and repel vampires.


This onion relative with a garlicky flavor is celebrated with an annual festival each April in Richwood, W.Va., which calls itself the “Ramp capital of the world.” Many other places in that state and North Carolina have festivals for this woodland favorite, which populates many areas of Michigan.

They don't grow anywhere near us, but if they did, I would be out there a-foraging!!!!
Thanks for posting this


For best growing results mimic how and where the ramps grow in the wild. In the wild Ramps grow in shaded areas
(usually under trees) with an abundance of moisture and soil rich in organic matter. Look carefully around your
gardening area for a tree that will provide a moist soil with lots of shade. Organic matter such as leaves can be
added. Ramps grow naturally under a forest canopy of beech, birch, sugar maple, and/or poplar.....

edit on Sun Mar 22 2015 by DontTreadOnMe because: (no reason given)

It used to be common for them to grow in yards but with urbanization it's less so. If they give off the smell I described those are ramps. If so, you're one of the lucky few that still have them in their yards. Good for you.

I had to look that one up. It sounds delicious. I had to bookmark that so I can send it to a friend.

Thanks for the links and added info. My friend is a gardener and she says it's touch and go growing them.

Great idea! I was going through my cookbooks and recipes for this week's meal planning (and shopping list making) and thought to show up here on ATS to look for some meal ideas (getting bored with same old... lol ) and saw your thread!

I'm in the mountains (Appalachia) and while I don't think (?? might have to go out hiking though to check) its quite time for them to be picked yet they soon will and this just gave me some nice ideas for spring! I wasn't thinking about spring quite yet... but your right.. its almost here!

I'm glad it gave you some ideas. We usually go about this time of year to dig them up. Right now we're waiting for things to dry up a bit since it's been wet. We don't want to get all muddy doing it. Good luck and happy digging.