Have to pick up the dog poop these days too or you get fined. LOL

Having said that though, I think dogs are great loyal friends but unfortunately i don't have one at the mo. 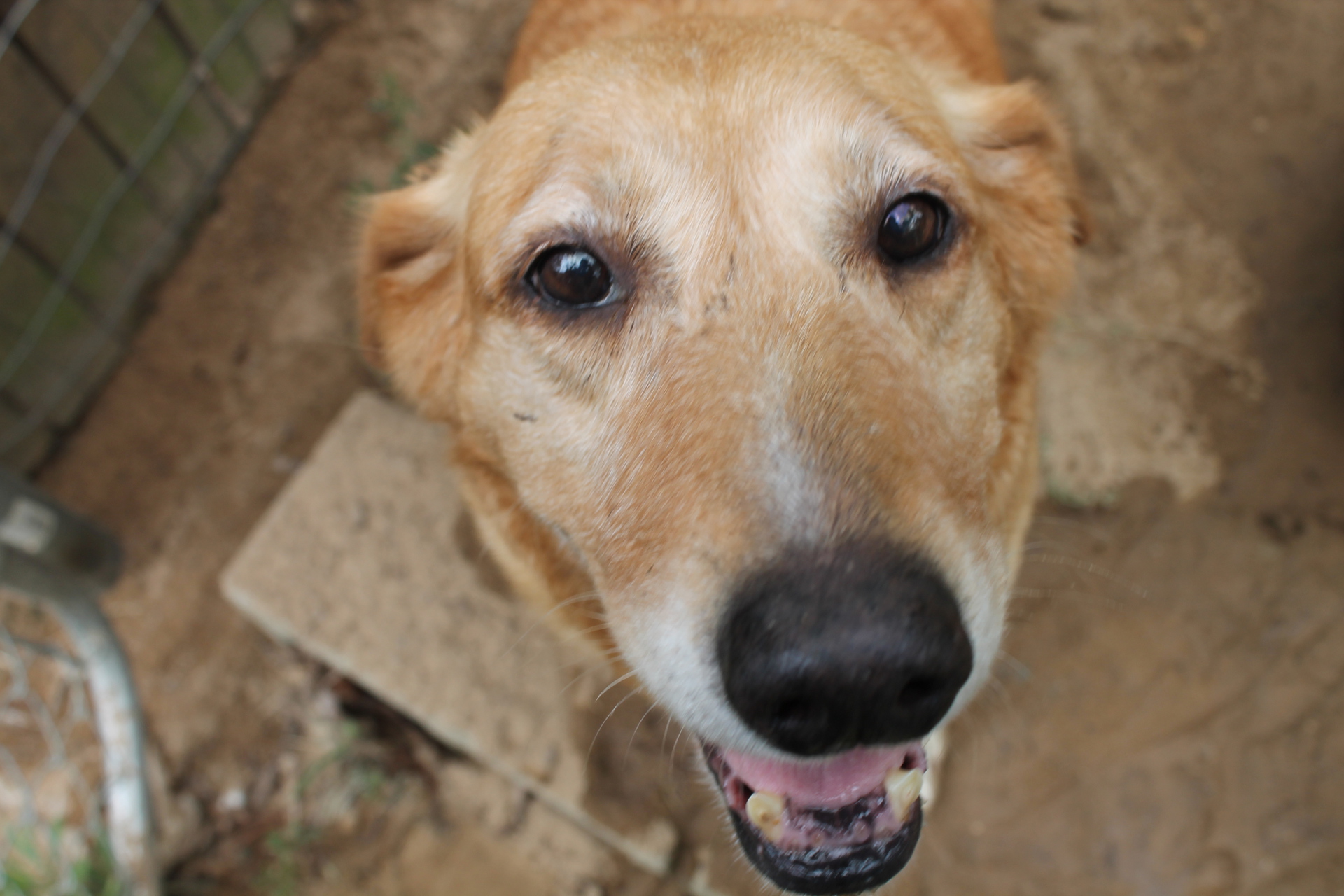 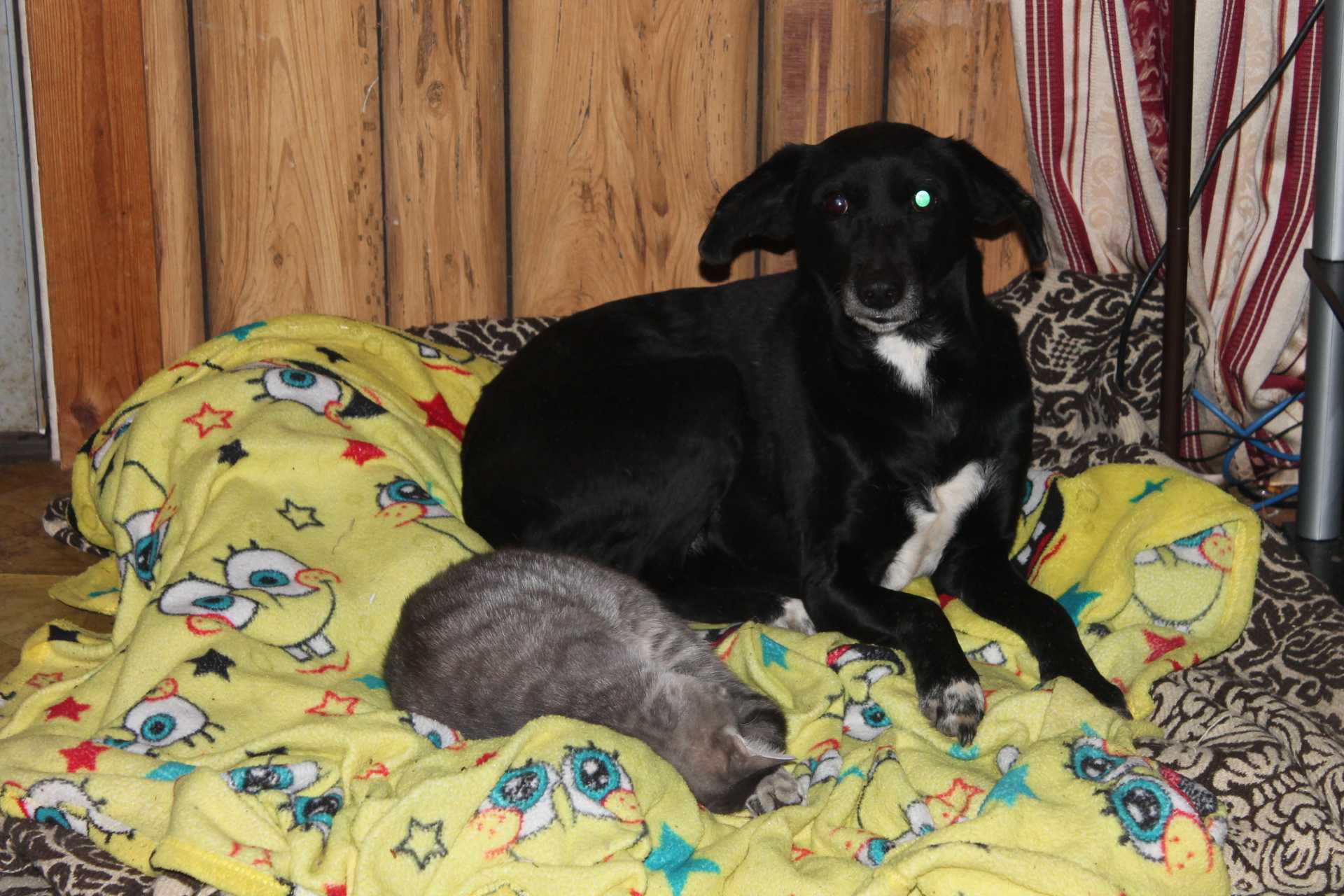 And our newest family member: SA (short for Secret Agent, because she has the number 201 that was bleached on her sides). She's an American Fox Hound that apparently ran off from a hunt and was lost. The day after Christmas, she wandered on to my land, nothing but skin and bones and limped over to me, laid on the ground and looked up at me.

No way I was going to turn her away. 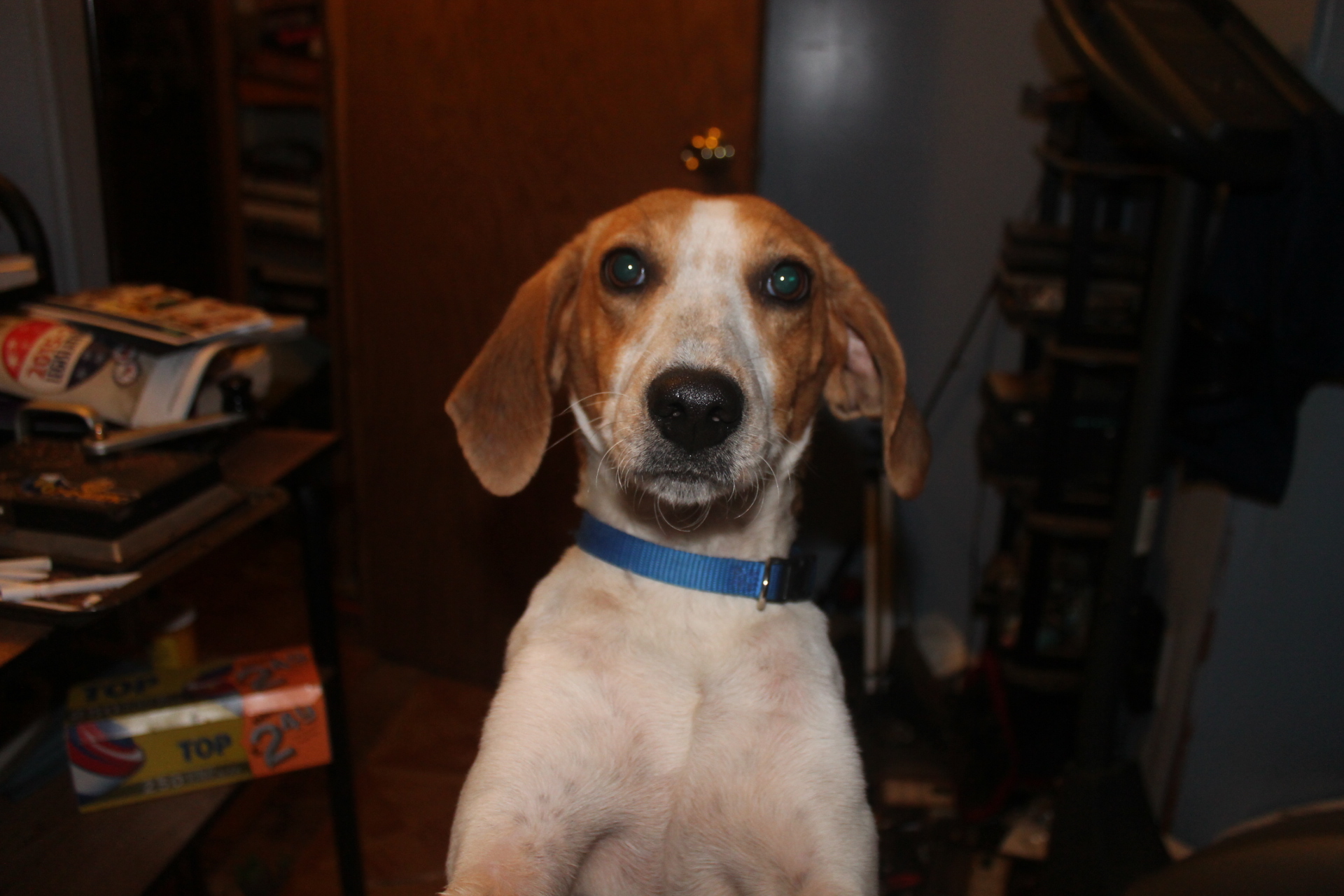 Video of SA interrupting one of my Let's Play videos:

posted on Feb, 3 2015 @ 08:14 AM
link
Wow!, he's great!. I used to have a german shep cross, who also thought he was the size of a cat!, he was very big but had a very nice temprement. Ive never had such a loyal dog as him. He was took off someone who abuised him ( got me in alot of trouble, but worth it!!). When we got him he was around 4 months old, he died when he was 12yrs old, he had a good life, and was spoiled rotten by us!a reply to: pheonix358

These are my four. We lost Mia (left) to cancer in 2013, but we still miss her every day. The other three, from left to right, are: Jaia, B'asia(both 8 years old) and Cara (12 - Mia's litter mate). The two Shepherds are half-siblings about 5 months apart. 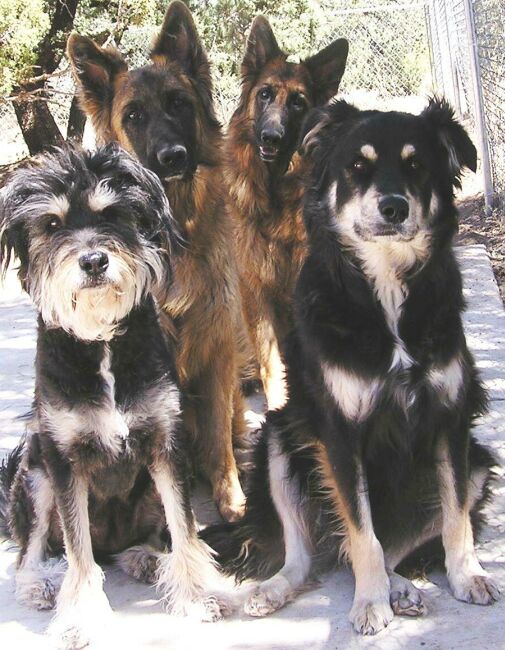 Here's her muzzle from China she's too smart to keep on. It works fine, fits fine, just the dog is way too smart. I think it's the Jack Russell in her. She can get it off in less than a second! Her favorite trick for treats to do now is "High Five". She'll be sitting down, and she'll jump up with both paws and high five just one hand, but warning, you better have a treat for her or she will pout! LOL 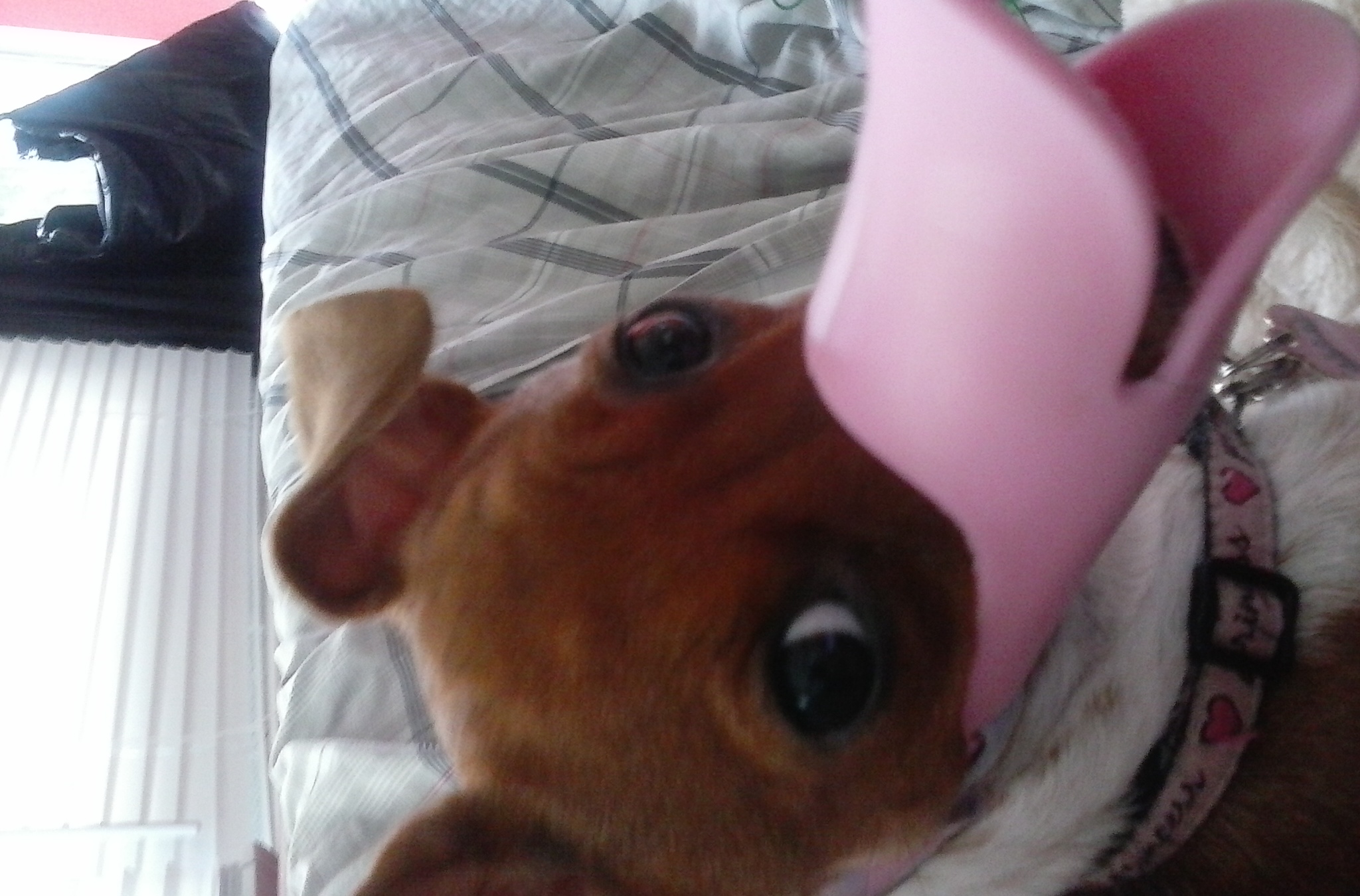 And she loves her outfits! Here's her Halloween T-Shirt that says, "I don't DO costumes!" LOL 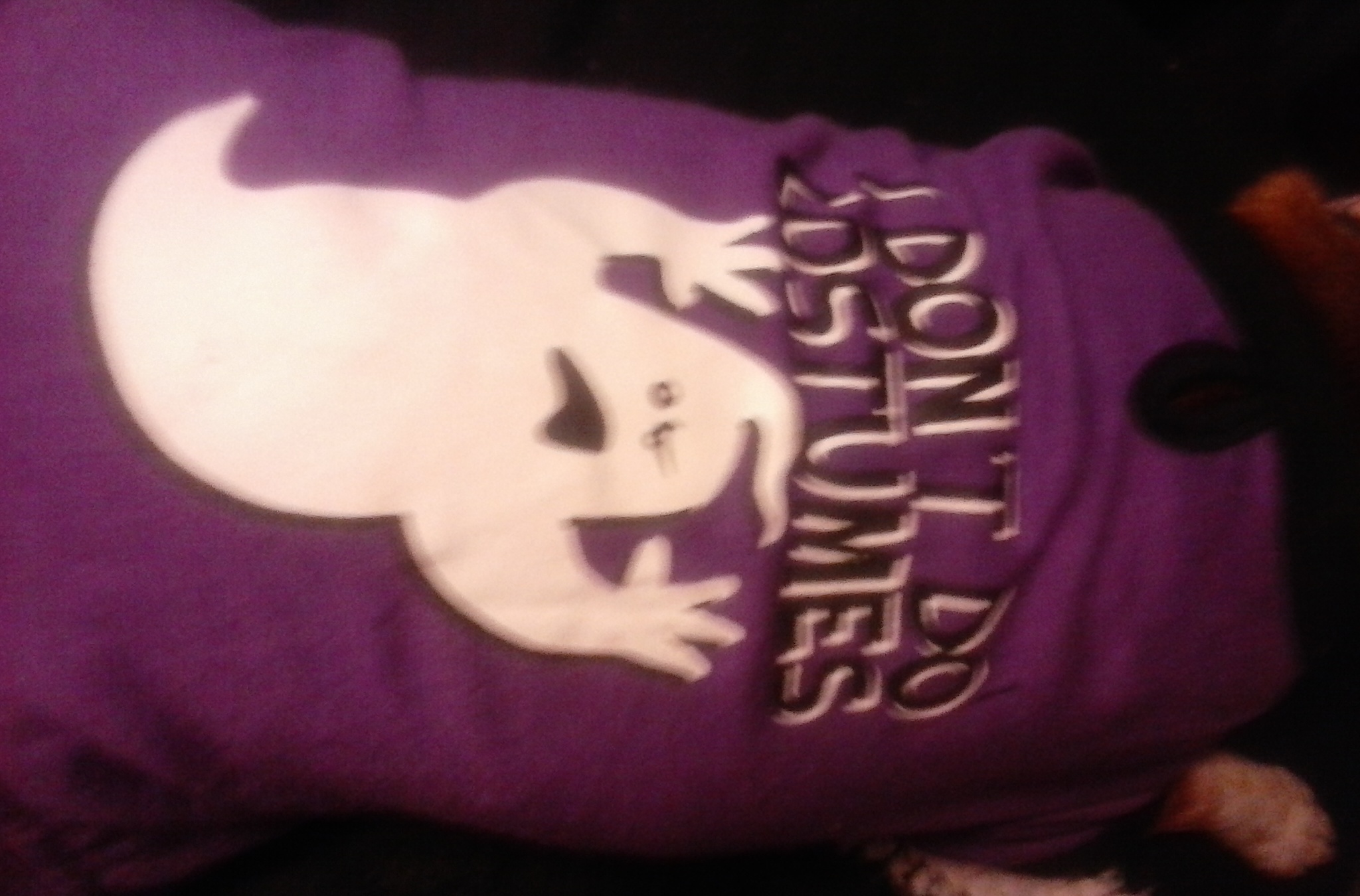 Since she was a pup, and even today, she is a carrot muncher. If you want to make her happy, toss her a bit of carrot. (No not a tiny bit, I mean a nice massive bit that looks like there's no way she'll get through that. She'll eat that over raw hide any day of the week! I've never seen a dog eat carrot before I met her! LOL) 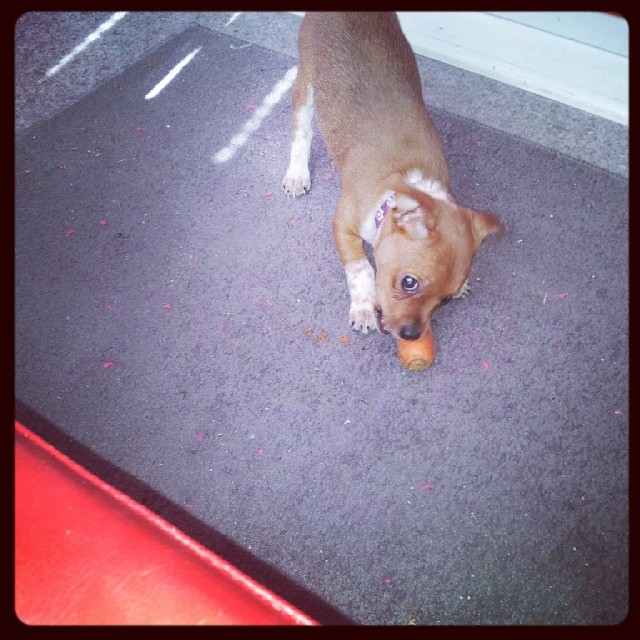 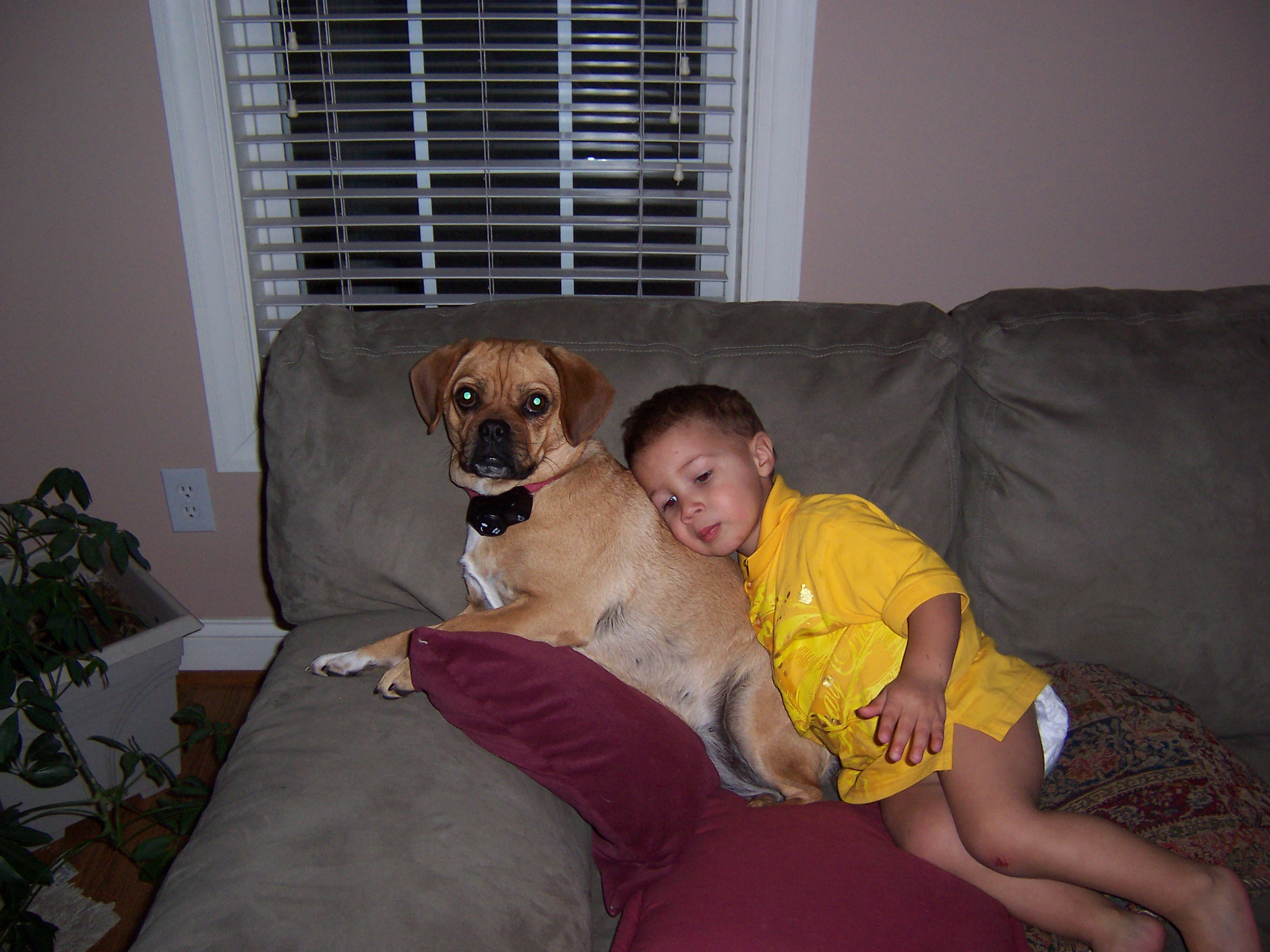 My Poopsie and my oldest grandson. (he is 7 now) And Poopsie left us late last year.
She loved to put on her brand of perfume. (copious amounts of dead whatever animal she could find to roll in.) 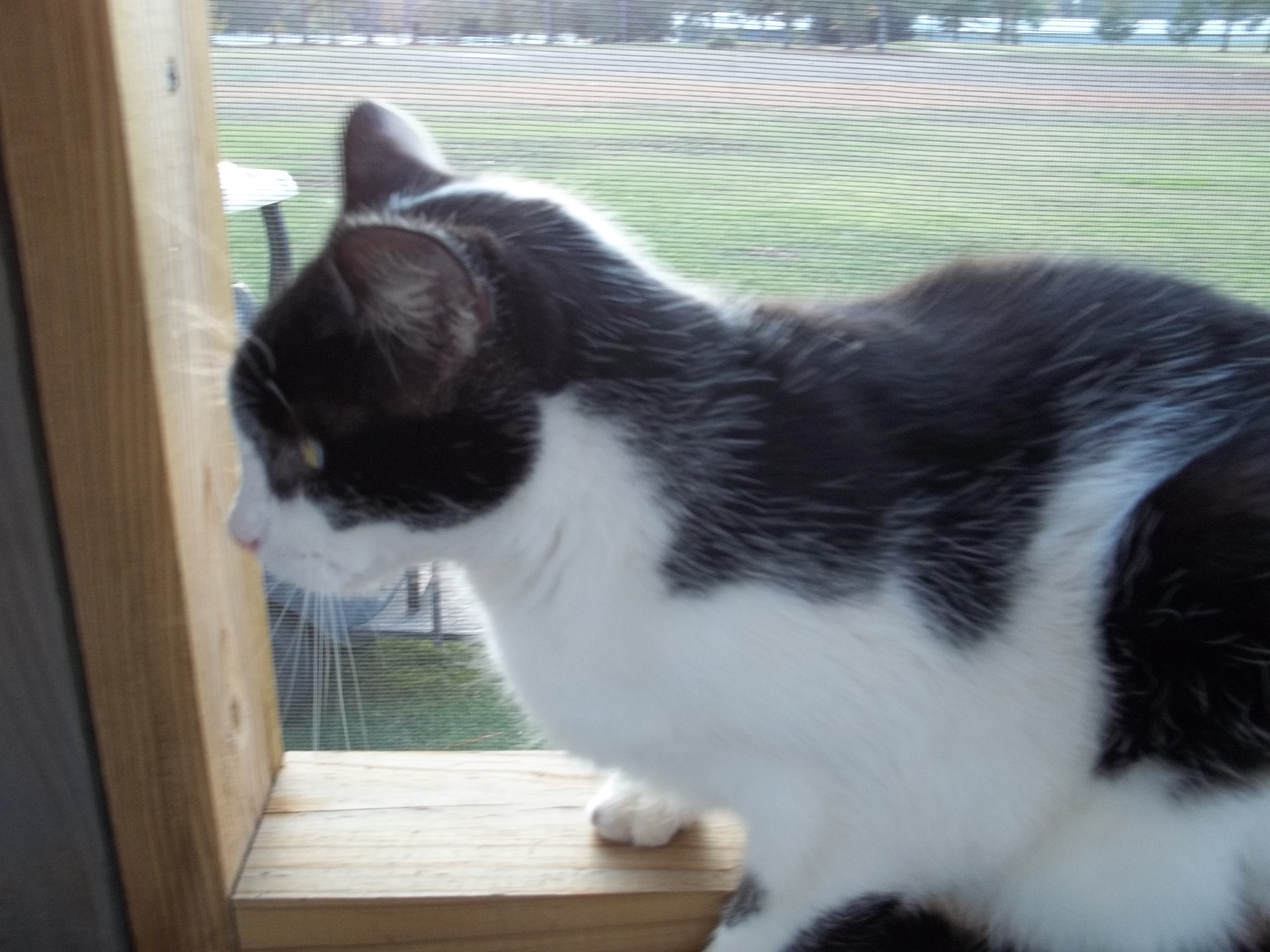 This is Bob, the cat. He's a dick. When he's done letting you pet him, he lets you know by biting you. He's 17 years old, so we let him continue to be around, but nobody trusts him. In his defense, he did bring me a dead lizard the other day, so there is that.

posted on Feb, 3 2015 @ 09:29 AM
link
This is my boy, Jack. He is as loyal and protective as he is beautiful. Solid white German Shepherd. Mr. Dustbowl used to raise these dogs back before we met and Jack was his pick of his very last litter. 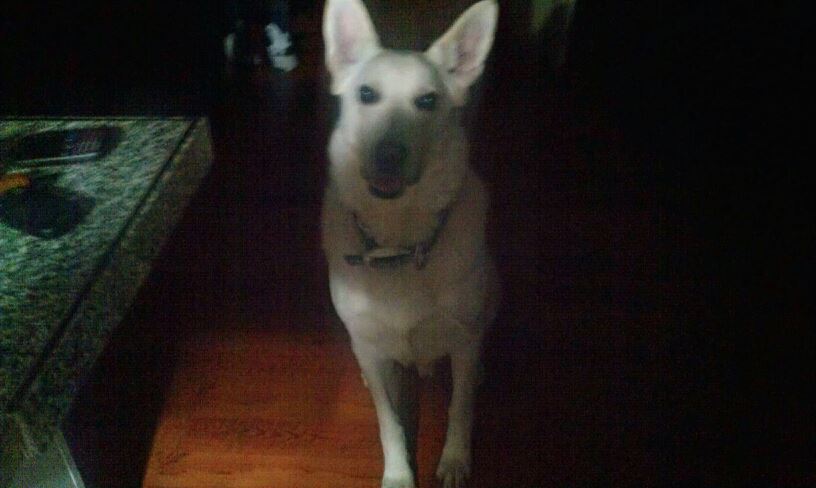 And this is Chunky Brown. She is (most likely) a chocolate lab and was a rescue from an alley behind a grocery store. She's a fat and sassy girl. Very loyal so long as you have something to eat! 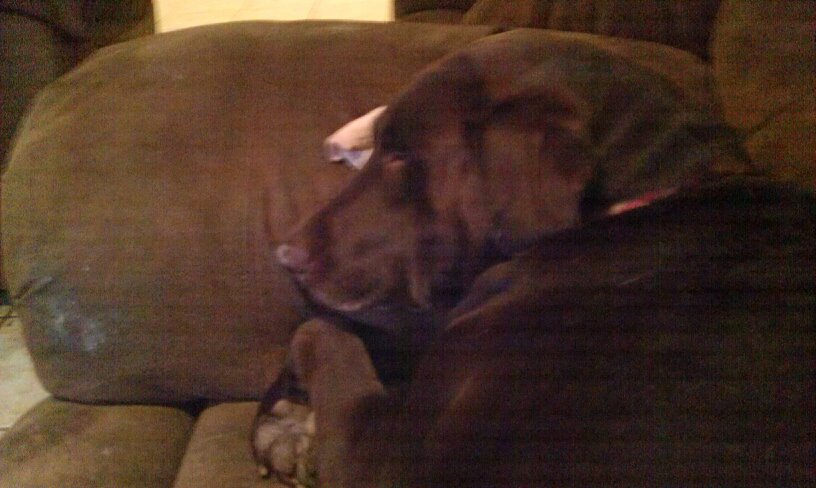 posted on Feb, 3 2015 @ 09:29 AM
link
a reply to: network dude
Bob sounds like my kind of cat!, i used to have a slightly tamed ferral cat, called bastard!!, thats what most people would say after stroaking him!, he would just walk over to you, make the most evil sounding growlly screaching sound, then attack you just for the hell of it, 10mins later gentle as a kitten!!

Here are our most recent dogs. Dozer is an Olde English Bulldog, and Abby is a boxer. Actually the smallest boxer we have ever owned. But very fast, and she beats the crap out of Dozer. He just doesn't seem to have the temperament to put her in her place, even though he out weighs her by 30 lbs.

I would have at least 3 more, but I'm still working on the hubby with that idea.


Im sorry to hear she's in her final days.

Who cut her tail tho?

She's been gone for a few years.
Her tail was already chopped and badly infected when I found her by a creek in the woods. 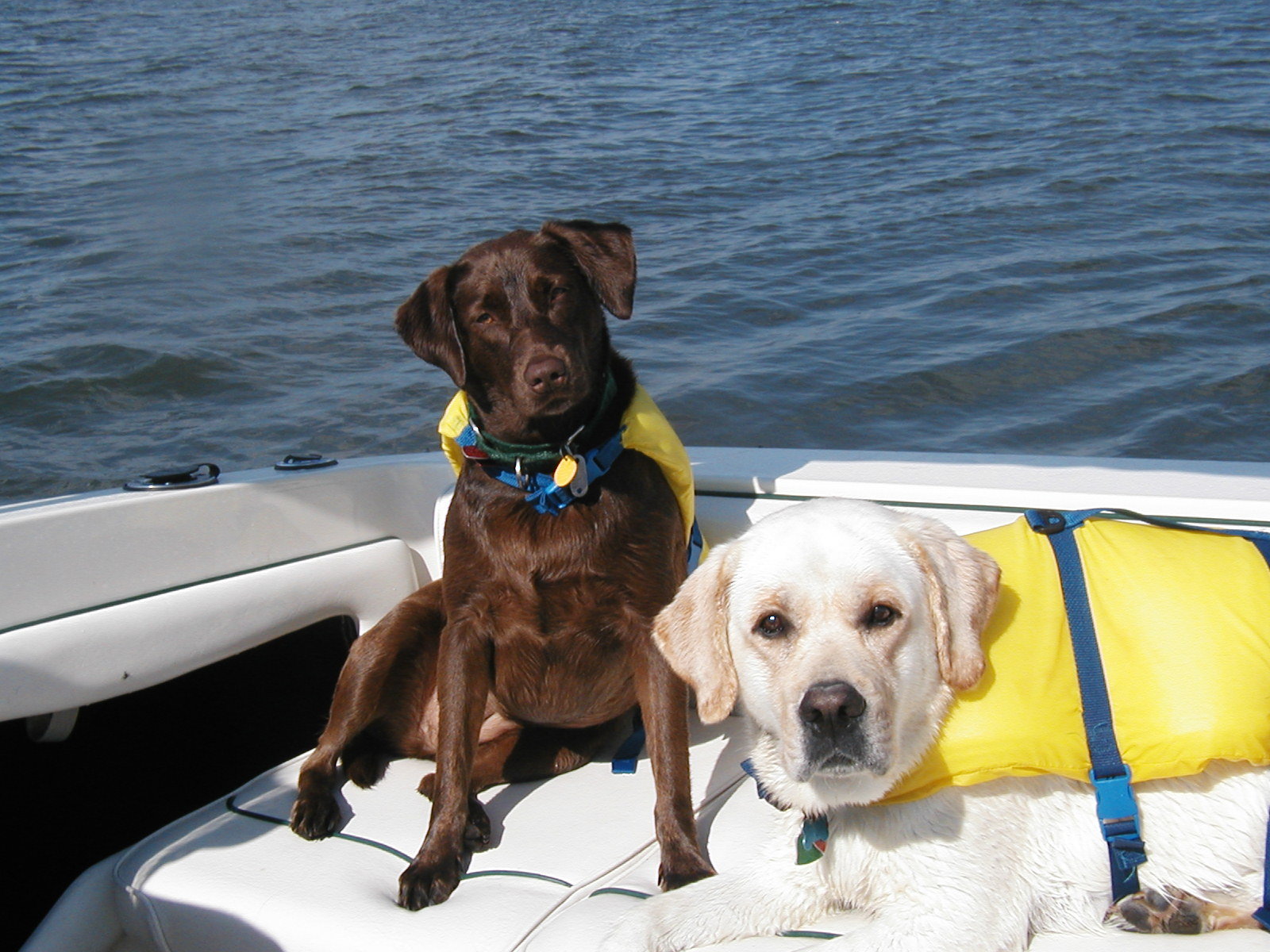 Buddy just recently passed unfortunately, but he had a long happy life even if he was blind by the end of it. He never stopped smiling and wagging. One of the most jovial, kind hearted, warmest dogs i've ever known. Big mushy sweet heart.

As you can see they both love the beach. Swimming, clamming, fishing.

Both Buddy & Bella were rescued from certain death. Bella was raised by a guy who bred prize winning choco labs but developed a mental disorder and abandoned all of his dogs at his farm in PA. Bella was found left for dead leashed to a pole in a barn l that had turned swampy from the rain and abandon. She was very skittish and traumatized until she came out of her shell after some beach therapy

Buddy was dropped off at a kill shelter, adopted by someone who later returned him to the same kill shelter where we rescued him from. He had a number of medical issues that he battled, but you would never be able to tell by his happy go lucky attitude. 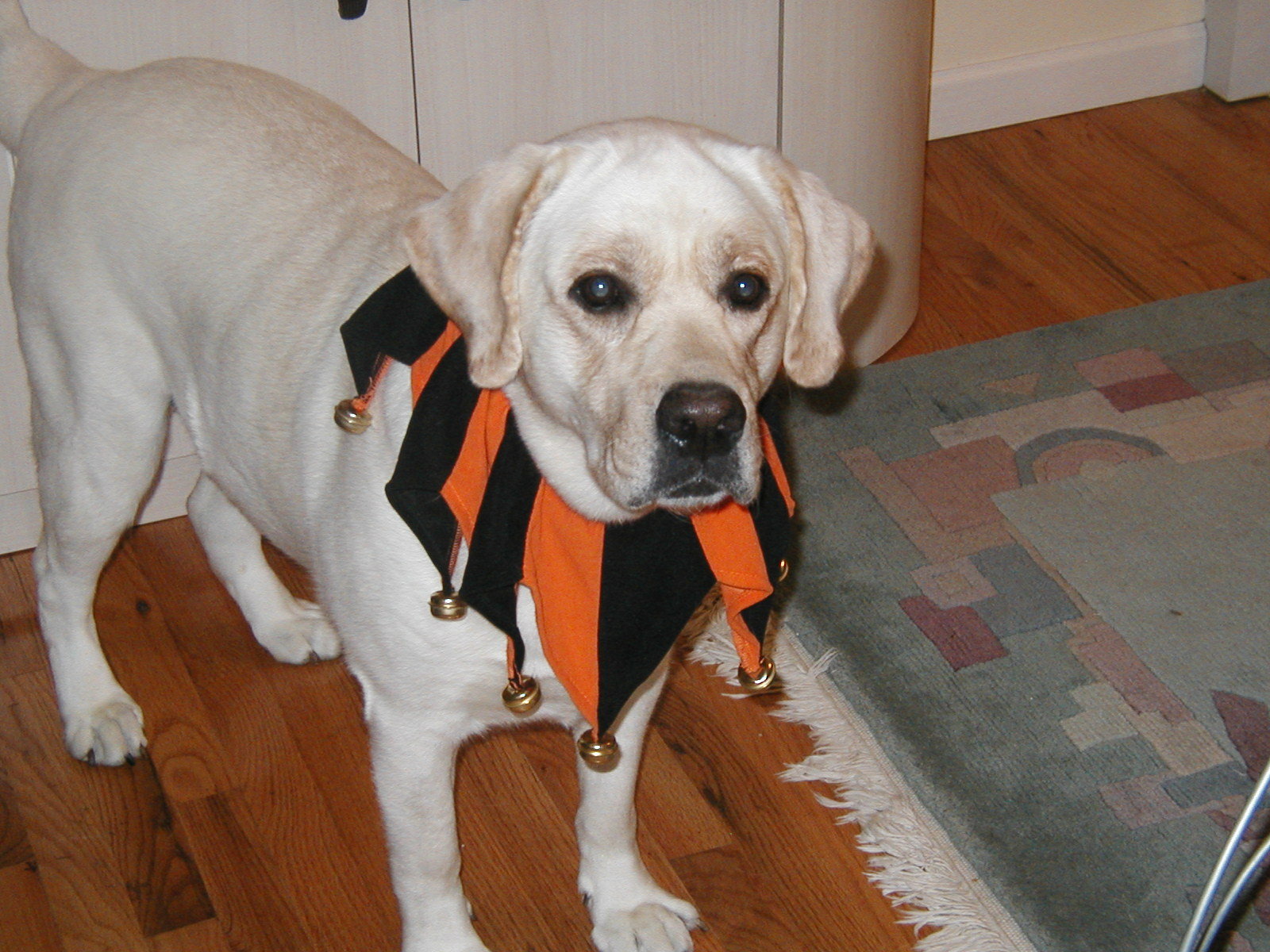 Buddy was a bit of a joker 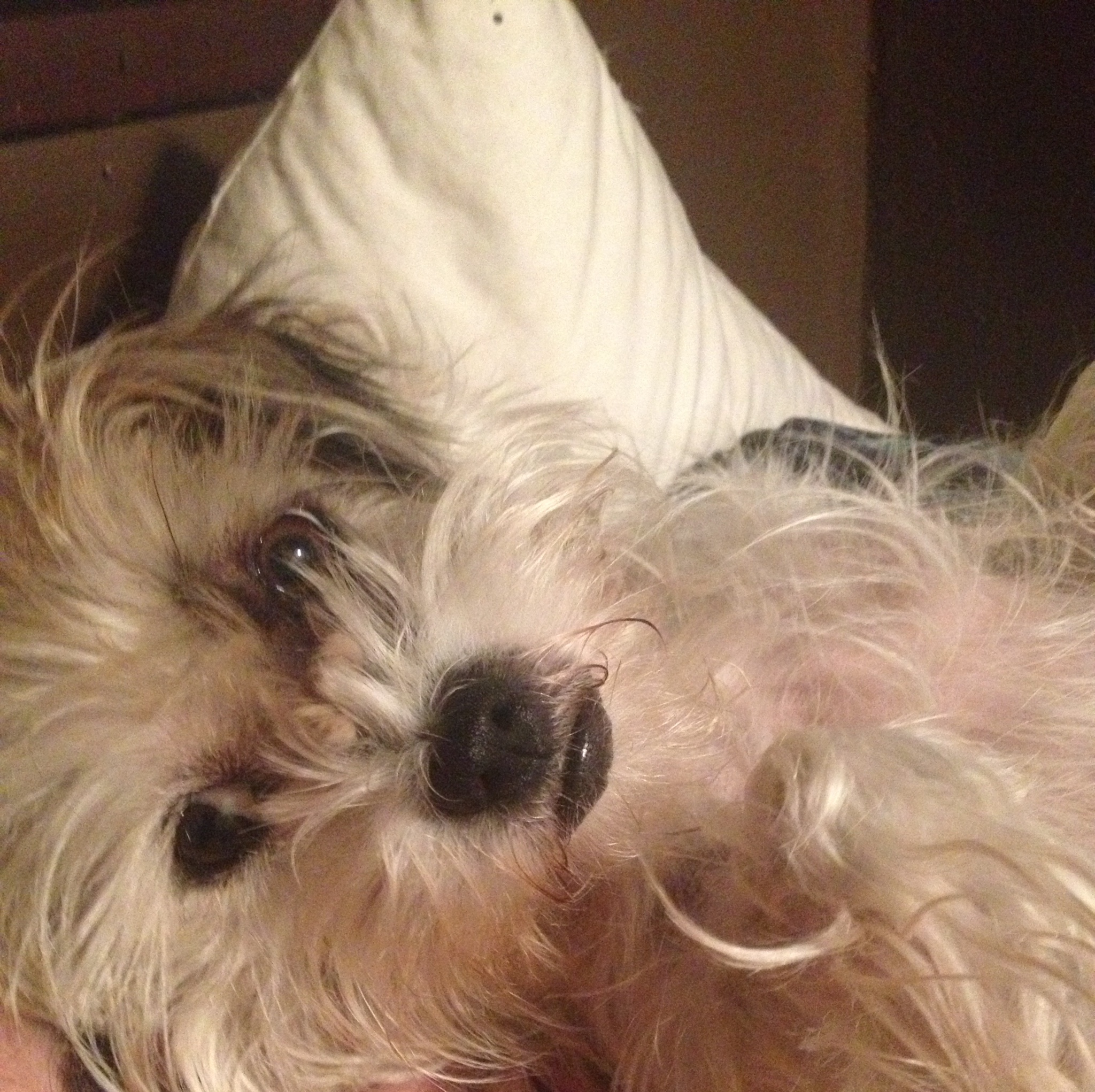 And then there's Rizzy. Another rescue found on the streets of NY, under feed, scrappy, ribs showing. Now living the life of luxury. Im her human sized pillow and her personal chicken dispensary. (you can't tell because i cropped the photo but shes laying with her back on my chest and her head laying over mine) Very smart little girl with a big impressive vocabulary and boundless amounts of affection & energy. oh yeah, and she spots spirit activity all the time...

Sire Gunter - He's a bit of a - uhm - slow learner, to put it very nicely. He may be very (very!) weird, but at least he's very photogenic, so we'll excuse his other short-comings. 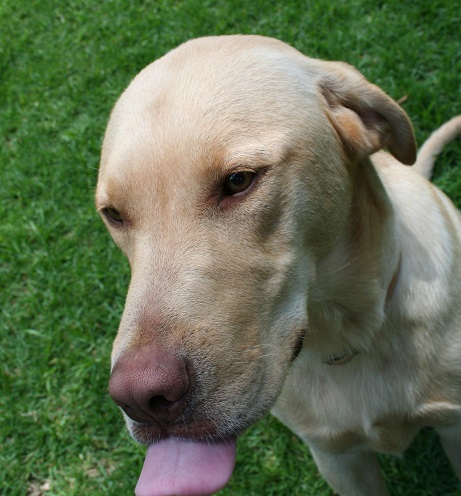 Lady Coco. She's a lady. She does lady things. Oh, who am I kidding. She's no lady, she's very much a tomboy. But she's got an adorable smile. A card she usually plays when she's being scolded. Which works like a charm on me... 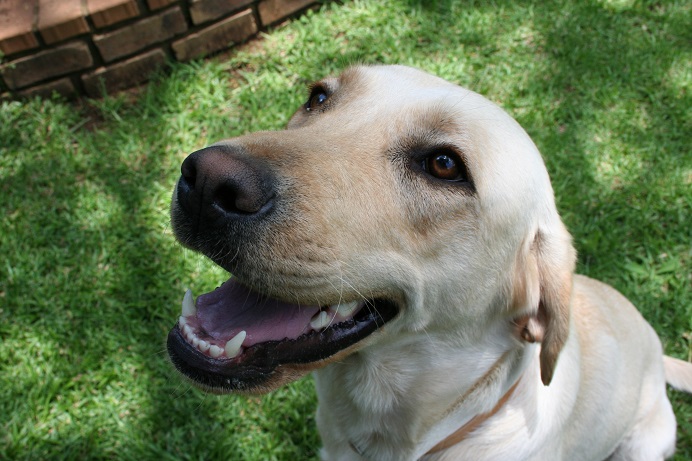 My kids. Love them to bits.

This is Rocky Marciano:

He's a 6 month old chihuahua and has been with me since November. I've been in complete love ever since!

We're currently in the middle of "operation obedience training". His previous owner let him rule the roost (alongside another 4 chihuahuas) and he's going through adolescence... so needless to say he can be a complete swine.

He trots around like Little Lord Fauntleroy and absolutely loves all the attention he gets whenever he goes out.

Now, who said dogs take after their owners... 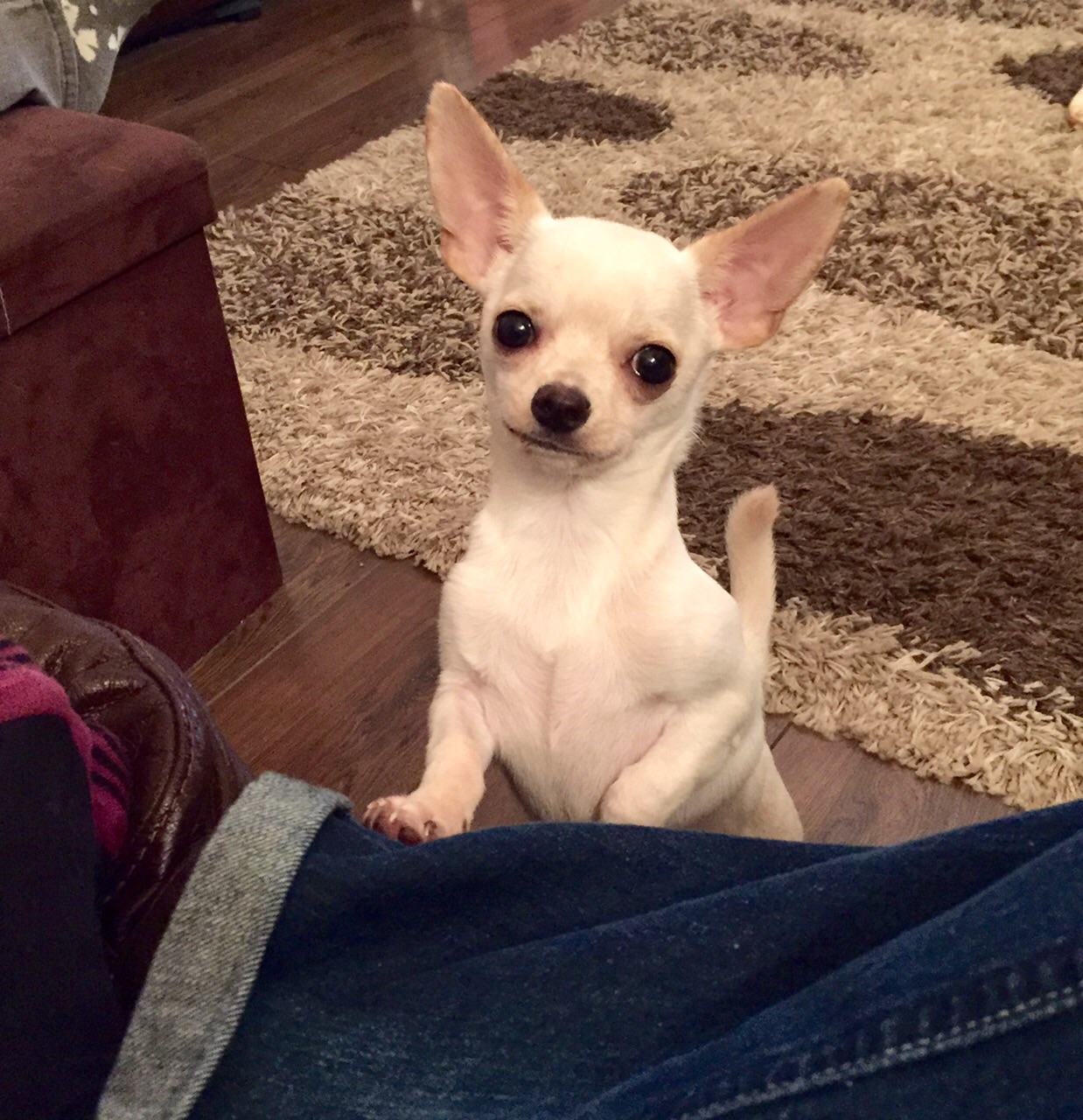 This is Bob, the cat. He's a dick. When he's done letting you pet him, he lets you know by biting you. He's 17 years old, so we let him continue to be around, but nobody trusts him. In his defense, he did bring me a dead lizard the other day, so there is that.

originally posted by: pheonix358
Here he is! 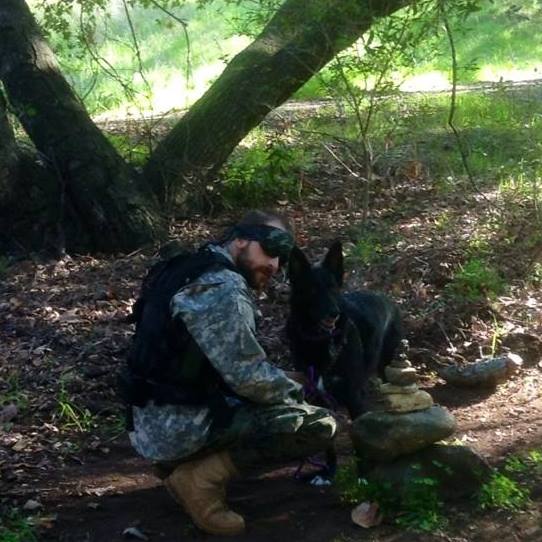 Addie here was originally a rescue from an abusive owner who threatened to shoot her ( for god knows what... most well-behaved dog I've ever owned ). My girlfriend and I didn't think we were going to get her - the folks we got her from had found her a home by the time we called - so my girlfriend went and found a cat to rescue; who himself originated in Afghanistan ( a story for another thread ). Within 24 hours, the lady with ol' Addie here called us back and said that her placement wasn't going to work out. Long story short; we said 'bring her by' and very shortly thereafter 'we'll take her'. Haven't had a single regret.

Only barks when there's legitimately something to bark at, took us weeks to CONVINCE her to come sit next to us on the couch, and aside from a couple of incidents with a trash-can; we've never had a problem. We got super-lucky picking up a 5 & 1/2 year old dog; but it just goes to show that rescues are often just as good a selection as a puppy, if you ask me ( or more-so my girlfriend lol ).

I'd love to get myself a malamute-wolf from a pup; but don't have the space or income at the moment to feed something of that size.

posted on Feb, 3 2015 @ 03:45 PM
link
Great pets here, all! It's so interesting to read about their quirks and back stories. Our Joe is a rescued Rhodesian Ridegeback-Akita-Golden Lab-Dalmation-Beagle-Yorkie, or so his DNA test says. 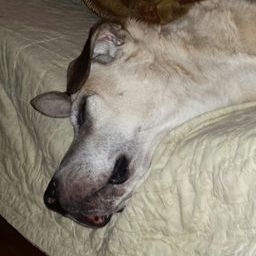