Did NASA just admit they never put Man on The Moon? [Video]

It's a good article that also supports the points that we've been making about shielding and effects on the systems. I get the impression that the OP is not for changing and I'm sneaking out of the thread.

'Disbursing*' the VABs is one heck of a grand 'wow' plan. I hadn't realised such a program would even be possible.

In the last paragraph of your post, you link to a 6.2 MB .pdf file that is a detailed report from a Design Panel that investigated the failure of a pressure vessel on the Apollo 13 spacecraft. As the report is 102 pages long, could you please advise which page contains the measurement data for the "Apollo walls" that you have stated? (ie, "0.015 to 0.025 inches thick aluminum".)

scroll up a bit to page D-13 and find this heading:

STRUCTURAL EVALUATION OF THE OXYGEN TANK

the oxygen tanks wall is NOT the command modules wall..

I don't have time to reference the whole NASA document to you, but the above quote should cover it pretty elegantly. In addition you had the welds that made some difference, but as you see I'm spot on when it came to the thickness of the Apollo outer shell walls.

In the last paragraph of your post, you link to a 6.2 MB .pdf file that is a detailed report from a Design Panel that investigated the failure of a pressure vessel on the Apollo 13 spacecraft. As the report is 102 pages long, could you please advise which page contains the measurement data for the "Apollo walls" that you have stated? (ie, "0.015 to 0.025 inches thick aluminum".)

scroll up a bit to page D-13 and find this heading:

STRUCTURAL EVALUATION OF THE OXYGEN TANK

the oxygen tanks wall is NOT the command modules wall..

yes and it is talking about the outer shell of the oxygen tank..

am i mistaken in thinking you want this to be the outer shell wall thickness of the command module??

the word "command module" is mentioned only 3 times in the entire document.. and not once is it a heading..


Needless to say this is a very Simplistic Statement. Yes, there is deadly radiation in the Van Allen belts, but the nature of that radiation was known to the Apollo engineers and they were able to make suitable preparations. The principle danger of the Van Allen belts is high-energy protons, which are not that difficult to shield against. And the Apollo navigators plotted a course through the thinnest parts of the belts and arranged for the spacecraft to pass through them quickly, limiting the exposure!!!

Pretty cut and dry to me....
Try not to read into things and take them as they were meant...

Now I see where the confusion lies. You see, if you scroll back up to page 20 of that document, you'll find the "Oxygen pressure vessel schematic". The discussion about the vessel's construction then follows.

Also, on page 11 of the same document (which is about the failure of an oxygen pressure vessel on the Apollo 13 mission) it says: 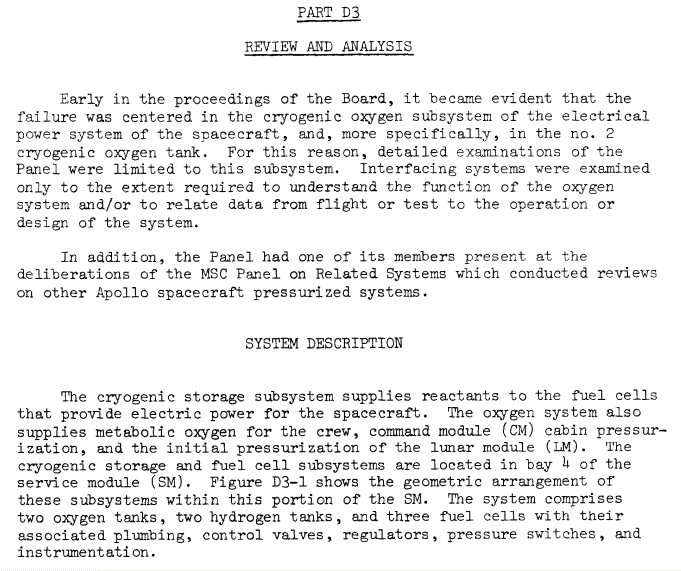 This point is very relevant here:


The cryogenic storage and fuel cell subsystems are located in bay 4 of the service module (SM).

The SM is the Service Module. The astronauts were in the Command Module (CM). In fact, the SM was not accessible to them during the journey. They spent their time either in the CM, or later, when things became critical, in the LM (as a "lifeboat") for a time, transferring back to the CM for the re-entry procedure after the other sections of the craft had been jettisoned.

So, I don't know why you referenced the thickness of a pressure vessel within the SM (where the astronauts never were) in order to support your assertion that the shielding of the CM spacecraft was inadequate.

Uhm, no. It's been high security because of all the classified aircraft that test there.

originally posted by: Zaphod58
a reply to: GrandCourtJester

Uhm, no. It's been high security because of all the classified aircraft that test there.

of course that's the cover story.

Uh huh. And yet, none of the terrain around there matches up to what was seen on the moon.

originally posted by: Zaphod58
a reply to: GrandCourtJester

Uh huh. And yet, none of the terrain around there matches up to what was seen on the moon.

And the huge hangars are for aircrafts and they are not movie sets, right?

Ian Flemmings told us in his 1971 "Diamons are Forever" 007 movie about it all being a hoax and filmed on a movie set somewhere in the desert - sounds like Area 51 to me.

Apollo spacecrafts only had a heat shield for rentering the Earths atmosphere which had absolutely no effect when it came to radiation protection for the Apollo crew or computer systems.

More specifically an ablative heat shield that consists of a layer of plastic resin; the outer surface of which is heated to a gas which carries the heat away by convection. Such shields were used on the Mercury, Gemini and Apollo spacecraft.

They used a combination of speed, low exposure, and the insulation of the Command Module. It was not ideal, but it was enough. We would not try the same today, and would use polyethylene or something like it. Definitely not lead haha, wow whoever came up with that 6 feet of lead is a funny guy.

Polyethylene is radiation shielding? Really? You want to go with that? Oh and just how did they "use low exposure"? What does that even mean? (I assume you want us to believe they just zipped past the VAs at hyper speed)

an invisible shield some 7,200 miles above Earth that blocks so-called "killer electrons," which whip around the planet at near-light speed and have been known to threaten astronauts, fry satellites and degrade space systems during intense solar storms......The latest mystery revolves around an "extremely sharp" boundary at the inner edge of the outer belt

Actually, it looks as if something was faked ....with the photos from the moon
Not necessarily all of them....but one was fed to the public with rocks and a hillside that perfectly match a different area from the day prior....an hour distant, by the official report. Just turns the trend about 50%, the trend of believabilty.

Yes, they are. They're not going to waste money building huge hangars to fake a moon landing, and then let them sit there. There were better places they could do it, and there are far too many aircraft known to have flown out of Area 51 for them to tie up space there to film a faked moon landing.

Electrons are fairly easy to shield against. Even the aluminum structure of Apollo will stop them. It's the heavier particles that you have to shield against that are the problem. As for the astronauts, just like with all other radiation, short exposures aren't going to hurt them. It's staying for months at a time that is the problem, which is the next step for the moon.
edit on 11/29/2014 by Zaphod58 because: (no reason given)

I referenced the wrong document, sorry. Finding an undeniable source for the thickness of the chem-milled aluminum skin that wrapped the honeycomb that was used around the Apollo Command Module was not easy, but here we go:

A cutaway view of ths Apollo Service Module
is shown in Fig. 3. The shell is composed
of 1-in. thick honeycomb panels. Six radial
beams extend inward from the shell to take
shear loads. These beams are a web-stringer
design made from chem-milled aluminum. The
web thickness is 0.018 in. The beams divide
the Service Module into six sectors, four containing
fuel tanks and two containing equipment
shelves. Equipment is also located on forward
and aft bulkheads.

The crew compartment was cylindrical in section in a welded and riveted construction, 92 inches in diameter and 42 inches deep, giving a habitable volume of 160 cubic feet, just sufficient for the two crewmembers to stand side by side. Due to the weight saving programs the compartment skin was reduced to a thickness of 0.012 inches, the equivalent of approximately three layers of kitchen foil. The crew were restrained in a standing position by spring loaded straps to the side of the compartment and its floor.

originally posted by: Zaphod58
a reply to: MerkabaMeditation

The NASA Engineer in my OP says it's a challenge that must be solved before we send people through the Vann Allen Belt, he is working on it today and he seem to think that it is a problem.


It must really burn you Moon Hoax Deniers that have said for years that the Vann Allen Belts radiation poses little or no challenge to spacecrafts & astronauts, and now in 2014 - 55 years after the first Moon Orbiter and 45 years after the first manned Moon missions - a NASA Engineer working on the next manned mission to Mars contradicts you. Perhaps you all should become a bit more humble now?

It's been explained repeatedly to you. Notice where they're planning on going? MARS. That requires a different trajectory than the moon.

The Van Allen Belt is not uniform, and it doesn't completely cover the entire earth. That means that there are portions that can be easier to get through, and portions that are harder to get through. During Apollo it wasn't a problem, because the trajectory used allowed an "up and over" approach, and they were only in space a short time. The next missions will involve long term stays, which are much harder to do, and require new technology.

originally posted by: JustMike
So, I don't know why you referenced the thickness of a pressure vessel within the SM (where the astronauts never were) in order to support your assertion that the shielding of the CM spacecraft was inadequate.


Yes you do, we all know why simple things are misrepresented and twisted to fit ridiculous claims. It's difficult to fabricate your own reality based on real facts, that wouldn't be very fun now would it?