none of that matters. dont you know that answer?
all that matter is wilson is white and brown was brown.

thats what people that claim racism keep going back to.

never mind the officer has a perfect record. never mind brown went for the gun.
never mind the grand jury went through ALL the facts and evidence and ruled the shooting as just.

none of that makes a difference.

peoples minds were made up the moment it happened

wilsons big snafu was being a white dude.

if he was black, nobody would be crying foul at all.
i know it. you know it. all the race baiters know it too

Wait, so a police officer doing his job and responding to a situation is suddenly a racist murderer? Why does it always have to be race driven with some people?


Less then lethal force was also part of his training.


At what point should he have used less than lethal force?

Waiting for someone to pipe up and say "kill black people".

originally posted by: Domo1
a reply to: Grovit

Waiting for someone to pipe up and say "kill black people".

yeah, i edited it

we have seen it over and over again

who needs facts and evidence?

Sorry, but if I am in a scuffle with a criminal, and they went for a gun, I would act with deadly force before I end up being the dead one. I don't care about skin color one bit. Just because of the fact that the officer was white, and the criminal was black, this is suddenly a hate crime? Can we look at this logically before jumping to the conclusion that it was blatant racism? Would you be saying the same thing if it were a black officer?

Sorry, but if I am in a scuffle with a criminal, and they went for a gun, I would act with deadly force before I end up being the dead one. I don't care about skin color one bit. Just because of the fact that the officer was white, and the criminal was black, this is suddenly a hate crime? Can we look at this logically before jumping to the conclusion that it was blatant racism? Would you be saying the same thing if it were a black officer?


If Wilson was black this wouldn't have even made the news.

I don't trust this guy's story at all!

Let's take a breath and recap. Wilson sees two young black men walking in the middle of the street. He pulls over and politely asks them to use the sidewalk. They refuse. He asks again, still polite. Brown tells Wilson — again, a uniformed police officer in a police car — "# what you have to say." Wilson stops his car, tries to get out, and Brown slams the car door on him and then begins punching him through the open window.

What happens next is the most unbelievable moment in the narrative. And so it's probably best that I just quote Wilson's account at length on it.

I was doing the, just scrambling, trying to get his arms out of my face and him from grabbing me and everything else. He turned to his...if he's at my vehicle, he turned to his left and handed the first subject. He said, "here, take these." He was holding a pack of — several packs of cigarillos which was just, what was stolen from the Market Store was several packs of cigarillos. He said, "here, hold these" and when he did that I grabbed his right arm trying just to control something at that point. Um, as I was holding it, and he came around, he came around with his arm extended, fist made, and went like that straight at my face with his...a full swing from his left hand.

His story sounds so contrived. It makes no sense to me.

Exactly. I am just so sick of people jumping to the conclusion that it is always racism.

I don't know about anyone else, but if your previous job was DISBANDED due to racism, it wouldn't look good on your resume and would only look 'perfect' for retarded racists.

Whites are victims of racism too. If whites go into certain neighborhoods they're beaten, robbed and maybe worse. And it wouldn't be considered a hate crime.

Goes both ways and that's why racism is such a useful tactic when it comes to dividing people to prevent them from uniting.

I don't know about anyone else, but if your previous job was DISBANDED due to racism, it wouldn't look good on your resume and would only look 'perfect' for retarded racists.

So if you work for a company that is guilty of dishonest practices, that makes you dishonest by association?

posted on Nov, 25 2014 @ 05:20 PM
link
it is clear now that wilson was chasing brown and firing at his back. after 5 or six rounds while in pursuit brown stopped then six more rounds are fired. one key witness is currently missing and unable to testify. other witnesses claim that brown was going down when the last bullets were fired. others say he was charging the officer. the only life threating round was fired and killed him instantly but entered brown at a downward angle into his forehead. the height difference in the two does not allow for that angle of entry unless brown is on his knees. givin all that it would have been correct to indict wilson.

the media hid the fact that there was a 90 second or so pursuit and led the public to believe that it all happened near the officers vehicle. it is not police procedure to chase a suspect alone when backup is on the way and you have sustained injuries. clearly this was an adrinaline fueled revenge shooting that if following procedures the suspect could have been caught later with back up. the witnesses that say brown was charging did not come foward until days later when others went missing.

Supposedly Darren Wilson was punched? Have you seen the pictures of his injuries? Looks like no fist-to-face injury i have ever seen or experienced. Fists leave bruises and broken bones, not little rosy cheeks. 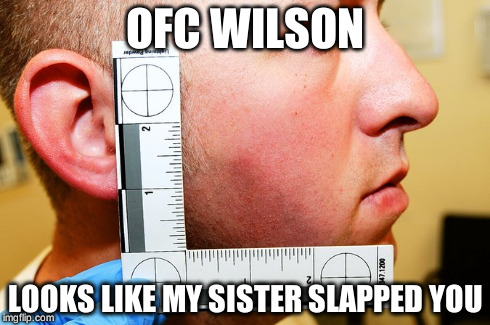 Cops need to know when is and when it isn't apporopriate to use a firearm. That should always be the last resort. Why cary a tazer or pepper spray if your going to reach for the gun? Why not use a less lethal means first?

Wilson's story doesn't hold water. Sounds pretty shady considering he killed an unarmed man. Now he comes out after the GJ secision and says he would do it again? Totally inflamatory, and in no way going to help ease tensions back in ferguson.

Well, you are sitting there in your cruiser doing your job and this POS thug that weighs 300 lbs. and stands 6'4" reaches in and slaps at you and attempts to take your gun.

Yeah. He may be unarmed at that moment, but he doesn't intend to be for long. At that size and with his thug mentality, he WILL take your firearm and then YOU will be the one unarmed.

Some people absolutely cannot think beyond their noses, or they are men of the metrosexual persuasion and think talking sweetly to the "young" man will do the trick.

posted on Nov, 25 2014 @ 05:26 PM
link
As tragic as this incident certainly is, I'm still unclear why an officer who had never previously fired a shot in the line of duty would suddenly decide to shoot a black chap for no reason.

I think it's obvious that Mike Brown should be alive today, but something spooked the cop. A horrific misunderstanding of intentions between the two men, I imagine.

I see no reason at all to believe the cop was spooked because of racism though.