page: 1
31
log in
join
share:
MKMoniker
+10 more
posted on Nov, 11 2014 @ 09:22 AM
link
Excavating Medieval castles in the UK must be a fascinating job. But rarely do you find a literal treasure of artifacts like they are unearthing at Rathfarnham:

That live science link listed jewelry, heels and lip rouge among the broken plates. Did women in their time live in the basement?

Too bad there is no picture of the shoes, I was really looking forward to seeing the heels.

Yes, I was disappointed the high-heels weren't shown too. But the article said that leather shoes require extra preservation efforts, so the public probably won't see them on display for a few years.

I was fascinated by the tidbit that there weren't left or right shoes in those day.

Thanks! I love that period in UK history too.

www.irishtimes.com...
17th CENTURY "PARTY HOUSE" ARTIFACTS FOUND AT RATHFARNHAM CASTLE
"A near perfect hoard of 17th century artefacts has been discovered in an underground lair of Rathfarnham Castle, revealing intimate details of the lives of the family who lived there and wider Irish society during that period.

"The hoard was discovered about a month ago by construction workers installing a lift shaft at the castle. It was found in a sealed lair between two stone floors at the bottom of one of the castle towers. Among the items discovered was a foldable toothbrush, clay pipes, jewellery, porcelain, coins, chamber pots, crystal goblets, as well as wine bottles and ointment jars with as of yet unknown liquids inside.

"The hoard paints Rathfarnham Castle as a “party house” and those who lived there as an “elite, wealthy, and extremely fashionable” family, said Ms MacGowan. “The castle wasn’t their primary residence. They would have done all their entertaining and partying here.”

"It has been said Oliver Cromwell and his men held council at Rathfarnham Castle as they besieged Ireland, and the discovery of a Cromwellian armour breastplate with a musket-hole through it “ties in with that”, said Ms MacGowan."

Sorry, not meaning to offend. Seems there were a lot of women's accessories "in the pit". Scroll down the link of photos I provided. I was just thinking along the line of women's rights back then. As in less than today. 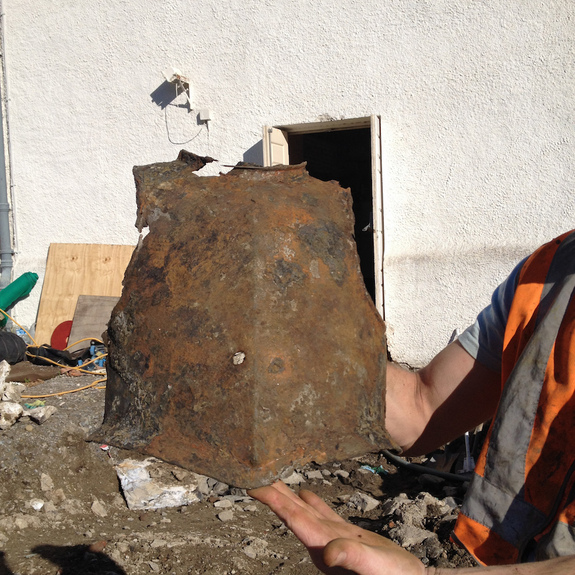 
Perhaps the womenfolk used the front of the pit as a storeroom for spare supplies, but those things that rolled back into the depths became irretrievable. Then they seal that gap up because it wasn't any use.

"I was just thinking along the line of women's rights back then. As in less than today."

Then as now, wealthy/aristocratic/royal women can do whatever they want, within limits. They may not have had many "rights" like owning property or businesses in Medieval times. But if they were married to the castle owner, their most important "job" was producing male heirs and trying to help them grow healthily into adulthood. These legal children were these women's real "power," and history is littered with discarded rich wives and their sons plotting against a wealthy/powerful patriarch.

This particular castle was also the family's "party house", so all the "women's accessories" found indicates that the women in this castle could "party-hardy" along with the men.

www.rathfarnham.com...
RATHFARNHAM CASTLE ORIGINALLY BUILT FOR PROTECTION AND ESCAPE
"Rathfarnham Castle was one of a chain of castles built to protect Dublin from attack by Irish clans based in Wicklow in the 16th century.

"The discovery of secret tunnels beneath the foundations created great excitement in 1987. Designed to protect the family and soldiers from attack, they have since been closed off. One tunnel lead from the Castle to an exit at the present Castle Golf Club and another tunnel lead to the Protestant church in the village.

"The skeletal remains of a young woman were discovered in one of the hollow walls on the middle floor in 1880. It is believed that the remains were there for over 130 years. Folklore tells us that a young fair maiden was locked into a secret compartment during one of the famous balls at the Castle.

"Two suitors were arguing over her love and they decided to sort out their differences by way of a duel. The successor would then rescue the fair maiden from the wall. But as it happened, both died - one from drowning and the other from his wounds. The whole affair was conducted in secret so the beautiful maiden was left there entombed in the wall, where she died."

Without a skirt (surrounding) wall, it almost looks like a cross between a castle and manor house. And on the map, it's easy to see why this castle's early inhabitants were tied to the British court, since Rathfarnham was literally across the water from Liverpool.

www.heritageireland.ie...
"THE BERKELEY COSTUME AND TOY COLLECTION" AT RATHFARNHAM CASTLE

Astounding... But if the two suitors kept it secret, how are we hearing this story now and how are we sure it was that maid from the story?

I'm not really questioning the story, but its a very interesting story that caught my attention, and so I'd love to hear about this small detail. If someone knew about the arrangement to be able to pass down the story to us, why didn't they save the girl?

I guess its just folklore so no one really knows I did find a ghost story related to the woman. Apparently, after the body was found, the poor woman's blue dress was repurposed into couch cushions, at the orders of the lady of the house.


It was in the 17th Century. Not trying to start an argument but lets be realistic about it, eh?

Lets be realistic about what?


Unfortunately for us, the Irish, we were part of the UK until 1922.

check this link and get your facts right
edit on 14/11/14 by SecretKnowledge because: added link for educational purposes

PM'd as i don't want to derail thread......but you are correct as i should have been far more specific.

As to the thread in general, when i was younger these types of discoveries didn't really excite me. As i've got older though i have realised it is actually these kinds of discovery that tell us most about life at the time (for the normal folk, at least).

"Astounding... But if the two suitors kept it secret, how are we hearing this story now and how are we sure it was that maid from the story? "

Here is the story in more detail:

countryyankee.wordpress.com...
HAUNTED HISTORY - RATHFARNHAM CASTLE
According to this, she was entombed in the wall in a ball gown - with her hands tied. I suspect the "dueling boyfriends" was just a cover story, and/or only partially told. I've never heard of tying up and entombing someone by people who both (potentially) love her.

Entombing someone inside a stone wall is more a murderous act of rage/revenge. Was one of the boyfriends actually a husband, who caught her - during the ball - in bed with the other man? Did she get tipsy and tell a married aristocrat at the ball that she was pregnant with his child? Did she threaten to unleash "secrets" of that wealthy family, who jealously guarded their reputation and social standing? Was she only invited to that ball for this murderous plot to unfold? (I don't see how the hole in the wall - with stones and mortar waiting - just "happened" to be ready when she showed up for a ball.)

In the UK/Ireland, his type of death (immurement) would appeal to people of the top social classes, since a troublesome person simply disappears, and they can then throw off suspicion while speculating with everyone else on where she went, where relatives live, running off with a strange new boyfriend, etc. As a Crime of Passion, it would appeal to spurned lovers/spouses relishing a slow death of starvation as revenge for her adultry.

Given that this castle was also home to men who were involved in the debauchery of the Hellfire Club - including Philip Wharton, the Rake of Rathfarnham - there were probably plenty of men around that time who could be suspects. (Briefly described in the Yahoo article in my OP, here is a more detailed article

www.patrickcomerford.com...
RAKE OF RATHFARNHAM CASTLE - PHILIP WHARTON
"Philip was once a house guest of the Duke of Lyria in Madrid, who described Philip as having “neither faith, principles, honour, or religion – lied in every word, was cowardly, indiscreet, and a drunkard, possessed of all the vices. His only good quality being an admirable fawning toady.”

I'm a Brit living in Ireland for the past 3 years and have to agree that Ireland is NOT part of the UK currently......