WASHINGTON (Reuters): Lockheed Martin Corp said on Wednesday it had made a technological breakthrough in developing a power source based on nuclear fusion, and the first reactors, small enough to fit on the back of a truck, could be ready for use in a decade.

Tom McGuire, who heads the project, said he and a small team had been working on fusion energy at Lockheed's secretive Skunk Works for about four years, but were now going public to find potential partners in industry and government for their work.

If this pans out, this could be HUGE news, a literal game changer for humanity. Nuclear fission is dirty, dangerous and cumbersome. Nuclear fusion could solve our numerous energy problems, lift the world out of poverty, and open the way to reasonable space travel.

This is not some crank with a free energy device. This is coming from Lockheed Martin's Skunk Works, reported by multiple credible mainstream media sources.

This Aviation Week exclusive goes into much, much greater technical detail and talks to the scientists.

Hidden away in the secret depths of the Skunk Works, a Lockheed Martin research team has been working quietly on a nuclear energy concept they believe has the potential to meet, if not eventually decrease, the world’s insatiable demand for power. 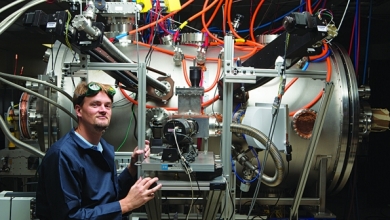 Thomas McGuire, principal investigator of the Skunk Works nuclear fusion experiment dubbed T4, with the project’s stainless steel containment vessel that is roughly the size of a business-jet engine.


At Lockheed Martin Skunk Works®, we’re making advancements in the development of fusion energy, the ultimate form of renewable power. Our scientists and engineers are looking at the biggest natural fusion reactor for inspiration – the sun. By containing the power of the sun in a small magnetic bottle, we are on the fast track to developing compact fusion reactors to serve the world’s ever-growing energy needs. Watch the video to discover more.

No carbon emissions. The only by-products of fusion reactions are small amounts of helium, which is an inert gas that will not add to atmospheric pollution.

Abundant fuels. Deuterium can be extracted from water and tritium is produced from lithium, which is found in the earth's crust. Fuel supplies will therefore last for millions of years.

Energy efficiency. One kilogram of fusion fuel can provide the same amount of energy as 10 million kilograms of fossil fuel.

No long-lived radioactive waste. Only plant components become radioactive and these will be safe to recycle or dispose of conventionally within 100 years.

Safety. The small amounts of fuel used in fusion devices (about the weight of a postage stamp at any one time) means that a large-scale nuclear accident is not possible.

Reliable power. Fusion power plants should provide a baseload supply of large amounts of electricity, at costs that are estimated to be broadly similar to other energy sources.


What a fantastic technology.
edit on 15-10-2014 by cyberheater because: (no reason given)

Well today is the day for great News on energy.

In another thread there was talk about Helium 3 on the moon finally being taken serious enough to develop. Now this. Over the years there have many similar stories posted only to have them fade out of the public eye to never be heard of again.

Yes, if they get it working it will have all kinds of applications and benefits.It is really hard to understate how much safer, cleaner and efficient nuclear fusion is compared to nuclear fission. Not the least of which is the radioactive waste it produces lasts only 100 years, instead of almost forever like fission wastes.

The Aviation Week article has a great profile of the team of young scientists who did this here.

originally posted by: SLAYER69
...Let's hope this time something tangible for the publics greater good will be brought out instead of squirreled away into some black budget defense department lab for further 'Research'

It's been in the black budget, they started hinting about it last year and earlier this year, but now they want to take it out and partner up with other people in industry and government to make this a mainstream, commercial technology. From the Aviation Week article:

With just such a “Holy Grail” breakthrough seemingly within its grasp, and to help achieve a potentially paradigm-shifting development in global energy, Lockheed has made public its project with the aim of attracting partners, resources and additional researchers.

VERY loud when it comes to Rossi and his teams E-Cat device (which is much further along than LM's device at a decade away at least).

But when LM says it's possible, i suppose it's that little bit harder to rubbish the technology concepts isn't it.

NOW we know it IS in fact possible, as confirmed by LM in this release, it only adds to the E-Cat's authenticity...perhaps now we'll begin to talk about what can be done with these LENR devices and where they will take our species in the near future instead of concentrating on debunking for the sake of it.


Which was forced to the surface due to the knowledge of the other of these two stories breaking?

Was it simply a planned release of these two and some possible others soon to be exposed? If so, for what purpose?

originally posted by: ChefSlug
The best news of the year by far.

We already have the trucks, it just depends on how we generate the electricity that powers them.

I have a fission powered eBike.

When we think of nuclear power, there are usually just two options: fission and fusion. Fission, which creates huge amounts of heat by splitting larger atoms into smaller atoms, is what currently powers every nuclear reactor on Earth. Fusion is the opposite, creating vast amounts of energy by fusing atoms of hydrogen together, but we’re still many years away from large-scale, commercial fusion reactors. (See: 500MW from half a gram of hydrogen: The hunt for fusion power heats up.)

LENR is absolutely nothing like either fission or fusion. Where fission and fusion are underpinned by strong nuclear force, LENR harnesses power from weak nuclear force — but capturing this energy is difficult.

So the Lockheed announcement is not about cold fusion or LENR, but about nuclear fusion.

The Russians have experience with nuclear power and they have produced a number of leading physicists and mathematicians. They should be able to adapt to a post-petroleum world, which will be many decades away, anyway.

The OPEC countries invest almost nothing in math and science and are so extremely dependent on fossil fuels that I would expect them to be far more worried about this news.

I'll believe the E-Cat works when there's an ACTUAL independent test, and not one that Rossi puts his mitts all over.

I'll believe the E-Cat works when there's an ACTUAL independent test, and not one that Rossi puts his mitts all over.

But you'll believe the 'breakthrough' by LM without such independent testing i presume?

Thanks for the link to your thread, i missed that one.

Scaled up (really scaled up) this nano tech generator has real promise.

That's an interesting technology because it replaces natural gas with solar for hydrogen production, but if it's only produced at a nano-scale currently, it will probably be a long time before it can scale up. Even then, hydrogen is usually considered an energy carrier, not a source of energy, and would require an entirely new energy infrastructure. Fusion power plants can be plugged into the existing grid.

I don't think the two announcements are directly related, except that in the future we will be using a variety of different energy sources to replace current wasteful, polluting, limited natural resources (oil, gas, coal) with cleaner, cheaper, safer sources (solar, fusion, geothermal), many of which are still being developed or are just in their infancy.

posted on Oct, 15 2014 @ 10:55 AM
link
A fusion powered car would really be something. This could end our dependence on fossil fuels and be the next stage of energy production. If it can really pan out and end up being something significant this is incredible news. Possible history in the making.

This is great. This makes me proud to be human.

This is everyone's moment though. Nice.

Think outside the box.


Self contained supply at the Nano level.....

Nano-Micro machines with their own built in supply. No batteries to recharge or run dry etc.

A fuel cell combines hydrogen and oxygen to produce electricity, heat, and water. Fuel cells are often compared to batteries. Both convert the energy produced by a chemical reaction into usable electric power. However, the fuel cell will produce electricity as long as fuel (hydrogen) is supplied, never losing its charge