Entire Leadership of ISIS Opposition Wiped Out by 'Unexplained' Explosion

posted on Sep, 12 2014 @ 07:00 PM
link
Perhaps these guys were working on some sort of weapon/bomb and it literally blew up in their faces?

originally posted by: sheepslayer247
Perhaps these guys were working on some sort of weapon/bomb and it literally blew up in their faces?

could happen, I guess

Are you all so narrow minded that you automatically assume the US is involved?

You look like mindless sheep when you just blame America for everything, how about opening your minds to other, more likely possibilities?

For example, ISIS alone, without any outside influence, could and would do this.

How about Assad? These guys had united in their fight against him, what better way to disrupt the rebels?

posted on Sep, 12 2014 @ 07:09 PM
link
I believe there was something about a US drone strike a few days ago. Thats what is being said elsewhere online. I can just see what this war on ISIL might become.

originally posted by: Stormdancer777
a reply to: eisegesis

seriously, what are the chances this happens at this moment in time, really odd 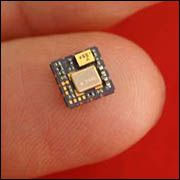 Everything just keeps getting smaller. A New Zealand company called Rakon has developed what they say is the world’s smallest GPS chip. Tinier than your pinkie nail, it could be integrated into pretty much anything someone might want to track. Imagine all the pen thieves in the world finally being held accountable for their petty larceny.


Throw one of these in any of ISIS's gift baskets they get from Uncle Sam. An army is powerless without their munitions, especially these boneheads. It would be the simplest way to keep track of them without actually embedding the chip on them directly.
edit on 12-9-2014 by eisegesis because: (no reason given)

not the US necessarily, some in positions of power however
Someone wanting to throw a monkey-wrench in the whole operation

Well the top candidates are car bomb and gas attack, depending on who is saying it..

The Islamic Front says it was a car bomb and have apparently made a statement saying this.

And then there's this..

Some observers have described Tuesday's incident as a gas attack. Abu Baraa, a rebel figure from a group allied with Ahrar al-Sham, said a doctor who examined the bodies said there was little visible sign of external injuries.

The doctor saw bodies with frothing at the mouth and fluid coming from the eyes and noses, Abu Baraa said, adding the group had been meeting in a heavily fortified underground bunker.

"This was a highly sophisticated attack in a location that was very secure," he said. Photos posted on social media claiming to show the victims of the attack displayed bodies that did not appear to have significant external injuries.

Other reports suggested the victims had died from smoke inhalation. It was not possible to independently verify any of the reports or pictures or the cause of the deaths.

The Hague-based Organisation for the Prohibition of Chemical Weapons (OPCW) said in a statement on Wednesday it had found "compelling evidence" that chlorine gas was used "systematically and repeatedly" as a weapon in northern Syria this year.

President Bashar al-Assad agreed to hand over his chemical weapons stocks for destruction as part of a deal that averted threatened U.S. military strikes, but the continued attacks have led to accusations he had not fully declared his arsenal.

Makes perfect sense. Obama addresses the public about plans to jam ISIS operations with targeted airstrikes, and more then likely the use of mercenaries on the ground. Mercenaries are harder to keep track of, and allows the US to have people 'feet dry' in the area, without sending in actual US troops.

So how do we recieve a welcome wagon in Syria? Well now there is no opposition to ISIS represented in there.... Enter the US. This is textbook spook operations.

First, temporarily align yourself with ISIS. Arm them, train them, fund them (sound familiar?). Next, abandon them publicly. Next, wait for a predetermined amount of time so that the majority of the frightened public forgets we were involved initially. Finally, roll out your plan to destroy ISIS with extreme prejudice.

Now that there is less opposition in Syria, the US can hail itself as the champions. People in the region who sympathized with ISIS opposition will be more willing to sympathize with the US campaign. Also, citizens of the US who support a war footing will espouse the great urgency to attack ISIS in Syria now that there is no opposition to them there.

Add all this together and you have the perfect storm of covert action preceeding mass military action. Israel and the US have done this for decades. The soviets specialiazed in programs like this too. Military deceit is a useful tool when a nations goals are at odds with what the people want. This started primarily in vietnam, and has been put to use in probably every military action since. Show them the left hand so that no one knows what the right hand is doing.

These tactics are far from new. The German Nazi Party was in it's formulative stages and seeking more support for a war against communism in 1933. All they needed was something to spark the public's sympathy to that cause. BAM, Reichstag burns down. The blame was placed on a communist named Marinus van der Lubbe, but looking back at history it's pretty clear this was a Nazi false flag used to garnish support for a war footing.

War is a shadowey business. It's easy to fall prey to the propaganda. The real truths may never come to light.

complicated, whose side are we on now?

That is one hell of a story.

This could be all ISIS needs to spread unopposed in the middle east.

As for who's side we're on?

The simple answer is the 'moderates', and groups like the Kurds, but in reality it's anyone standing against ISIS...Then there's those that are against ISIS but still sympathetic to Assad... What a mess!

posted on Sep, 12 2014 @ 08:07 PM
link
Wouldn't surprise me if it was Assad or the US in a friendly fire accident. I seen an article today in the daily star, a Lebanese media outlet, reporting that ISIS and rebels in Damascus agreed to a pact of non aggression, this also included the so called moderate rebels.

That actually did cross my mind. It is very probable. I just wish we had more information to go on and investigate this a bit more.

originally posted by: sheepslayer247
Perhaps these guys were working on some sort of weapon/bomb and it literally blew up in their faces?

Humm. I don't think that would be possible. When leaders meet is not normally to build bombs while they are all in one place. You would think they would be smarter than that. I could be wrong, but imo it is unlikely.


edit on 12-9-2014 by ElectricUniverse because: correct and add statement.

originally posted by: AnteBellum
a reply to: ElectricUniverse

What a coincidence!
Well with them gaining more and more control of Syria it will be easier for the US to invade unobstructed now. Less people the US government has to argue with. . .

Very true if you go by the spoken word. The Ahrar-al-Sham brigade wanted nothing to do with the West.

I'm still scratching my head and wondering how it is that suddenly terrorists like Ahrar-al-Sham suddenly became moderates.