Giant Spaceship appear at the Earth's horizon on ISS USTREAM

from the same people that brought us this...

Looks as though we have a channel gunning for Thirdphaseofmoon hoax title on youtube.

And how can we forget this...

Sorry they are far from being credible and close as ever to being hoaxers.
edit on 13-7-2014 by tsurfer2000h because: (no reason given)

Amazing video, thanks for sharing.

Wonder why that ufo was outside of our planet's surface, what it was doing there...

waiting for a possible lift-off Op as a contingency in case the tectonic and cultural madness gets out of hand before the "news" can bebroadcast.

you're gonna find it interesting, although you may not LIKE it.

it is good news.

posted on Jul, 13 2014 @ 08:43 AM
link
There is always the case for a reflection, but it's too hard to tell just what might be reflecting, this is internet video second generation, not at it's best in the first place.
edit on 13-7-2014 by smurfy because: Text.

posted on Jul, 13 2014 @ 09:15 AM
link
Amazing how inept our government is at hiding stuff from us. We always manage to get all of their secrets here on ATS. The government should hire us to get the scoop on the Taliban and Al-Qaida. Nothing gets past the brilliant minds of our members. y reply to: sn0rch

posted on Jul, 13 2014 @ 09:17 AM
link
It almost seems like there is some sort of exhaust floating around in the video. I suppose it could be some sort of gasses being jettisoned from the station. When it hits the cold outside it distorts the picture sort of like vapor does against a dark background. I was so busy trying to figure that out that I couldn't see any spaceship. It drew my attention.

posted on Jul, 13 2014 @ 09:20 AM
link
It does make sense from an intelligent frame of mind. Not everyone will get that unfaitunatly. rly reply to: Aliensun

posted on Jul, 13 2014 @ 09:49 AM
link
Can we please add Secureteam 10 to our hoaxer list, because they have a tendency to push crap like this as actually being real?

They are up there with...

I think it's time for a new addition.

posted on Jul, 13 2014 @ 10:12 AM
link
Before throwing away a potential source of unusual information, has anyone checked the ISS feed or has another source to it and can see if what is being described is legitimate or has been faked?

As for the zooming in part on the you tube video. I am not sure what quality the cameras are on the ISS, but I do expect them to be a lot better than what is played through youtube. If the video was not zoomed in then we would see nothing from the youtube video compression. As for why the UFO is clearer than the surrounding I am not sure. If someone does have some raw footage of the event it would help clear things up.
edit on 13-7-2014 by kwakakev because: added 'youtube'


Before throwing away a potential source of unusual information,

Secureteam 10 has a habit of posting videos such as this and trying to pass it off as real. Take a look at the videos I posted from their youtube channel and you should see why it's in the hoax bin.

It's fake. Let's think about this for a minute.

1. The space ship "appears" almost exactly in the center of where the camera is facing, I'm sorry but when considering the rarity of UFO's getting caught on tape I'd say that's a little too coincidental.

2. The ISS feed is in 1080p high definition, the quality of this video appears to be about 220p, why would the quality be reduced so drastically for this video? I know YouTube supports HD video so that is not the case. Obviously this videos quality was lowered to hide something, probably the fact that the UFO is CGI.

3. The government would have shut down the camera and ended the feed if something of this magnitude were to appear so clearly, well it would have been clear if the video quality wasn't intentionally lowered.

If there is this many inconsistencies I think it is safe to assume this isn't 100% legitimate.

I am not aware of many sources that are 100% right every time or 100% wrong every time. Being able to keep things in context helps.

For the ISS video, I find it interesting in knowing where to look for such a quick event. Maybe they know why the video stream got replayed back, but working within confidentiality arrangements to only use public sources? Is it even possible to determine if this replay of a live feed does happen? Maybe this is a common occurrence with many other strange things just before other replay moment starts? Maybe someone here knows?

For the Syria video, maybe it is a recreation of witness testimony. Flying ships during military encounters is not unusual, have been a few military UFO reports going around with the conflicts. With the way the media has been controlled during more recent conflicts, there could very well be technology in operation that we are not informed about. Kind of looks like an upside down B2 bomber with heaps of Armour and a big knob sticking out going in slow mode.

For the Apollo video, I don't know what to make of it. I know the mission is to stay calm, not always that easy. With so many different stories about the moon I prefer to hear it from the astronauts themselves. Edgar Mitchel would be the one I have heard the most.

The Scary Alien Ships, It does look like a hand held telescope was used with the zooming and tracking of the objects. I have seen other videos where the shapes morph as well, kinda like life in the sea, but different.

This is really the first I have heard of Secureteam 10.


I am not aware of many sources that are 100% right every time or 100% wrong every time. Being able to keep things in context helps.

For the Syria video, maybe it is a recreation of witness testimony.

Witness testimony, there was no witness for this it is a hoax video to get people to subscribe which in turn gets them views and that means money. The more views means the more money you can make .

This is really the first I have heard of Secureteam 10.

Well at least you found out the truth before being sucked in by one of their silly videos.

posted on Jul, 17 2014 @ 02:34 PM
link
You don't really hear too many UFO sighting pertaining to mother ships. It's usually a shiny object with flashing lights jetting across the sky.

This is my story: Me and my neighbor were sitting on the front porch star gazing in a suburb of Houston, Tx circa 1994. It was a clear night, and the stars were very bright for a suburban area of Houston(Usually the stars are dimmed by the city lights). We were facing the southern horizon, with his house behind us looking toward the sky (FYI, neither of us had anything to drink ha ha). Suddenly above our heads a black "void" moved above us slowly toward the south. It was like a giant donut shaped object was blocking the view of the stars. I thought I was seeing things, until my neighbor said "do you see that?" I said "yes what the heck is that?" IT WAS MASSIVE. It took up about 1/3 of the sky. It was like a ship that had a cloaking device or something, because you would never see it if you were not staring directly at the stars like we were. The only way you could tell it was there, was the absence of stars, and the faint corona of light encircling its shape. My neighbor ran inside to grab his wife, and just before he got back it just disappeared. He said "where did it go?" And I said "it's like it just evaporated."

Obviously I don't have photo evidence, and even if I had a camera at the time I don't know if it could have been caught on film due to it being night. I until this day have never heard of any other similar sightings. I created an artist's rendition of what my neighbor and I saw.... 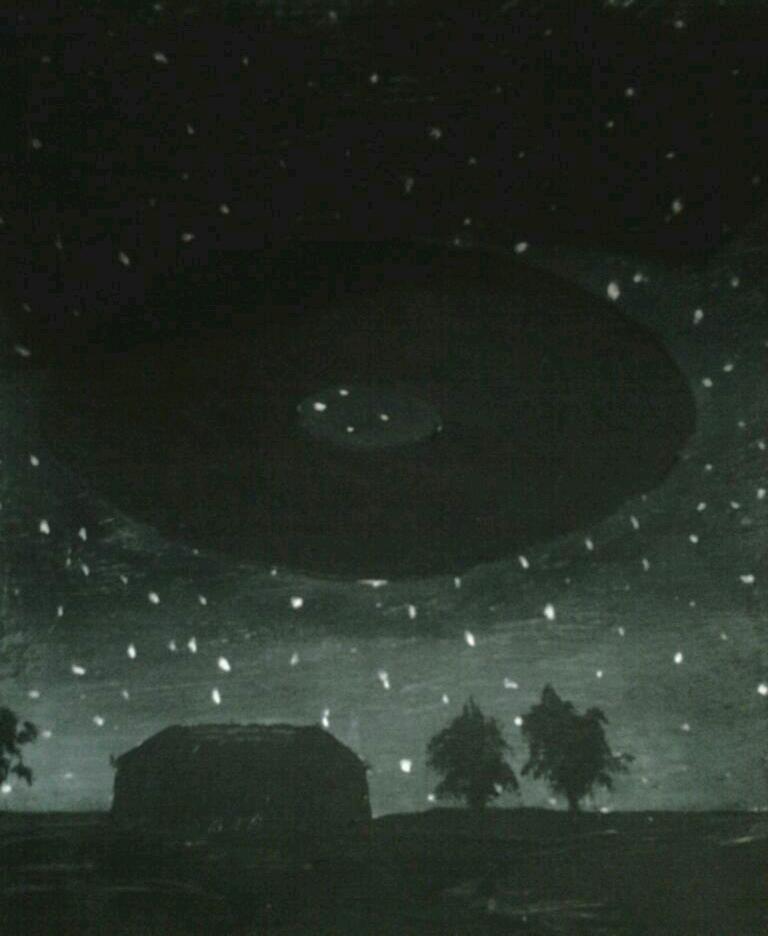