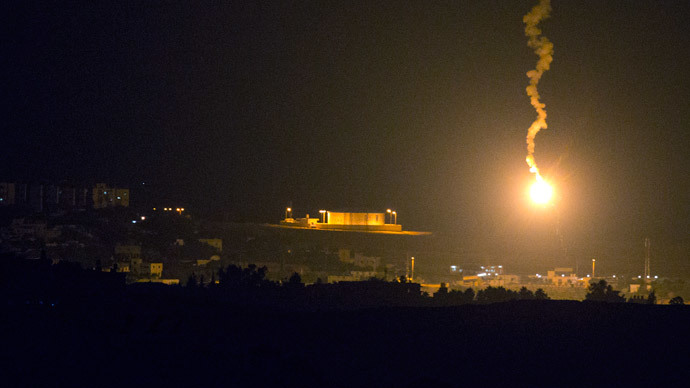 Israel began a major counter-offensive on Gaza early on Tuesday following the launch of over 85 rockets at southern Israel on Monday. At least 14 people have been injured as the Israeli Air Force carried out airstrikes against Hamas targets.

Tweet:
#IDF has commenced Operation Protective Edge in #Gaza against #Hamas, in order to stop the terror #Israel's citizens face on a daily basis

Up to 14 Palestinians have been injured in the airstrikes, Times of Israel reported. Out of all the injured, two were children, a BBC correspondent cited medical sources as saying.

According to Gaza-based journalist Harry Fear at least 16 Israeli raids have targeted Gaza from north to south since the operation began.Fear added that Gaza's Health Ministry has declared an emergency. Hamas said Israel targeted four houses and four training facilities in the Gaza Strip.

The move comes after more than 85 rockets were fired at southern Israel Monday, with at least 16 of them intercepted by the Iron Dome defense batteries.

Boy that escalated quickly, again! Many many lives will be lost in this war, which won't be over soon IMO. Mostly Palestinian lives that is. I'll be posting updates asap.

Haaretz Breaking News
edit on 8-7-2014 by Hellas because: (no reason given) 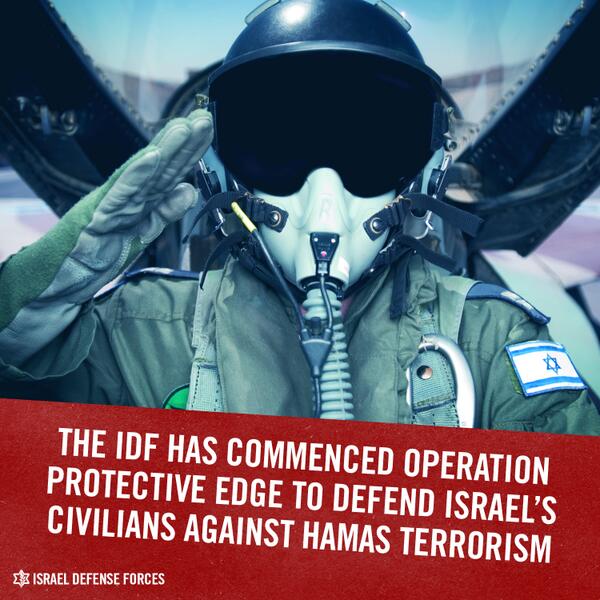 There's talk that Israel is preparing to invade Gaza:

The strikes came after Israeli army sources said troops were being put on notice of "preparation for escalation". The Guardian saw columns of tank and armoured personnel carriers moving along the main highway between Jersualem and Erez, on the Gaza border.

The Israeli foreign minister, Avigdor Lieberman, on Monday formally announced his party was leaving the Netanyahu coalition over the Gaza issue.

But despite this alleged government reluctance, the army has reportedly been ordered to prepare a significant expansion of its operation.

"We are entering into a long operation," a senior IDF source said. "We are only at the start. Patience is required. We are preparing further steps and a gradual expansion of our order of battle."

I fear that if the Israeli-Palestinian crisis escalates, it could signal greater instability in the region, what with ISIS getting around. Let's hope that things settle down soon, but i doubt they will.


There's talk that Israel is preparing to invade Gaza:

posted on Jul, 8 2014 @ 05:41 AM
link
the quicker the west lights the match
the quicker it all burns down
the quicker we can rebuild

I thought that expensive Iron Dome system was supposed to shoot down all these rockets anyway. I wonder too what the infrastructure damage was from this rocket attack? How many homes damaged or destroyed, for example? They always seem to leave all this information out of report, simply saying rockets were fired.

posted on Jul, 8 2014 @ 06:07 AM
link
I was wondering when they were going to take Gaza. Warmongering land-grabbers, who aid themselves with deceit and manipulation through propaganda. This is the 21st century, after all.

a reply to: Britguy
It appears that the Iron Dome has intercepted at least 5 rockets today.
edit on 7 8 2014 by JohnTheSmith because: ETR


Israel launched a series of airstrikes on Gaza militants early on Tuesday, dubbing the offensive "Operation Protective Edge." More than 50 targets were hit in the offensive.

Meanwhile, rocket fire on Israel's south continued. According to the IDF, eight projectiles were launched between 2 and 6 A.M.

Militants in Gaza fired more than 85 rockets toward Israel on Monday evening, with Hamas openly claiming responsibility for some of the launches for the first time since the current round of fighting began. The rockets hit several major cities in the south and, also for the first time in the current fighting, caused alarms to go off in central Israel and Jerusalem. The barrages lightly wounded two Israelis and caused property damage.

The Israel Defense Forces called up 1,500 infantry and Border Police reservists in preparation for further escalation, after the security cabinet decided on Monday afternoon to intensify attacks against Hamas and other terrorist groups in the Gaza Strip. A senior official said the ministers want to refrain from a large-scale military operation for now, but they instructed the army to prepare for significant expansion of its current operations.


Well .. if Hamas would stop firing rockets at Israel, then Israel wouldn't have a reason to shoot back.

Really? Is that sarcasm or a real opinion? Not that I support any sort of violence, but I have a feeling it's a bit more complicated than that to just point your finger at the Palestinians and say it's all their fault and they deserve what they get.


Well if Israel would stop stealing their land, mass arresting their people and forcing people out of their homes so more claim jumpers could move in Hamas wouldn't have a reason to shoot rockets at Israel. Not to mention even if Hamas didn't fire rockets Israel would arrange something themselves so they would have a reason to attack Gaza.
edit on 8-7-2014 by buster2010 because: (no reason given)

That's exactly the point. I don't understand what is so difficult to understand about Hamas being a terrorist organization. If Hamas was sitting on a border next to the US and were launching rockets, into say Texas, they'd be obliterated. If you ask me, the Palestinians would be much better off without Hamas ruling over them.

And if Hamas would stop kidnapping and murdering Israelis, Israel wouldn't need to retaliate. It goes both ways. It's just one big cluster over there.

The only reason why the Palestinians were firing rockets at Israel, was because of the destruction and death Israel left in the West Bank, during the search for those three Israeli teenagers. The rockets were fired by the Palestinians in response to Israel's campaign of collective punishment.

Obviously, as a result of Palestine's reaction, Israel has thought it wise to begin further campaigns against the people.

What i am trying to say, is that Israel is the root cause of these ongoing problems. Both sides were on easy ground earlier in the year. It is only when Israel starts collectively punishing the Palestinians, do they decide they have had enough and fight back.

I for one, hope that both sides come to peaceful negotiations, but it doesn't look to be a realistic goal as of now.

Parrot talk. No substance, same repeated lie.
Let the new generation decide, forget the old, the old don't learn and it's hard headed.
Hope is in the young's heart, not the old cold hearted.

originally posted by: EternalSolace
a reply to: buster2010

And if Hamas would stop kidnapping and murdering Israelis, Israel wouldn't need to retaliate. It goes both ways. It's just one big cluster over there.


Do you have proof that Palestinians did that??? Israel doesn't so how do you know who did it? Also if Israelis whom six have confessed to kidnapping and murdering Palestinians then Hamas wouldn't have a reason to retaliate.

originally posted by: daaskapital
What i am trying to say, is that Israel is the root cause of these ongoing problems.


I respectfully disagree. I think both sides are seriously screwed up. Both sides are to blame. And if you rain down 300 rockets on a country that has bigger firepower than you, you are going to get nailed back and in a big way. Common sense says - don't do it. (common sense - something severely lacking in the middle east). I think Seagull said it best - ATS Thread - There Are No Angels