President Barack Obama has spent more time traveling abroad than other U.S. president in history at this point in their presidencies, according to a forthcoming study from the National Taxpayer Union Foundation (NTUF) provided exclusively to Breitbart News ahead of its public release

All this time traveling and playing golf it is no wonder things are going to crap in America. It seems that Obama is not paying attention to his constituents. While Americans are struggling Obama is living it up on your dime.

Not only that ,but he is doing it on your dime. From the same source.

That is just the cost of air-force one to get him to and from wherever he is going.

I did a Google search on the total amount that the Obama's have spent on vacation, but couldn't find any real results. I did find this little tidbit though


The conservative watchdog group obtained travel records from the U.S. Department of the Air Force that show the Obamas racked up $7.4 million during just three trips in 2013 – in flight expenses only

I wonder just how many vacations Obama has taken, and at what expense to America?

posted on Mar, 24 2014 @ 12:12 AM
link
The best thing he can do is take a permanent vacation at this point. I think a lot of Americans wouldn't mind footing the bill for that particular jaunt.


Lol you got that right. Hell I would even help pay for that. Maybe we could send him back home, or maybe Siberia.
I hear it's nice there this time of year.

posted on Mar, 24 2014 @ 12:18 AM
link
So is this what Conservatives spend their time "exposing" now? Gee, who would have thought? Flying a jet from country to country is expensive!

Or do follow the prez's itinerary so much that you and no one else was protesting all three of these prezs?


Maybe you should stick to the topic at hand, and stop being a liberal troll.

Like that will ever happen a leopard cant change their spots regardless of how ugly they are.


Maybe you should stick to the topic at hand, and stop being a liberal troll.

Like that will ever happen a leopard cant change their spots regardless of how ugly they are.


So let me get this right

You are outraged because Obama has taken 3 more trips than Bush?

This is the mentality that screws us serfs whom buy into a two party system that was devised to create enough division to allow the criminals in DC to put us in the position we are in now!!!!

I do agree with the OP though!

When it comes to the Obama's the phrase "Let them eat cake" is a historical phrase that comes rolling back like a huge ass avalanche.


SH&T two years in Office and They were already warning the public obama would be the most traveled POTUS and the most Costly!

He's only been in office for less than two years, but at the rate President Obama is flying Air Force One around the world, he is destined to become the most traveled president in history—and also the most costly, when it comes to travel expenses.

Of the 10 modern-day presidents since Dwight Eisenhower, Obama is the most traveled in his first two years of office, averaging 27.5 days a year out of the country. He's already spent 55 days in office out of the United States, costing taxpayers millions as he attempts to expand the nation's influence overseas and attends economic and military summits required of all presidents, according to the National Taxpayer's Union Foundation. And he could have been gone more: domestic political troubles forced Obama to nix some travel.

In a new report, the taxpayers' group also reveals that the previously estimated costs of presidential travel have been vastly underestimated. While it is impossible to get a complete tally because so many agencies are involved, one key element—Air Force One travel costs—is amazingly higher than previously stated. Earlier news reports have pegged the jet's cost at between $34,000-$100,000 an hour. But the Air Force told NTUF that the actual cost is a whopping $181,757 an hour. That means that the president's two recent trips to Asia and Portugal cost the Air Force alone $11.4 million and that doesn't include other costs like food, hotels, staff expenses, and all the other aircraft and Secret Service cars pre-positioned at each stop.

The above article is from 2010!
This P O S was costing the American Tax Payer More Than He's Ever Been Worth From Day One! 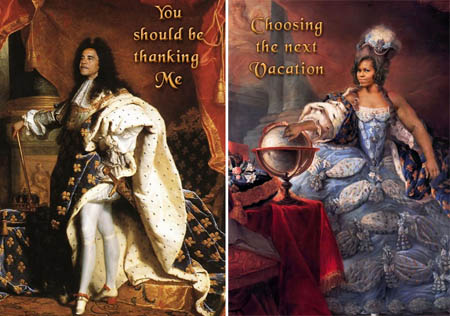 muse7
So is this what Conservatives spend their time "exposing" now? Gee, who would have thought? Flying a jet from country to country is expensive!

As someone that is neither a Conservative or republican,

The president jaunting around on my dime, is not made better by corporate welfare in any way shape or form.

It is a fallacious argument to deflect.

Myriad of reasons why this is true.

None of them are worth making a fuss about.

Unless you just want to hate on him. In that case, I'm all for it.


Just for the record George Bush spent most of his vacation time at his ranch in Crawford Texas at very little expense to the taxpayer.

The major difference is the fact that Obama is doing this when Americans are struggling to get by.

Nothing like a good slap in the face to teach you a lesson.


You are outraged because Obama has taken 3 more trips than Bush?

How much humiliation can you take?

After all the proof and all the empty rhetoric that this current dictator has promised but not delivered???????

You must really hate this country!


I think Obama kinda missed that whole section on the roots and causes of the French Revolution. It's an interesting little piece of history to take in. It ought to be required reading for Presidents..before they serve a day. Especially ones with a 'Me' complex.


I am outraged at the expense of Obama's vacations.

Do you suppose that he took these kind of expensive vacations when he was a senator, or even as an attorney?

posted on Mar, 24 2014 @ 12:31 AM
link
I'd be willing to throw a couple of bucks into a hat to send them all on yet another vacation---provided it was to Mars! Heck, I think we should send his entire administration and the Congress along. It might cost us a bundle initially but in the long run---we'd be far better off if we just held a lottery and picked names out of the phone book to represent us in DC. What are the chances we'd get 90% criminals in that scenario?


Hate is a rather harsh word. I really don't even know the man, nor do I want to.

Loathe is a more accurate sentiment.


We should at least make sure that it is a one way trip regardless of where he goes.

And then call people out as trolls cause we find it funny that you guys cant be rational in comparing presidents work.

Obama sucks as a president, but the right is so lost that there shooting themselves in the foot every chance they have.

muse7
So is this what Conservatives spend their time "exposing" now? Gee, who would have thought? Flying a jet from country to country is expensive!


Just how far would you be willing to go for Obama? Would you support him if he bragged about killing unarmed people overseas and then bragging about it and kids were also killed? Looks like you do.

Why do you think anyone complaining about wasteful and frivolous spending by an official or president means they must be a conservative? Do you mean to imply that only conservatives respect laws and decency and can do things while honoring civilized ethics?

Do you know who our president is?

Did you know his wife and mother in law spent millions in Beijing China and stayed at the Westin in Beijing for 8,350 dollars a night, and Obama's Mother in law and Michele treated the hotel staff like garbage and never stopped hounding and barking orders at them for this, and that, and on and on they went. I have friends that work there and got the real scoop. They are expecting the highest honors for being the most obnoxious pigs. Some of the hotel staff were so upset about being treated with such disregard for even the most basic of courtesies, that they just left their jobs.
The entire Obama family is quite needy of all the riches and comforts of the world at your expense, and what do you think they would feel about you?
They would blame you for the need to help them into the white house in the first place and then laugh at you afterwards, and finally spit upon you.
These are an honorless style of people no matter what they do. I don't see how any self respecting American could tolerate this kind of behavior and keep giving it a pass.
Would you encourage this behavior in your children?