The video above show some of the true extent of what has happened in Palu , Indonesia . In effect what has happened to the city is that it has been covered in water :
most of the city was on flat ground , and the surrounding geography plus the very close location of the severe earthquake meant that nearly all of the city completely inundated for a short time .
Palu was home to well over 300 000 people , and the surrounding areas along the coastlines had up to 300 000 people , mostly living near sea level .
It has been reported by Western media that up to 200 000 people are in need of help . This could mean that at least 100 000 people are missing , and possibly many more . Simple analysis of the geography the maps and logistics of this event do add to the case that this event was one of the much larger in scale than most in terms of death toll .

This topic deserves a new thread because of the sheer severity of the circumstances , please before denying there is a case to make here , do your research . As yet the Western media are unlikely to inform us of the scale of such a calamity , they are bound to rely on official figures for death tolls and likely bound in some manners to obfuscate the reality for the time being .
Others and myself have kept a close eye on what has unfolded in Palu , there is a thread here www.abovetopsecret.com...

Drone footage has allowed to users to assess the damage , and in this case looking to other non-western channels eg youtube gives us further oversight . Being fair to the bbc they have reported reasonably thoroughly , producing an article yesterday entitled 'Palu hit by worst case scenario' ,
and they have continued reporting on the ensuing humanitarian situation for expected updates .
Do your own analysis as regards the title of the thread and provide a view about what we may able to estimate regarding the numbers lost . Please be respectful and do not make off the cuff the assumptions about perceived intent . This is more a matter of historical record , and if this event created losses in the field which has been put , it would make it one of the worst natural disasters on record . Don't forget the earthquake also caused liquefaction of the ground in places and video testimonials to that terrifying phenomena are also available from Palu . The ingress of a wall of water moving at over 400 mph in deep water , 20-30 at the coast, may have covered over 30square kilometres of the low lying city , progressing over 5-6 kilometres inland , all of which was densely populated albeit in low enough buildings . We extend our sympathies to the survivors in Indonesia and as for those which this great calamity has taken we hope they rest in peace .

nor are the casualties anywhere near what this member is claiming but I noticed from the moment this was first reported that this guy was over claiming disaster, had half a million people or better dead an entire city demolished waves twenty feet high. I dont know why. The reality was bad enough and sad enough. I dont get the need to exaggerate the losses.
Seventy thousand homes and fifteen hundred lives lost is certainly disaster enough and for sure deserving of our prayers and thoughts and maybe even some of our money to help rebuild.

thanks, edited . That helps explain why the inundation (up to 6 metres) didn't remove everything on its way in and out , except at points of heavy flow

posted on Oct, 4 2018 @ 07:56 AM
link
Current news this evening says 1400 bodies , but more are being discovered as they clear out more damaged buildings.

They move up to 800km/h in the water, but you're right they slow down to tens of km/h on land.

posted on Oct, 4 2018 @ 08:13 AM
link
They have been talking about Palu for years, and how rising sea levels would virtually consume the island.


The problem here wasn't the tsunami, it was ground liquifaction. The soil here is sediment deposit layers like clay, mud, sand, dirt and earth. Water sits on top of the clay layers and forms the water table, which is a layer of water mixed in with sand and dirt under a solid layer of earth.

When left to settle, the top layers of earth will be dry and solid. But as soon as there is an earthquake, the shock waves bounce off solid rock and are reflected in every direction like a speed boat going along a river. That agitates the water so it dissolves the solid earth layers on the surface so it becomes a liquid. Everything from buildings to people, pets and vehicles just sinks into the ground. If homes are built on bedrock, they are safe, but if they are built on top of what is really an underground river, they will sink.

A similar event happened with the New Madrid fault back in 1811/1812. The ground was described as "writhing like a snake" as far as the eye could see. In this earthquake they described the ground moving up and down like a spine.


I dont know why.

You don't know enough .
This question is based off open facts available from every outlet

By Thursday, the official death toll stood at 1,424, but it is widely expected to rise as most of the dead accounted for have been from Palu, while figures for remote areas are trickling in or remain unknown.

“There are so many challenges with this disaster, it’s never been so bad,” said Frida Sinta, an aid volunteer trying to get basic food and other supplies out to fellow residents of Palu.

The city, 1,500 km (930 miles) northeast of Indonesia’s capital, Jakarta, has teetered close to chaos this week, with outbreaks of looting, but a recovery was evident as some shops and banks reopened and a major mobile phone network was back in operation. 
No 300,000 people was not killed.
No the video does not show the true extent of what happened in Palu, Indonesia.
No, the city was not, in effect, covered in water.

I am not saying that you are lying. The video is somewhat deceptive, if you don't catch that it shows the area of SOUTH Palu - and only part of it. More specifically the Balaroa neighborhood.

Also, as far as I can tell, it does not show the destruction of the tsunami, it shows houses that were destroyed be liquefaction caused by the quake itself.

This article from New York Times goes into details.

The image below of Palu Bay show how relatively little damage the tsunami itself did. Notice that the vast majority of buildings is intact. 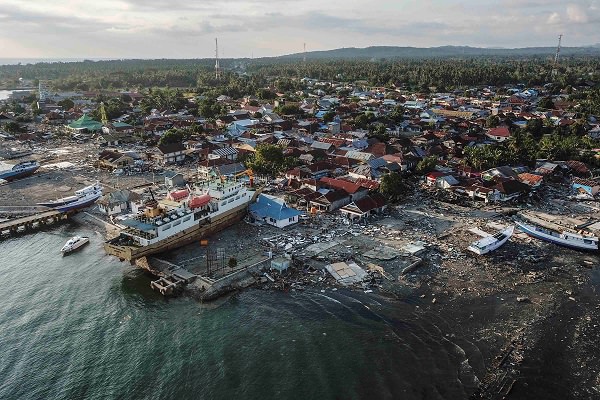 I greater resolution version of the image can be found here
edit on 4-10-2018 by DupontDeux because: (no reason given)

posted on Oct, 4 2018 @ 08:53 AM
link
Some of the pictures show entire neighborhoods swallowed whole by liquefaction, where in an earthquake areas built on loose, saturated soil type ground will literally "liquify" from the action of the earthquake and essentially become quicksand.
Once the shaking ends the ground solidifies again, leaving the inhabitants buried in a nightmare scenario.
There would be little chance of escape in this situation, the victims in these areas would be buried under tonnes of solid earth.
I find it really difficult to watch the videos these days(especially after the horrific Japanese tsunami, watched it live as it was happening, saw many apocalyptic scenes on TV that day that were never shown again, with good reason) seeing people in mortal peril cuts me very deeply, its like watching the worst horror movie imaginable but the suffering is all too real.
Some people get immune to it but I feel as i get older it affects me more and more.
Regarding the OP I know they are expecting the death toll to skyrocket once the full extent of the horror is determined.
Considering it's a large city of 300000 people, not to mention many other populated areas are still cut off it's difficult to even begin to imagine the final toll.
I just pray that they were quick, painless deaths and they are now in whatever paradise they imagined there to be.
edit on 4-10-2018 by Osirisvset because: (no reason given)

Gives family sized tents, and drinking water. Check it out they have a campaign for this disaster.
a reply to: The GUT

originally posted by: The GUT
Anyone know where to make donations that will actually get to the people?


I certainly wouldn't trust the larger aid agencies, plus they already are very well funded.
My best bet would be to try and find a blog or report of someone there on the ground and getting stuck into doing real work that actually helps the people most affected.
Then I would contact them, get their paypal(or whatever)and fund them directly.
You would be able to get updates and see exactly how your money is being used. Would be a good idea too to direct any friends or family who also want to donate to your contact.
Just a thought anyway.

ETA: nevermind- watched the video in the Times article about liquefaction
edit on 4-10-2018 by KansasGirl because: (no reason given)

I'll say this AGAIN...STOP insinuating that "hundreds of thousands" have been killed in this event!!

You must have 3-4 threads you've started insinuating this same thing.