UFO distraction... what is this stick figure?

posted on Jan, 29 2014 @ 05:18 PM
link
It seems the light was a distraction from the "being" because they never seem to see it or mention it in the video. Not sure what I make of this but I can see the thing walking as a person would. I watched it in full screen on a large monitor. Just odd! Nice find! S & F
*NOT buying the "he was moving the camera, optical illusion excuse", because the thing clearly walks from middle to the left. Furthermore, nothing else is moving like that. Watch carefully!
edit on 29-1-2014 by Staroth because: (no reason given)


well the figure isnt there when he pans back later on in the video,

somthing was walking off to the left in the begininning


well the figure isnt there when he pans back later on in the video,

somthing was walking off to the left in the begininning


Because the "sticks" were relatively close to the camera, and the camera man had walked forward a bit, so the sticks were not in the same location relative to the image frame as they were when he was standing farther back.

posted on Jan, 29 2014 @ 07:30 PM
link
I am relatively certain that this object is NOT stationary. Therefore it could not be a tree. I don't know what it is, but I do know that it is moving. If you pay close attention you will see that the cameraman might be moving, but the angle of the camera facing what we know is a tree doesn't change, therefore the distance that is being created between the "stick figure" and the actual tree cannot be accounted for by the motion of the cameraman.

posted on Jan, 29 2014 @ 07:46 PM
link
Wow, this is really interesting. It definitely moves like a person...and when you pause, play, pause, play..I think i can see walking and the arms moving as well, although it appears to pause a bit after 5 seconds.

posted on Jan, 29 2014 @ 08:17 PM
link
Really? We are going there with this thread? Pages debating whether a bush is an alien, AGAIN? These kind of debates are getting so frequent at ATS nowadays I'm sure I can't be the only person who feels we're reaching the breaking point into complete retardation, where all logic is thrown out of the book in favor of whatever childish fantasies people have.

It's such a debate about a "stick creature" that truly confirms the kind of intelligence we have residing in this forum. What twisted fantasies do you harbor if you're really going to sit there convinced you're seeing a "stick figure alien" or something walking around in that video?

If you can't understand things moving in perspective to the camera, and slightly bizarre effects created by mediocre stabilization software, you shouldn't be analyzing video clips.

Go out and shoot some video. Come home and stabilize it. You'll see exactly the same effect. Stabilization software works to, yes, stop camera shake, and how do you think it does that? It adds and detracts pixels as necessary to create "new" space, to fill gaps and double frames in some places. It warps things, and it can do VERY odd things with foreground objects, keeping them steady whilst the background moves around, and vice versa, completely steady backgrounds and very odd foreground object conditions.

This is the second time in a week a thread in this forum has snowballed because of someone trying to convince us a stick or a bush is up and walking around. I've seen plenty of UFO's, but this stuff, it's reaching an all new, retarded low. Threads like this make me ashamed to get involved in UFOlogy around here.

Go and play with a video camera and some stabilization software and then come back and see if you're still seriously convinced it's a creature. I'm not questioning people's beliefs, they are your own. But as a video editor, what's going on in this video with the so called "stick man" is really not something hard to see or understand, even if it is to some people.

If only we could see the un-stabilized version, that stick etc would be clearer to "understand".
edit on 29-1-2014 by markymint because: (no reason given)

posted on Jan, 29 2014 @ 08:35 PM
link
I'm not sure what it is but:
around 6 secs he guy says " my wife saw it green, and now its purple, we do not know what it is". While saying that phrase he is moving forward which can explain why the "straw" is moving.
But right after that, he turns his head and the camera towards his left, showing the sun setting, and he says :"look at the sky over there". at that point, during that motion towards left,we have 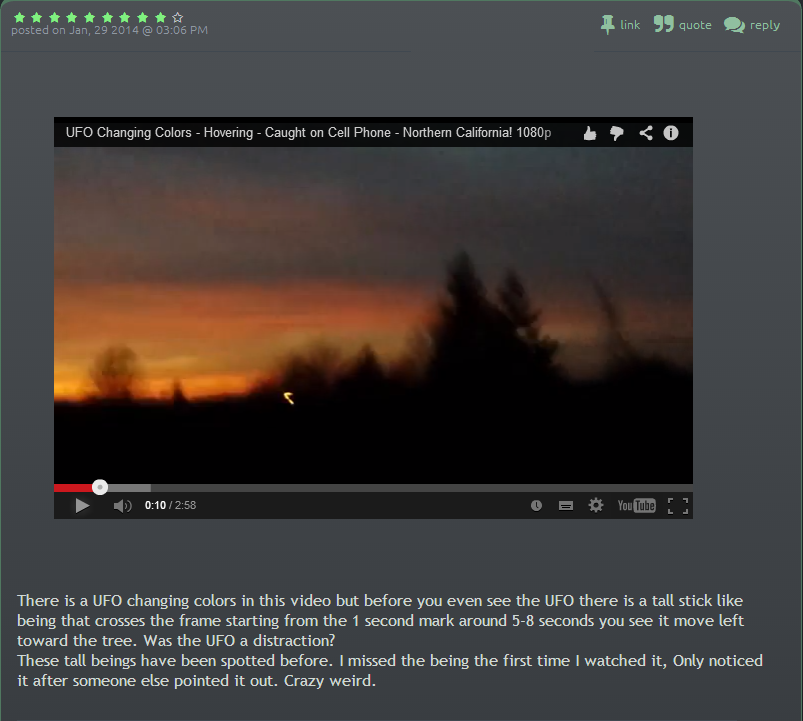 then he immediately (~ 1 sec) turns his head towards the right again to try and point at the flying object again.
while he is turning towards right 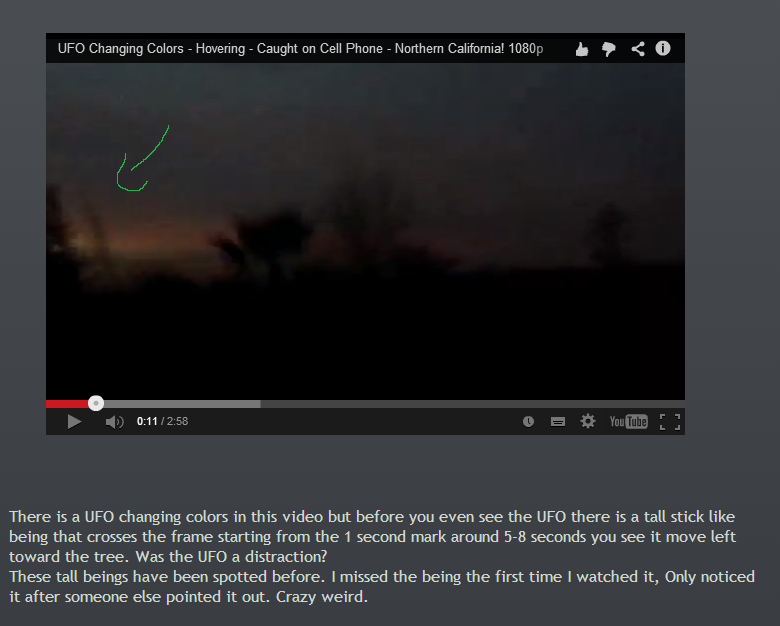 its safe to assume he didn't walk backwards in an urban area full of vegetation the moment he turned around (for a second) to record the sun, so during that time the distance between the straw and the tree "its heading to" should be the same but its not. But still its too weird to be something..

Daytime shot of his yard and his view, it was that tall skinny tree with no leaves.

Furthermore, this guy who made the video is a minister and I see where this whole thing is leading now...NOT COOL!
edit on 29-1-2014 by Staroth because: (no reason given)


Excellent work. Still hard to figure how it seemed to move and nothing else did, but that definitely appears to be a tree.

posted on Jan, 30 2014 @ 12:45 AM
link
Its literally a twig or sapling in the foreground. Its probably no further than 5 feet away. More importantly whats up with the actual ufo in question. We can write off the "stick man" but theres still that show in the background.

posted on Jan, 30 2014 @ 12:55 AM
link
While I'm pretty sure the tree is just a tree, I think it's a nice coincidence that a green light was sighted over it Australia recently too.


There is a UFO changing colors in this video but before you even see the UFO there is a tall stick like being that crosses the frame starting from the 1 second mark around 5-8 seconds you see it move left toward the tree. Was the UFO a distraction?
These tall beings have been spotted before. I missed the being the first time I watched it, Only noticed it after someone else pointed it out. Crazy weird. 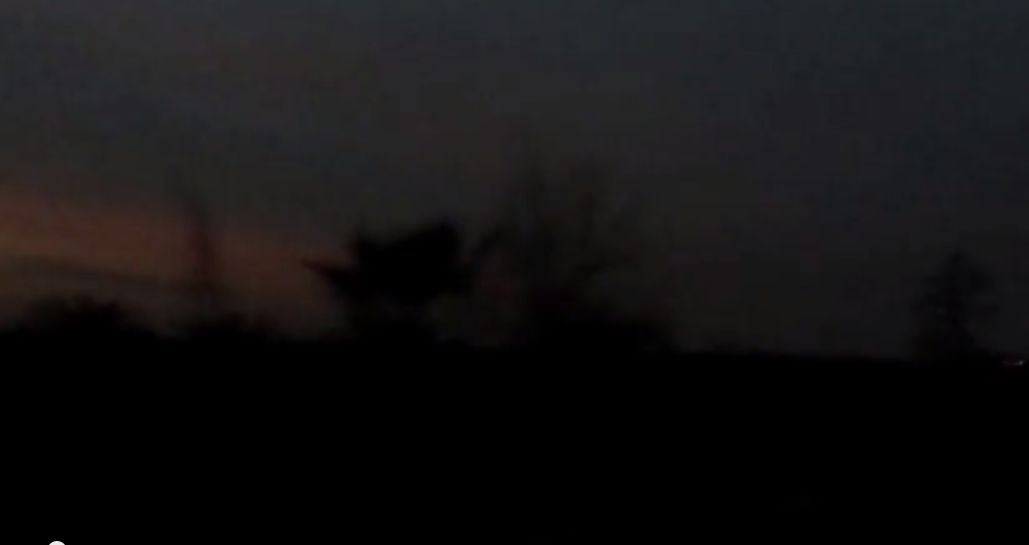 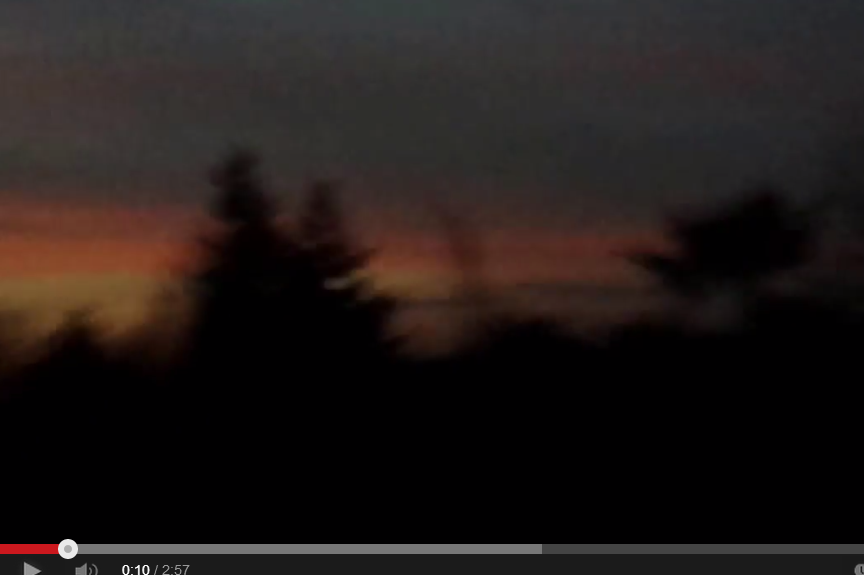 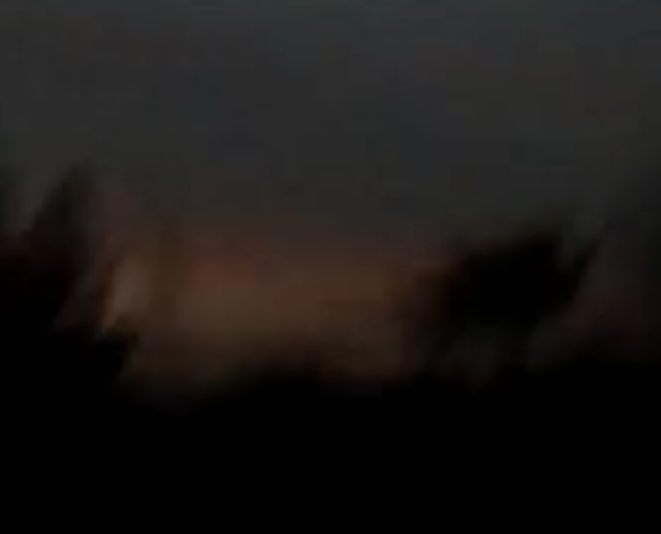 To me it moves, and changes posture.

Staroth
I take back what I said before. I took a clip from his UFO video and placed it over a day time clip of his yard (that was on his youtube) and it matches 100%, it was only a tree.

Good work. Everybody should (but probably won't) read your post before commenting on how it's a 'being' walking off to the left.


Uhm... I dunno, could be a camera trick. But, it does look like it is walking. Then disappears.

But it really does just look like the tree in his yard from the daytime pictures. Hm..

I am not good at analyzing videos so i won't argue one way or another. This stick thing reminded me of that cool video in Russia of the creepy stick creature walking down the building.
edit on 30-1-2014 by turnaround because:

posted on Jan, 30 2014 @ 08:38 PM
link
Yeah that old vid! And there have been a couple of well made videos. But that's the thing, stick people walking around are confined to those two or three videos that have occasionally cropped up. They don't feature in any real reports, no Rendlesham's of the stick person walking around world throughout history... Your friends and mine don't mention stick people like they might aliens or UFOs. So even before the video, like this, exists - there's nothing in this world at all, other than these few youtube videos, to suggest any kind of stick shaped aliens are here. Reptilians are never described as sticks. Worth considering the things that are reported en mass methinks rather than these wild accusations by a few YouTube/ATS/your life sensationalists.

There is much more than we understand and many more species visiting us than just a few. I am still scratching my head at the movement. It does not seem to be perspective at all... yet, I cannot explain it. very odd indeed.

There is much more than we understand and many more species visiting us than just a few. I am still scratching my head at the movement. It does not seem to be perspective at all... yet, I cannot explain it. very odd indeed.

When I first saw it I was in awe...Then after reading the posts I realized one can easily duplicate this process in his/her living room, if you can find 3 people who will pretend they are trees...

Bummer, at first I saw the treant! But now I see, in this isolated clip, that the cameraman is indeed walking to the right, and it appears to be a stick that is close to the camera. I confirm this opinion by counting 5-6 shaky steps to the right, corresponding to the stick moving.