For anyone wondering what 2 large birds; one black, and one white means; the picture below should answer everything perfectly. posted on Jan, 26 2014 @ 08:32 PM
link
I think there are many more options for interpreting this if we want to consider it an omen for speculations sake.

However I do find it to be rather uncanny.
And if it were faked, it would be difficult to achieve.

So all I really know is that it's pretty messed up.


Are those delicate little white doves even bred to live on their own in the wild? I mean, wasn't this act a little irresponsible to begin with?


what has the yin yang symbol got to so with it????


It doesn't pay to be peaceful?


That the person bringing peace and safety is not a bringer of personal freedom and your spirit guide is warning you away?

But then again, I'm mistrustful of this Pope.

1st haha that's an ironic... I message of peace with a crescendo of blood.

2nd well that's the world we live in


I'd like to ask a Indian Elder if this has an symbolism to him as a sign of the times. 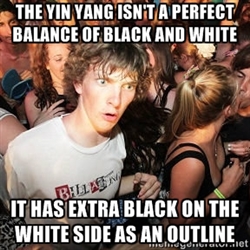 
That the person bringing peace and safety is not a bringer of personal freedom and your spirit guide is warning you away?

But then again, I'm mistrustful of this Pope.

I don't believe dove's even fly that well? I usually see them just flutter helplessly to the ground (mourning doves?)

If a dove did actually bring an olive branch to the biblical ark, I would be surprised as they don't seem capable of long term flight.

Nope didn't know that lol stupid doves... If it was dove season they wouldn't have made it much further anyways hahaha

Hmmm, this is interesting.
I was thinking there was some sort of 'fowl' play so I came back and looked around.

Why continually release them just to get creamed like this?
Should release them somewhere else safer? Nah it wouldn't be memorable now would it?

EsotericGod
I think mother earth is trying to tell us something...

Maybe the whole circle could be outlined in Gray or Silver to resolve this problem ?

posted on Jan, 26 2014 @ 09:58 PM
link
How can you confuse Taoism with Catholicism? That's the Yin Yang sign . Anthropological ineptitude does not becone you.


I think I got it:
Seagulls and crows attack and/or eat smaller birds. Doves are easy pickins for most predators.
We live in a world where images travel immediately around the world.

Life feeds on life...and not everything in the universe, or even on the planet, revolves around humans. It's a little thing called nature being normal.

Just to point out that if you want to point out any symbolism, crows and seagulls are found by the thousands in garbage dumps, eating the most putrid food- and non food items. If this "event" is symbolic of anything, keep the idea of garbage eating, diseased bottom feeders on mind.

That's what makes it even better.

It was attacked by the 'light' of the Seagull, and managed to escape.

This year; the light managed to escape again; except this time; the true Divine powers sent darkness as well.

And it was reported that the dove that was attacked by the darkness which came with the light .. did not fare so well.

The Holy See are officially done in this world.

The 'Archons' of the 'Arch'diocese; were brought down by their own 'Arch'angels.

The Archon Messengers (correct meaning of Angel); have officially defected from the Catholic faith. Namely Samael; the 'Messenger of doom', (or Angel of Death as they call him).

He is the dark 'spirit messenger'.

This means that the 'spirit' of the 'Holy Spirit', or Catholic church; no longer has dominion in this world. Their new chosen King turned his back on them.

By this; I should tell you all that it is NOT 'Spirit/Soul/Body'.

WE ARE A BALANCE OF SEEN AND UNSEEN; WHICH IS BODY AND SOUL. The spirit is an artificial marking that is put on us by the Archons in order to track our SOULS; because they do not understand how they work, and wish to. This enables them to control; manipulate; DECEIVE and enslave us.

The Catholic church is their construct.

THE CROSS HAS BEEN BROKEN BY SAMAEL.

THE END DOES NOT COME; ONLY THE END OF CATHOLICISM.

Forget all the fear of 'End of days' that is written into the Bible.

The Archons entire agenda and religion is based upon fear. They have controlled us through fear; and it was through one WHO DID NOT FEAR THEM, that they were beaten.

The spirit markers are being removed now whether they like it or not, as we are under new management.

THE ARCHONS WILL BE LEAVING!

And a certain Queen, and her interests in the West have A LOT OF QUESTIONS TO ANSWER from the new management; and some VERY PISSED OFF FRIENDS OF THEIRS! *Looks up*

Have a nice day people.

My work here is done.