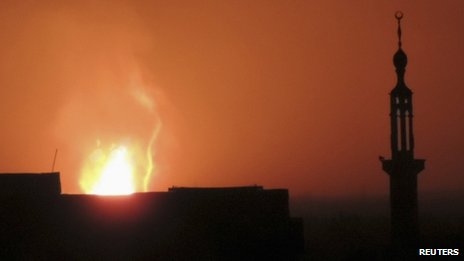 Residents say the entire capital has been plunged into darkness, while officials have described the power cuts as countrywide.

A gas pipeline was attacked near Damascus causing the capital and the southern part of Syria to suffer a blackout, SANA news agency reports. The electricity minister blamed the blast on rebels. It is not immediately clear how extensive the blackout is. The minister said maintenance crews are working to restore power. Media reports say the capital city of Damascus is covered with thick smoke and shell explosions are being heard. "The whole city just went dark," Reuters cited a resident who lives in the center of the city. A woman, who asked to remain anonymous, said she saw the "major glow of a fire" near Damascus International Airport and heard the sound of heavy machinegun fire.

An explosion near the airport in Syria's capital, Damascus, has been followed by a blackout in parts of the city, state media say. Power was reportedly cut after rebel artillery hit a gas pipeline. Syria's state news agency SANA quoted Electricity Minister Imad Khamis saying maintenance crews were working to restore supplies.


Doesn't Russia have a major Natural Gas pipeline that runs through Damascus? S & F either way. Thanks!
2nd


Your mistaken my friend, the us is backing the "free syrian army" the good guys xD
/Sarc


Isn't there some prophecy of Damascus being destroyed?

I looked around for a link and there are plenty, but here is one - for those who would like to read more about this specific biblical prophesy.

The article is from Sept. of this year. Isaih 17 Prophecy has been Fulfilled

Trivia tidbit - there is also a Damascus in Maryland.