posted on Oct, 16 2013 @ 04:06 PM
link
Ok , this is real freaky , Mayor Bloomberg makes an announcement about sorting out the homeless in New York city, whilst covered in blood.!!!

They aren't a problem any more , they have been permanently taken care of. 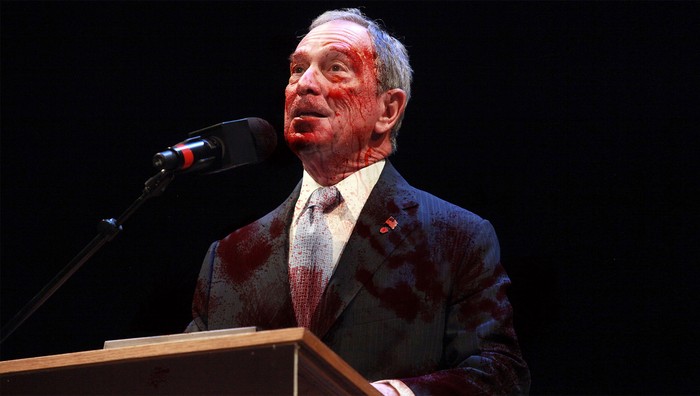 What is the reason he is covered in blood , is it theatre ? , did he actually commit a crime?

Why be seen by children like this, what is his purpose?

And what happened to the homeless people?


It's the onion.
Nuff said.

If you read more articles you would see it's all for laughs and they got you.
edit on 16-10-2013 by thesaneone because: (no reason given)


ats requires more than one sentence.


Ok , so what's funny about being covered in blood??

It's the Onion. And their satire is brutal.


It never happened so don't lose any sleep over it.
The Onion is an American news satire organization.

And depending on your sense of humor it can be funny.


So it's all photo-shopped and not a real picture of him covered in blood?

Read some more of their headlines you might get a chuckle out of some of them.


Don't think I like that sort of humour , kind of sick really.


Star and flag for making my day more interesting.


What can I say, we all find different things funny.

Can the mods put this in the right area, thank you.


Because it's and extraordinary picture and I did not get that , sort of thing can be considered a joke or even funny , so yes for a moment , I thought it was possible.
I thought he had had a breakdown or something.
edit on 16-10-2013 by Pinkorchid because: (no reason given)


A) The Onion is a satire site.

B) The "blood" is photoshopped. (Easy to tell as I've used the same brushes previously. They're available on DeviantArt.)

Now, if this wasn't a piece done by The Onion and the blood real... I'd seriously lock my doors. :: Wink ::

It is funny, not originally, but this thread about it is.


ok enough said , lets move on to something worth wild. Fool me once.
Everyone got a star for participating , my apologies.
edit on 16-10-2013 by Pinkorchid because: (no reason given)

Lol , this feels like one of those moments when you walk out of the toilet with the paper hanging out the back or when you stubble in front of a huge crowd and everyone laughs, duhhhhhhhhhh.
edit on 16-10-2013 by Pinkorchid because: (no reason given)

Aww, pink i feel like that at least once a day.


Classic! I love The Onion. Also, I wouldn't be surprised if the lunatic Bloomberg has actually considered this.
Speaking of onions, I just made a thread that features onions. I think it's more than coincidence.