Is this unidentified? (UFO) 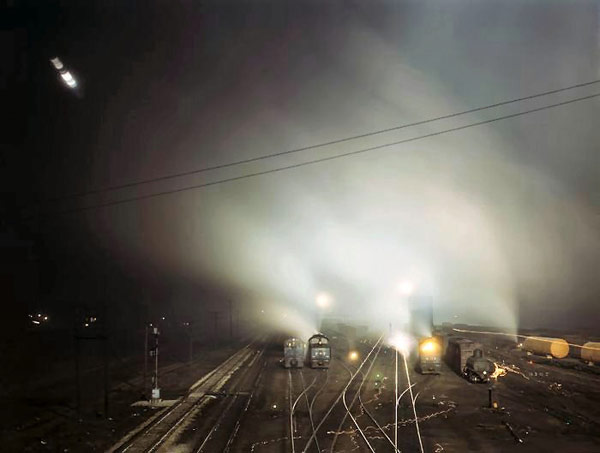 Here it is again. I've lightened it a bit below the object to rule out that its attached to a pole. 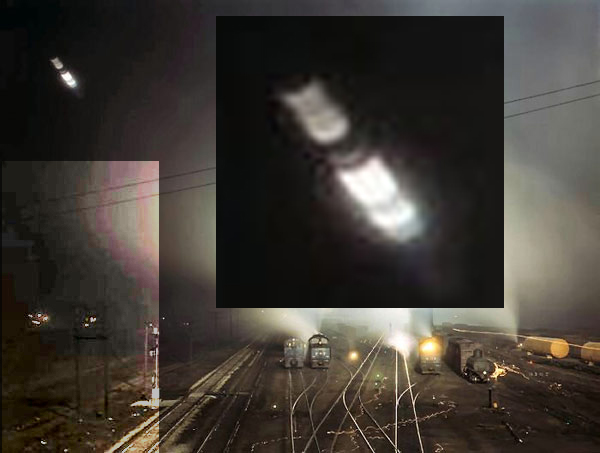 It's not swamp gas, or Venus, or even a low flying comet
Maybe I'm missing the obvious?
What say our ats experts ?

posted on Oct, 3 2013 @ 08:36 PM
link
I know very little about such things, but could it be the moon with some reflection off the camera...or something like that?


hi Mr.VoidHawk..
is the cameraman notice there is something Big on His foto..
Looks like a Lamptube..

Is it a time lapse photo? look at the light streaks next to the train and on the tracks.

There`s another odd looking thing on the left near the bottom.

posted on Oct, 3 2013 @ 08:44 PM
link
No report or just this photo? Personally I don't believe in these things when they're not seen but turn up in a frame or one photo. If the photographer didn't notice this object in the sky when the photo was taken then gotta assume it wasn't an active 'craft', myself. There's no visible motion to it, so it's not as if it was caught flying past. Again, I don't believe in this presumed phenomena of "craft" appearing (especially static) in a lone photo or frame. It doesn't correlate to anything in this subject really, it's a made up "phenomena" IMO.

Nice photo tho Someone with more expertise will probably be able to prove what it is or how it's occurred into this image.
edit on 3-10-2013 by markymint because: (no reason given)

posted on Oct, 3 2013 @ 08:45 PM
link
Looks like the bone thrown in Space Odyssey has ignited on re-entering from orbit.

Tardacus
When was the photo taken? That will give us an idea of what technology was or wasn`t available at that time.

Is it a time lapse photo? look at the light streaks next to the train and on the tracks.

There`s another odd looking thing on the left near the bottom.


I have no info on the photo. I was given about 150 from a friends collection a while back, they are all quite old , some more than 100 years, (some more in my sigy). This one was in with some other old train photo's. They are steam driven so the photo must be quite old.


hi Mr.VoidHawk..
is the cameraman notice there is something Big on His foto..
Looks like a Lamptube..


Hi Cheesy.
Dont think its a lamp tube, its too high, and I'm not sure they had modern street lights back then

I hadn't noticed that.
I wonder if there was a very long exposure time, and those streaks could be someone walking with a lamp? If thats the case then the object in the sky must have been stationary.

posted on Oct, 3 2013 @ 09:31 PM
link
Pretty cool shot.. If that's a long exposure shot, the anomaly is sitting quite still.. The streaks along the tracks.. If that's a guy with a lantern/flashlight.. He needs to get tested.. Looks pretty liquored up following those squiggly light lines..

posted on Oct, 3 2013 @ 11:10 PM
link
This is a photograph of a Santa Fe railroad yard, taken in March of 1943. Metadata and very high resolution copy can be found on Wikimedia Commons at preview.tinyurl.com...

The exposure times required for night-time colour photographs during that era were quite long, as evidenced by the squiggles of light near the ground. Those would be where a railroad worker with a lantern was walking near the tracks. A walking person wouldn't have gotten enough exposure to appear on the film, but his lantern would have. Even very large objects, such as the locomotive marked "S43," appear ghostly and transparent because of this effect.

On close examination in the WikiMedia Commons high-resolution version of the photograph, I conclude that it is the result of light from a ground source refracting off a cloud of water vapour or steam relatively high up in the air. The unusual appearance is an artefact of the camera technology of the time, which required an extremely long exposure time.

Diogenes
edit on 3-10-2013 by DiogenesTheDog because: Inserted a TinyURL shortened link to fix the WikiMedia Commons link that ATS automagically broke


Thanks for the info about the photo.
if it was a reflection off of a steam cloud the cloud would have to have remained perfectly still and not condensed for the entire time the camera lens was open, is that even possible?

Here`s a link to hundreds of color photo`s from the 30,s and 40`s from the library of congress.


Here's a photo of another rail yard in 1943, and you can see street lights in the background.

The first electric street light was used in 1875, so by 1943 they would be pretty common.

if it was a reflection off of a steam cloud the cloud would have to have remained perfectly still and not condensed for the entire time the camera lens was open, is that even possible?


I wonder if it is possible that the pic was taken from behind glass? What it looks like to me is a reflection of a fluorescent light on glass. I don't know if those kinds of lights were invented at the time, though. It's a very interesting pic and I DO believe in the UFO phenomenon, so it's hard to say for sure. Definitely not saying it isn't something very unusual. Just throwing that idea out there.

I'm glad you posted it. It makes one think, and it's a very nice pic!


I was thinking the same thing, it almost seems like it was taken through the window of a building. Notice how high the camera is compared to the telephone poles in the picture? also in the link that diogenesthedog posted there is an extremely high quality version of the picture with a feature that lets you zoom in very close to things in the picture while maintaining the quality.

When you zoom in close on that "strange" object towards the bottom left it`s not so strange at all,it looks like the headlights of trains reflecting off of a window.
if you zoom in towards the right side of the picture you can see the faint ghost of a train that isn`t in the picture anymore.


That makes sense, after looking at it closer it has rounded edges like a train light it only looks like a much bigger light because of the exposure time and the movement of the train.

posted on Oct, 4 2013 @ 11:04 AM
link
Well based on the fact that this photo was taken in the 40's. The exposure time would have been incredibly long for this to have been in color. From my observations, the "object" is identified and is in fact the moon.

The reason for the change in brightness and absolute disappearance in some areas cloud coverage. The line is perfectly straight, and the shape can be clearly seen when the high res image is enlarged. It is a spherical shape and the exposure time would coincide with the the movement of the moon through the night sky. 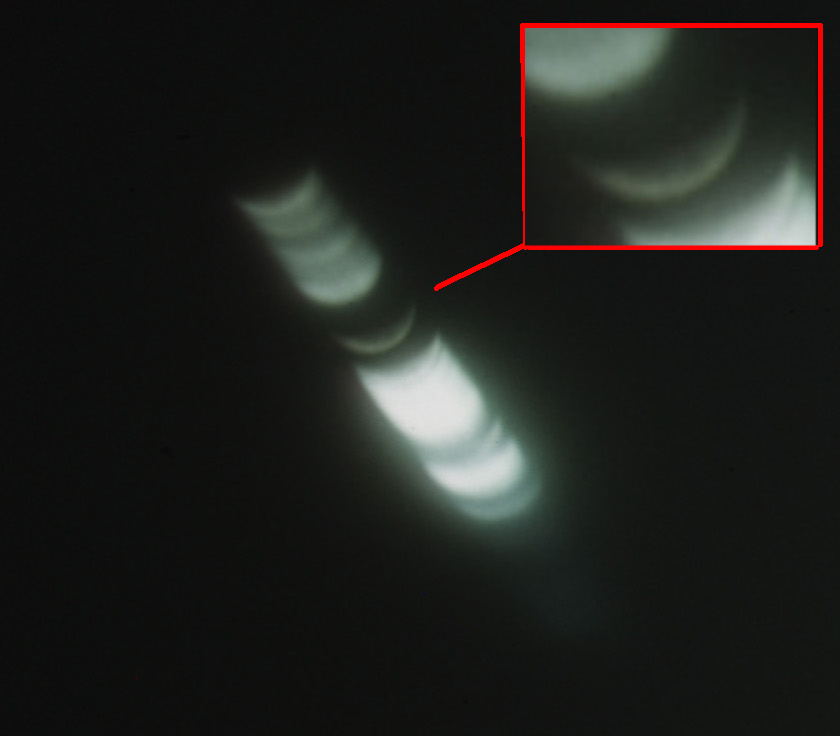 
With less light it seems to be like this 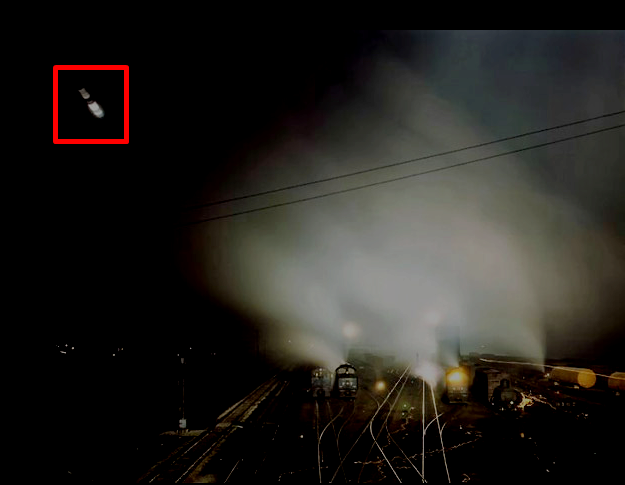 I hope this picture will help you to prove your self Mr.ZiggyMojo 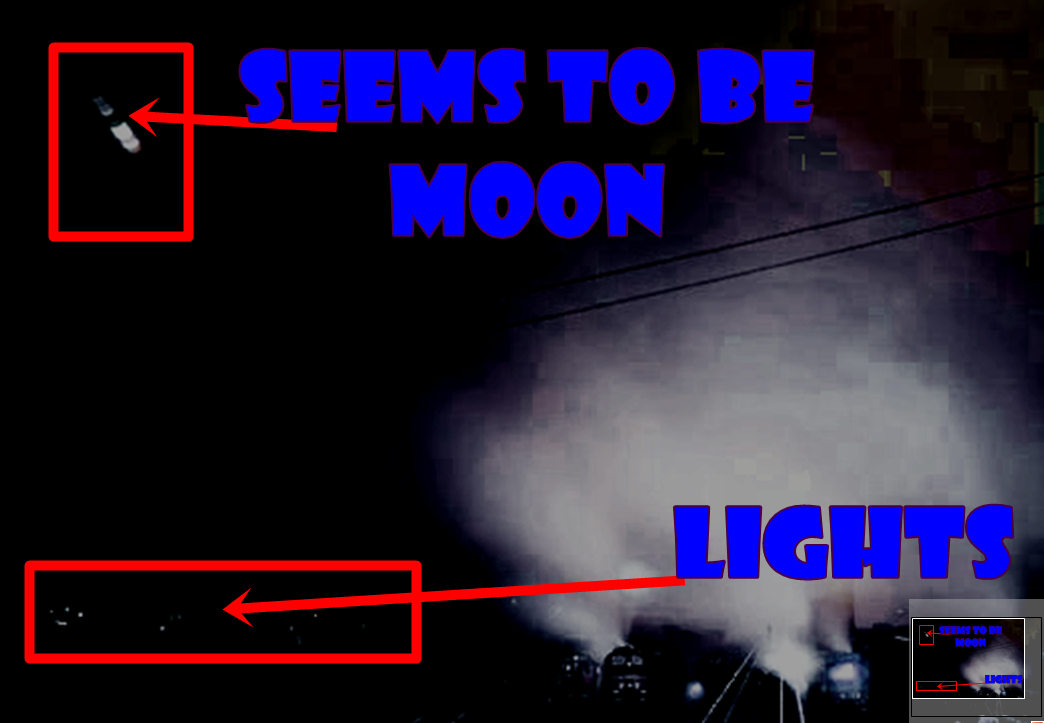 As you can see the starting of the moon is just round.

ZiggyMojo
It is a spherical shape and the exposure time would coincide with the the movement of the moon through the night sky.

You know, I think you're right. That's a better theory than mine.

In either case, it's still fairly pedestrian.