Truckers to shut down US, protesting the trampling of the Constitution, viral, 50k likes in 4 days.

posted on Sep, 20 2013 @ 01:33 AM
link
With a more than fair share of drivers being members of AFL/CIO, Teamsters and other affiliated groups, this is not likely going to go down well. If it goes down, it might even make Mr. Hoffa stand up and take notes, and give up his location in the process.


Obama your on notice:- 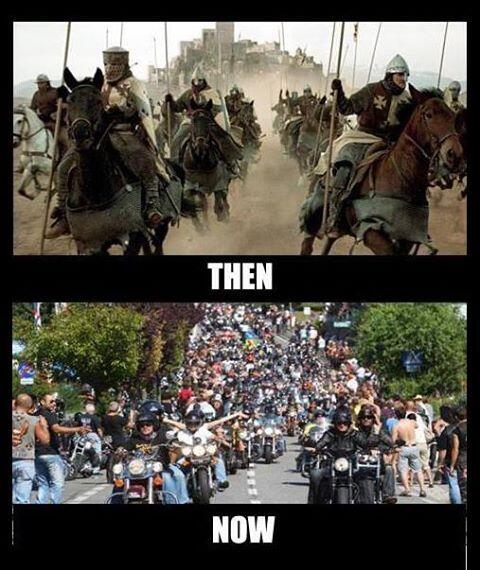 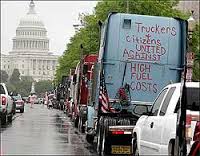 I can see the problem with the ACA and independent drivers being hurt however they should keep it simple making it about a single issue. Wasn't it gas prices at first?

You tack on to many things then it becomes like the occupy wall street mess where no one knew what the message really was.


I do think it's funny this is basically a strike.


Won't happen. They tried a few years ago and feel on their faces when they were told that there would be arrests of anyone in a convoy around the DC loop or the city.

Do you know how much three days down hurts? I barely want to take the time to reset my hours when I have to because it can hurt so much.

posted on Sep, 20 2013 @ 02:12 AM
link
For the disobedience of it all, I could almost be for this... if it weren't that their way of getting gas prices low was to try to control it... which will turn bad seeing as when you pressure a politician, all they seem to be able to do is call in a strike. I certainly don't like the sound of obama care though.

Why can't it be in protest of obama care and in support of clean energy?..like new fuel efficient diesels and natural gas trucks....maybe throw in a little more biodiesel into the mix because I have yet to see biodiesel being sold down here although i know it is sold elsewhere but not really that much. I don't know why. there are diesels that get much better mileage now and biodiesel does too but you can't take advantage of that without the fuel and the equipment.

It would make more sense than sending weapons to al qaeda....invest in some better usage.

they want to keep gas prices up. we shouldn't be wanting to burn more gas, we should be wanting to get away from feeding that beast. If they are going to make demands, why settle? Why not REALLY try to make a difference if the are pushing for a big movement this way? Hell, they get to spend astronomical money on fighter jets and drones... why not ask for some newer safer cleaner more efficient trucks?

I'm all for protesting obama care though... that junk is sounding scarier and scarier by the day.

posted on Sep, 20 2013 @ 02:18 AM
link
I do NOT support bikers running truthers out of DC though. We have some very professional americans who are a part of the truth movement. Family members of victims who have been working on this from the beginning. Architects and engineers did quite a bit of research and are some of the only open information that was given to the public... like the compounds of metal found in the dust and the other traces and all the professional accounts that are too numerous to list right now...and they just basically came in and kicked that whole endeavor, plus the family members for truth right in the balls.

I'm bracing for this to turn into yet another slap in the face.

posted on Sep, 20 2013 @ 02:58 AM
link
Well I doubt enough truckers would ever protest to shut down trucking all across the US and it's probably a good thing that a nation wide shutdown of trucking never will succeed.

If trucking was actually shut down nationwide and no goods were able to be moved, do you think the corporations are going to sit on their hands while they lose profit or do you think they may be on the phone within hours calling every Mexican trucking company they can find and paying them double to send as many trucks as they can to move their goods?

That is probably what would happen if trucking nationwide was ever shut down for more then a day.

posted on Sep, 20 2013 @ 07:05 AM
link
Although Im in Full support of the protest for the trucking industry. If just for 3-days the trucks stopped delivering goods, it could cause a massive ripple effect throughout the rest of the economy, and may just take this country to its knees. 3 days of food, is about all there usually is in a modern grocery store. If you havent planned ahead, like extra food, water, gas. then you may get hit hard. Be aware that it wont take much to start a ripple that grows into a Tsunamia.


First off, two thumbs up to for the truckers. One of the most thankless jobs on the planet. I tip my hat to them in appreciation and awe.
Second, the grammatical errors hurt my eyeballs, lol.

MrSpad
This is about as likely to happen as every other so called million something march than ends up being a couple hundred people that nobody pays any attention to.

You know I don't normally agree with your opinions, but this time you are spot on. I highly doubt anything will come of this. All those likes on Facebook are just likes from keyboard activists. I'll believe this event when it actually happens and actually causes some real noticeable difference. Most likely though, October 11, 12, and 13 will be just like any other day though.


Obama your on notice:-

Yeah Obama, we are all going to forgo an entire day's pay or more depending on how we get paid. We are going to lose money, and you are not going to suffer at all. Take that, Obama!

Glassbender777
Although Im in Full support of the protest for the trucking industry. If just for 3-days the trucks stopped delivering goods, it could cause a massive ripple effect throughout the rest of the economy, and may just take this country to its knees. 3 days of food, is about all there usually is in a modern grocery store. If you havent planned ahead, like extra food, water, gas. then you may get hit hard. Be aware that it wont take much to start a ripple that grows into a Tsunamia.

This is a great way to hurt every other American without bothering Obama one bit. What a great idea!

The good news is this might well be the first ATS prediction to come true. So, you know, swings and roundabouts eh?


I am going to predict that even if only one trucker is involved and one trucker alone, FOX and AM radio will try to make this seem like it was a huge deal and a real big blow to Obama.

posted on Sep, 20 2013 @ 10:20 AM
link
We need this. I hope it’s a huge turnout and inconvenience many Americans to the point where they open there eyes and understand how dire the situation is in America.

posted on Sep, 20 2013 @ 10:28 AM
link
Two big problems with the idea. If this gets popular, companies only have to say "If you are driving for us, and you participate, you will lose your job." Then it goes on your DAC, which follows you around forever. Any Owner Operators that work for that company are now less likely to get hired by another company (and most people can't make it as Independents).

The second is that an O/O pays for their own fuel, and receives a fuel subsidy from the DOT. It's based on both miles for the week, and miles per gallon for the week. Three days of driving around, unpaid, is going to hurt both in the miles per week that they're paid, plus the fuel subsidy amount. If you can keep your fuel mileage up per week, you can make a couple thousand dollars just off the subsidy. They're going to lose a lot of money, and it can take a couple weeks to make it up.

Great idea, and like I said in the other thread, if they just wanted truck driver problems (which we have enough of) solved, I'd seriously think about shutting down in support. But they went too far with their issues, so I refuse to have anything to do with it.

camaro68ss
We need this. I hope it’s a huge turnout and inconvenience many Americans to the point where they open there eyes and understand how dire the situation is in America.

How will that help?
Seriously, how will stopping other Americans who are suffering from being able to get things they need help?