The Blood of Eden. 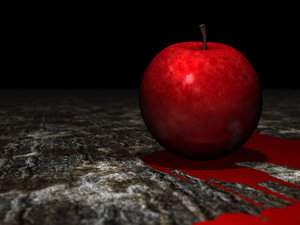 She lies there as the blood mixes her sacrifice for his desire,
and for a moment time stands still and the silence shouts echo.

Two hearts flow like water intermingled and carry on a single beat.
The heat of one joined soul burns through this garden like a wild fire.
An unutterable understanding between this separation is intertwined.

There is no him,

single in motion and action.

They are together as two became complete in this moment,
this precious moment defines eternal bliss...

But time relentless and unwilling to be bound tears them apart.
The Gates begin to close no longer held open by desire.
This creational fortress halts and divides them once more.
And though he holds her close, she is her and he is him again.
He lays next to her, they are no longer whole and the distance
from where they were is like a vast and open Ocean.

Now two separate individuals who lay together yet are alone, outside the secret garden.
edit on 16-9-2013 by abeverage because: (no reason given)

I love this! This short story invokes such imagery in my mind.
Definitely a +1 Keep on writing!

I love this! This short story invokes such imagery in my mind.
Definitely a +1 Keep on writing!


Thank you very much! Those are extremely kind words!

Knives4eyes
That was beautiful it reminded me of what Lillith Adam's first wife must have felt.


Do you think they both felt that way?

A present for your efforts...

A present for your efforts...


I am 15 again...I have a tiger stripped Mohawk, ripped jeans and bright orange hi-top Chuck's, I am wearing a white Clash T-shirt ripped over a black one.

I take a drag from a cigarette and blow a smoke ring at my friend who's got a nose ring and jet black hair. She throws a tape at me...

As I pop in the cassette the title is British Smash with doodles drawn on it. First song up The Buzzcocks, followed by The Fall, Wedding Present, The Cure, Gang of Four, Squeeze, PiL, The Clash, Joy Division, Echo & the Bunnymen, Bauhaus and just to depress me some Smiths...

I lay on the floor with hands under my head staring at the ceiling listening to words of post modern poets! We spend the afternoon letting the hours drift by doing nothing, I thought I knew everything!
edit on PMbAmerica/ChicagovAmerica/ChicagoTue, 17 Sep 2013 18:06:22 -0500pm6America/Chicago by abeverage because: (no reason given)