Idiot Obama didn't get to start World War III via Syria - even though he tried really hard to. So now he's moving on to trying via Iran. He didn't say the word 'red line', but that's exactly what his words imply. Obama says a nuclear Iran isn't acceptable and neither is any threat to Israel. This time he's saying that state it IS IN THE INTEREST OF THE USA ... something that Syria obviously isn't.

Mr. Nobel Peace Prize is prepping this time. Getting things set ... saying this is in the interests of the USA. He failed to bring WWIII and he has learned from his mistakes. My God ... What the hell is wrong with him? Jumping from creating one world war situation to prepping for another ... and barely a few days between.

I wonder if we'll have PUTIN fly in and save the day again. Obama is making America weak and making us a laughing stock to the world. I wonder if we ... the USA ... and the entire world for that matter ... can survive the next three years of him in office.

Here we go again. President Obama drew another “red line” Sunday, now on Iranian nukes — and insisted that this time, he really means it, despite infamously wavering on his red-line pledge about Syria using chemical weapons.

“My suspicion is that the Iranians recognize they shouldn’t draw a lesson that we haven’t struck [Syria] to think we won’t strike Iran,” Obama said in an interview aired on ABC’s “This Week.”

Obama stressed that he wouldn’t just talk tough but act tough when it comes to nuclear weapons.
“I think what the Iranians understand is that the nuclear issue is a far larger issue for us than the chemical-weapons issue, that the threat against Israel, that a nuclear Iran poses, is much closer to our core interests,” he said.

Look at Iran and their re-aligning of which monies are accepted for their oil. Then look at opium production in Afghanistan prior to 2001 and what it is now.

posted on Sep, 16 2013 @ 08:11 AM
link
He is merely being pressured by Israel to keep up the rhetoric against Iran. For those who have been following world events since 2001, we can see where all roads are leading.

Syria is just another ME country that needs to be brought on side to allow an U.S led attack on Iran.

People point to Russia and China, and question the purpose of the U.N as they appear to veto many proposals that would affect treatment of Syria and Iran. Yet, the U.S always seem to use their veto when resolutions are proposed regarding Palestine and Israel's treatment of them.


Its not a new red line, its the old red line with a fresh coat of red, I think Obama will need a ff attack on the Whitehouse to convince his fellow countrymen to move on Iran which could still prove difficult because Iran has always been the last on the list and the u.s troops are starting to question their orders. In securing the middle east they need Iran and one way or another they will get.

Why? Partly because of his legacy, or the legacy of a "progressive" (facist/dictatorial/socialist with communist leaning) presidency.

How to fix a presidential legacy:

World wide problem to fix: imbalance between the male female ratio,
too many males and not enough females:
(due to sex selection abortion worldwide and female infanticide world wide)
FIX: you can promote homosexuality and/or
kill off the males who only want heterosexual relations: WAR

Obama and the liberals basically have one option to fix all of these problems in one fell swoop and to gain permanent control because of the control over healthcare, education, and all forms of communication.


Seriously. I'm wondering if he's trying to cover all his ineptitude and scandals with a war. His legacy would be better off without all the attention on the crap he's pulled at home. Or maybe it's so he can help his Muslim Brotherhood buddies. Or maybe he just wants to bring America down. Whatever it is .. he is hell bent on doing it.

posted on Sep, 16 2013 @ 09:21 AM
link
wow
what a shocker
Think it's time Obama be reminded of the red lines he's crossed esp when supporting the likes of Al-Qaeda
and drone bombing innocents.
www.redflagnews.com...
directorblue.blogspot.ca...
edit on 16-9-2013 by all2human because: (no reason given)

posted on Sep, 16 2013 @ 09:23 AM
link
A far larger issue then killing children? So the killing of the kids wasn't quite as important to him as Iran developing nuclear weapons that they claim are for energy purposes? Last week the most horrid thing in the world were chemical weapons. What about North Korea? Do they get the same red line? What about Fukushima - does that deserve a word?

posted on Sep, 16 2013 @ 09:46 AM
link
I'd say, generally speaking here? If Obama can't handle his own statements, lines and threats to a lesser nation like Syria? The 70+ Million in a nation 1/3rd the land mass of the United States itself (roughly) is FAR too much for him. He'd be so much better looking INWARD to the disaster right here at home ...not a disaster on the opposite side of the world most Americans (Who hired him) couldn't possibly care less about ...when paying the bills is a challenge beyond many.

"It's the Economy stupid!". George Bush Sr. lost a second term over that lack of understanding. Why don't these people ever learn from OTHER's mistakes? They feel a requirement to repeat each and every one of them pesonally just to make sure it was realllly a mistake?


Lyrics from a song i sometimes hear come to mind: "Here I go again on my own. Going down the only road i'we ever known..."


I mentioned before that it seems as though the "Command In Chief" is personally motivated to find someone's @$$ to kick.

The other day I read an article that said "Obama is shifting his attention away from Syria". The second I read that I began to wonder who would be next.

However, the way we keep going around trying to beat people up is sure to come back and bite US square on the @$$


I think it just proves the President is just a puppet.

Why would they delibratly make such huge mistakes knowing it would backfire with the public?

There must be some group that doesnt care what the public think that pull the strings of all the top politicans like puppets. It the only way that expains what ever politicans get voted in at the top its doesnt change a dam thing its all rigged. I mean how many Presidents and other high flying members of office have come from humble working class backgrounds? How many went to state schools? And the few that are? How easy would it be for the NSA to dig up dirt on someone to keep them under control?

buster2010
Obama didn't draw any line on Iran. The moron who wrote the article drew the line for him.

As I stated, Obama didn't say 'red line'. But his statement did indeed draw a red line.
Iran can not be nuclear. Israel can not be threatened. And Obama says both are
in the US interests and would bring down a 'strike' like was planned for Syria. 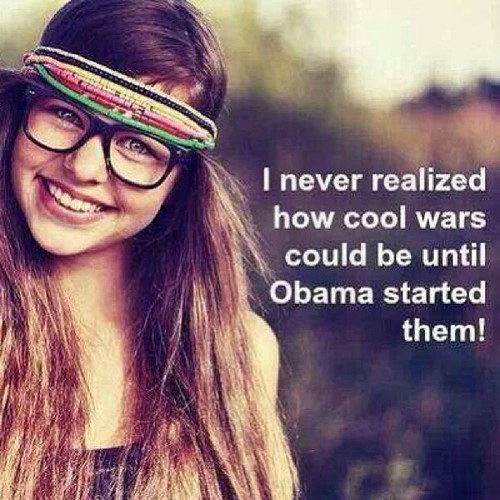 I'm getting damned tired of this.

OH man .... that's so accurate. If this was Bush43 bringing us to the brink of WWIII ... and then immediately stepping up the rhetoric against another country when that attempt failed ... the same yutz's defending Obama on all this would be jumping up and down having a hissy fit that a big bad (R) was daring to bring us to the brink ...


How about this little gem. Remember 5 years ago?