Workplace violence or terror related. In America it means the same thing now but just to clarify. Multiple injuries are reported and the police confirm at least one is shot but condition is not available.


The U.S. Navy has confirmed that there is an active shooter on the grounds of the Washington Navy Yard in Southeast.

D.C. Police say they have received reports that multiple people have been shot.

With all of the tensions in the US and abroad this could have broader applications or maybe it is a domestic issue. Lets hope everyone is ok and no deaths .
edit on 16-9-2013 by matafuchs because: (no reason given)


It's just breaking now.....trying to figure out what's going on.....they did say gunman still on the loose...

posted on Sep, 16 2013 @ 08:19 AM
link
I just switched on the news and seen this horrific incident unfolding. I would urge everyone to refrain from arguing about conspiracy theories and gun control. As far as we know it is an active shooter who is still on the loose. Emergency services appear to be on scene in large numbers so let's hope these brave men and women can bring a safe conclusion to this incident for all involved. Two victims reported now.


Why should people refrain from sharing views as they happen? We're all adults here. Im sure we'll manage to disregard or consider information as people share it.

I know some of it might not amount to anything. But i have no problem censoring my own impressions of info i recieve without asking others to do it for me.

posted on Sep, 16 2013 @ 08:25 AM
link
Now reports of an officer down on the third floor of a building presumably within the yard. I really hope this is the end of the shooting and injuries. Now reports of a gunman on the fourth floor. This is awful to watch and listen to. Best wishes to all emergency services on scene and the victims.

posted on Sep, 16 2013 @ 08:25 AM
link
If the TSA was handling security we wouldnt have this would we..
The airlines have never been safer 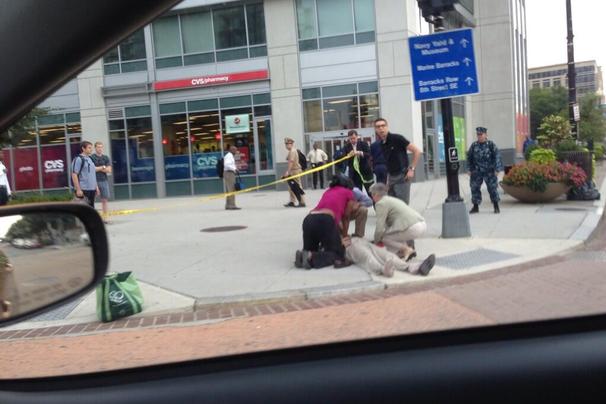 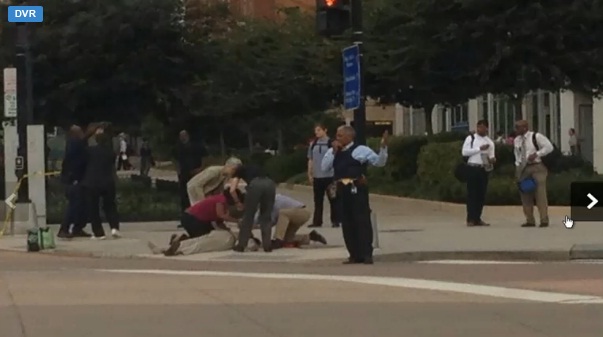 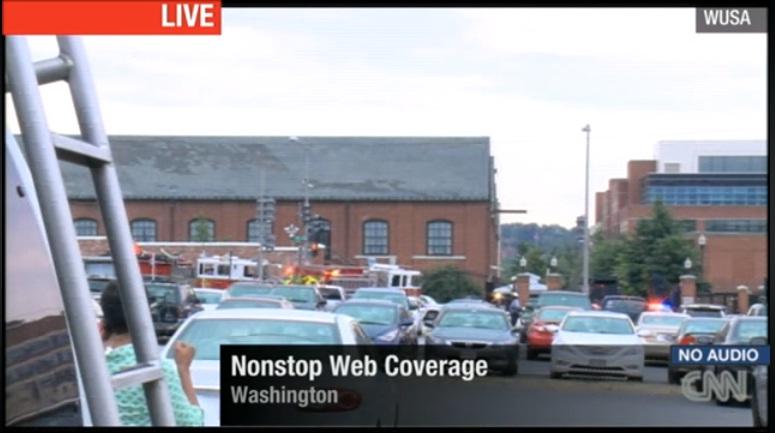 WASHINGTON (WUSA9) -- Police say four people and one officer have been shot at the Washington Navy Yard on Monday morning. Police are looking for the shooter.

The U.S. Navy also tweeted officials are looking for a gunman and that there were at least three shots fired inside the Naval Sea Systems Command headquarters. The Navy says approximately 3,000 people work there.

A police official says they received the report at 8:26 a.m. Monday.

Social media reporting a shooter spotted in a fourth floor window, according to WUSA.

Suspect description: Adult black male, medium complexion, bald, approx. 6' tall. Source says gunman had three weapons, a hand gun, a double barrel shot gun and an AR-15. Lone gunman has barricaded himself in a room according to the Washington Post.

One victim possibly evacuated by helicopter in a basket from the roof.

Possibly related: Flights at Reagan National being held on the ground.

edit on 16-9-2013 by DancedWithWolves because: Updated photos and information


Just watching it now on Skynews!

Wonder what this about??

A nutter or something else??

Just head that there are Fatalities!
edit on 16-9-2013 by TruthxIsxInxThexMist because: (no reason given)

posted on Sep, 16 2013 @ 08:31 AM
link
Latest reports is that the shooter has a rifle(possibly a shotgun) and confirmation of an officer shot.

There are also new reports of gunshots since the originals around 8:20. The Navys cafeteria is in the building in question so hopefully it was not in there or it may be worse than originally reported.


Yeah Sky News seem to be showing the coverage from Fox News so i assume its live there too.


I didn't actually hear anything about 'Syria' but TBH, I havn't been listening that closely as I'm on ATS!!

What I do know though is that whoever it is, he/she won't be getting out alive, not with all he Police, Snipers and Swat teams around...
edit on 16-9-2013 by TruthxIsxInxThexMist because: (no reason given)

posted on Sep, 16 2013 @ 08:41 AM
link
Two officers confirmed shot. 7 total shot now reported. LE has also told everyone that there is a two block hot zone and all people and media are being moved. Shots are also still being reported.
edit on 16-9-2013 by matafuchs because: (no reason given)


Yeah Sky News seen to be showing the coverage from Fox News so i assume its live their too.


Yes, the media is obviously following a script.

And isn't it odd one of the first posters here sternly warned us not to jump to conclusions but obediently follow the official story...


How could you think such a thing? Seriously. Well done.


Because that's not what you're supposed to be looking at. HERE. LOOK HERE! Not over there. HERE.
edit on 9/16/2013 by Klassified because: eta


Sad part is that flooding does not help gun control but I am sure you will hear Al Gore talking about it in the next 6 months. Very sad state of affairs.


Live feed transmission is talking about a mass casualty setup being created to deal with wounded in triage. Remember that they first reported 2-3 shot at Sandy Hook in the first half hour also. Really hoping this is not as bad as it can be.

posted on Sep, 16 2013 @ 08:58 AM
link
If this is a diversionary type event, it certainly is working well now, isn't it?.
Is that Washington D.C. where this is happening?, shipyard along the water maybe?. Sure is a lot of activity on the scanner for it to be only one supposed shooter...


FYI, there's another thread running on this.. www.abovetopsecret.com...