Of course this wild statement comes after he did in fact draw the Red Line over a year ago !!

He's buttering up the scapegoats and fallguys just in case this whole Syria 'policy' becomes yet another boondoggle like Libya and Egypt to name only two.


President Barack Obama on Wednesday declared the world’s credibility “is on the line” when it comes to punishing Syrian President Bashar Assad for his regime’s purported use of chemical weapons.

Speaking at a press conference in Stockholm, Sweden, ahead of a global economic summit in Russia where he will seek to rally support for a U.S. military strike against Syria, Obama said the “red line” he set against a year ago against Syria’s use of chemical weapons isn’t his, but an international standard.


"We have been very clear to the Assad regime, but also to other players on the ground, that a red line for us is we start seeing a whole bunch of chemical weapons moving around or being utilized," the president said. "That would change my calculus. That would change my equation."

Next he will be telling Assad that "You Didn't Build That" 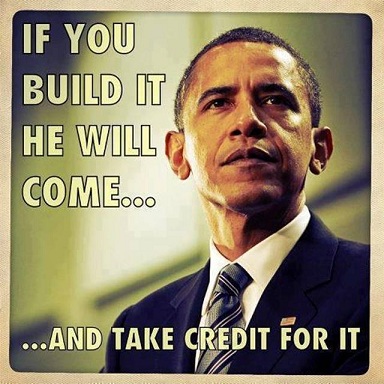 Obama's 'Credibility' IS ALWAYS on the Line ..

add to that please.


edit on Wed Sep 4 2013 by DontTreadOnMe because: corrected link