Voting is for show. Elections are a fraud.

posted on Aug, 21 2013 @ 05:55 PM
link
When a man places a ballot, in the ballot box, he believes his interests to be represented. To be held in consideration, as with the concerns with his fellow man.

But what if the ballots are discarded? What if the whole process is a lie, and they've already picked who's going to win?

I got to thinking, about why people keep voting in the same corrupt people. Then, I realized that they don't. Sure, people are stupid, but are they that stupid?

Anyone remember the Electoral College, back in 2000? When Al Gore won with 48.4 of the vote, and Bush had 47.9? Well, it didn't work out, even though the numbers were in his favor. They already had decided who would be president. And they had no reason to consider the whims of the American public.


The U.S. has a legacy of doing that sort of thing to other countries like Chile, Iran, etcetera. It should be no surprise it would happen here on the homefront.

Corruption, pure and simple, rules the country. The dollar is the loudest ballot of them all, and a rich man can cast as many of them as he likes in an election.
edit on 21-8-2013 by Grifter42 because: Accidentally pressed enter before I filled out the post.

posted on Aug, 21 2013 @ 05:59 PM
link
Do you also believe that the pollsters (both telephone and electronic) are in on the "election fraud" as well because they tend to get it right 8 out of 10 times and statistical analysts such as Nate Silver are able to compile and analyze polling information to determine the electoral outcomes with extremely high accuracy (99 out of 100 states correctly predicted by Nate Silver over the past 2 election cycles using polling information).


Most people are already bought and sold.


"The difference between and democracy and a dictatorship is that in a democracy you vote first and take orders later; in a dictatorship you don't have to waste your time voting" ......Charles Bukowski

Insanity: Doing the same thing over and over and expecting different results. 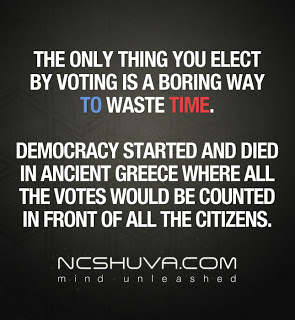 Congratulations on waking up

posted on Aug, 21 2013 @ 06:25 PM
link
Easily manipulated masses is your political problem. Vote manipulation...hell, why even bother worrying about that when you got people voting based on hearsay and sound bites?

Get the majority interested in politics past the sound bites, and your system will correct itself. Continue with the vast majority not caring one iota about politics until a month prior to voting, and you get what you get.


Voting is for show. Elections are a fraud.

This country's on death row. See the angry mob.

Smartphones in their hands, Nikes on their feet,

Grow up silly girly littles; life is not a bag of skittles.

posted on Aug, 21 2013 @ 06:56 PM
link
You DO realize you can BE a poll watcher and see what happens to it all personally, right? I've known a couple of them here where I live and thought about doing it last year myself.

If fraud is happening, and it may well be, then look to the national level It's not happening at the local level when I can ask the people who would have been doing it or watched it done.

On the other hand..I'd also note the ballot box has an electronic scanner. So, the paper we still use in Missouri still converts to digital the moment we're done. The difference between here and elsewhere is simply that we still have paper to compare. Unlike, say Florida, where %'s ranged right into the "not even physically possible" in the last election. Technical difficulties, they claimed. mmm.. Yeah... Like all those technical difficulties for the Kennedy election, I'm sure. Happens all the time for that national stuff.

Now, the national big money people couldn't care 2 hoots about who your mayor is, city council are or who serves on your city school board. If you don't vote, you're basically handing those decisions to people you don't know and hoping they are the sort you'd agree with. Like I said, on the local level? If you think it's not right? Go work the poll personally and MAKE it right. It really IS that easy.
edit on 21-8-2013 by wrabbit2000 because: (no reason given)


Well our country IS a Representative Democracy... not a true Democracy.... and unfortunately, paper with numbers on it finds more representation then people

Yes the Electoral College votes the President in...

Your vote towards a President WILL count if you choose to vote for a 3rd party candidate.... Because if any 3rd party Candidate receives 5% of the popular vote, their party's platform will be allowed to attend in the National Debates....

Also your vote does count towards local officials... ie: Senate / Representatives / Governor / etc... but no one really focuses on that because all the media can talk about is who to vote for president


Been waiting for years for people to realise this - it's always been rigged - just a show case so the sheep think they have some say. Yeah right!

posted on Aug, 22 2013 @ 02:03 AM
link
Glad you realized this OP.Most people refuse to acknowledge this they would rather just blindly cheer their team on regardless of what either of our self proclaimed "representatives" say or do.

Originally posted by Strewth
But Hey...........its a 2 party system so if you vote, you have to vote for one of them.

You can actually push the tolerance of a population more if you use a two-party system. That is why they use it.

If it were only a one-party system, and you push the people too far, they will feel trapped and revolt. With the two-party system, people won't revolt. They will simply vote in your other team.


You haven o idea how the US elections work do you?

So much for 'democracy'.


You're preaching to the choir.
The electoral college system is a betrayal of the very foundation of democracy.

Originally posted by wrabbit2000
You DO realize you can BE a poll watcher and see what happens to it all personally, right? I've known a couple of them here where I live and thought about doing it last year myself.

If fraud is happening, and it may well be, then look to the national level It's not happening at the local level when I can ask the people who would have been doing it or watched it done.

Ya... no, even locally people cheat the system, proof, look up Ron Paul fraud or something, would give you a clear indication on what actually happens.. Then again dont take my word for it... There is still the other 2 idiots to vote for..


Well, then be the change you wish for and become involved to do something about the issues. At least on the local level. The fact so few even bother trying, almost makes what 'they' do something we can't call wrong anymore. After all, we are openly allowing it, almost to the point of asking for it. Making no choice or taking no action is making a very definite choice in itself. It always has.


Actually this is wrong also, there have been wide reports where RP supporters were turned away, told they weren't allowed to vote or just their vote didn't even matter...

I can care less really, I learned in 2000 and 2004 that our system is bs.. But hey illusions are great, you should go see David Copperfield or David Blane or something.. At least you get your moneys worth..