Russia says it will not allow Syria no-fly zones

(Reuters) - Russia, a veto-wielding member of the U.N. Security Council, will not permit no-fly zones to be imposed over Syria, Foreign Ministry spokesman Alexander Lukashevich said on Monday.

"I think we fundamentally will not allow this scenario," Lukashevich told a news briefing, adding that calls for a no-fly zone showed disrespect for international law.

Well FINALLY Russia has let the US know where their "red line" is. This is great news for the people of Syria. And apparently Putin and Obama have agreed to force both sides to the table.

Russian President Vladimir Putin and US President Barack Obama have agreed to push the sides of the ongoing Syrian conflict to the negotiating table in Geneva. The leaders made the pledge after a 2 hour meeting at the G8 summit.

“We have agreed to push the sides of the Syrian conflict to come to the negotiating table at the international Geneva conference,” Putin said.

I am thrilled. Was real worried the last few days.

I say good on Russia. Good to have them veto any UN resolution that would attempt to install a no-fly zone over Syria.

We have no business being there in the first place.

Russia were very annoyed (to put it mildly) when they were persuaded to allow the passing of the no-fly zone over Libya only to then discover that it was really just a excuse to bomb Gaddafi's forces.

In any case the Joint Chiefs of Staff is on record saying that a no-fly zone over Syria would be very difficult to establish and also kind of pointless because only 10% of casualties are as a result of air power.

Also everyone has known that Russia would use their veto power just nice of them to now actually admit as much but none is really calling for a No-fly zone .... yet.
edit on 17-6-2013 by OtherSideOfTheCoin because: (no reason given)

I HIGHLY doubt Russian Naval ships in the area will intercept US Naval ships or engaged US/NATO aircraft whom fly over Syria to destroy AA + Radar sites.

posted on Jun, 17 2013 @ 05:02 PM
link
Let me translate this for you people who do not understand diplomatic speak. If the UN votes for a no fly zone Russia will veto it. Of course NATO and Arab league could just do it on their own if the really want to. And Russia will be sure to send an official complaint. Russia could not do anything to stop it even if they really wanted to. Just like they can not stop the west from sending weapons to the rebels now that the embargo has been lifted. Anyone who thinks Russia will give up it cozy seat at the G8 and growing ties with the West and Isreal over a two bit dictator like Assad is fooling themselves. Syria is a place to sell weapons and the Russian will milk that until the very end but, they will rist nothing in doing so.

posted on Jun, 17 2013 @ 05:06 PM
link
Yes I support Russia 100% in what they are saying, they need to keep fools like America & UK & France in check, they all get involved in conflicts they never are able to end or resolve, but make matters worse.
I still feel as if Russia should really attack NATO though for damage we have done in the Middle East the last 10 years, it would teach NATO a lesson they need to learn.

posted on Jun, 17 2013 @ 05:15 PM
link
I support Russia in this as well. Something I never thought I would say, being as I began my military service during the end of the cold war.

I think this will show how little "control" the US has over their "side" of this conflict. Look for a lot of back peddling, double speak, and political tap dancing from the White House.

Lets hope this means either cooler heads are prevailing or realization to where this heads is settling in. Doesn't matter which, does it?

Is it because Russia fear a Qatar - Europe super pipeline?

Russia getting really desperate to keep its puppet in power now,

Just let the people of Syria have there revolution and kick out the ruling minority Mr Putin, over 100.000 Syria dead because of Russia's meddling's and flooding the country with advanced weapons

I doubt they will be listened to enough is enough its time someone threw the towel in
edit on 17-6-2013 by TritonTaranis because: (no reason given)


Just a little vid of the G8 conference today between Obama and Putin.


Think this shows quite the opposite,Russia is all in 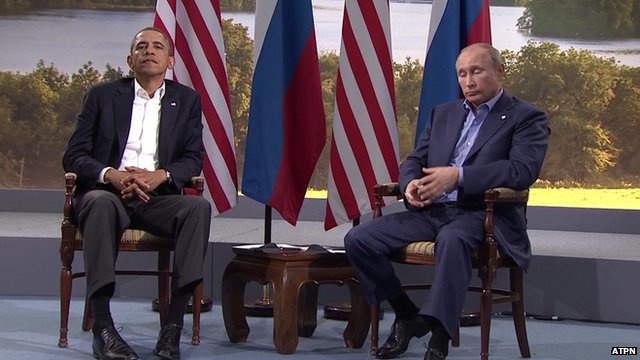 As to Russia, yes - they will veto any UN attempt at a no fly zone, but as to not being able to do anything. They are moving their only aircraft carrier to their naval base in Syria and nuclear subs when they are able. Will they attempt to shoot down America fighter jets, not likely - but you can be sure things are going to get VERY stressful if America ignores Russia about this.


Here is a potential conversation between the two:

Obama: So we are planning a nofly zone over syria, and are planning a joint effort with the EU and Japan to devalue our currency in order to better support the PIIGS and Japan, in addition to military intervention in Iran after they committ Republican Guar....
Putin: No
Obama: No to what?
Putin: All.
Obama: That is unreasonable, surely there is some comm...
Putin: Tchh Tchh Tchh.... No.

Putin is the boss! 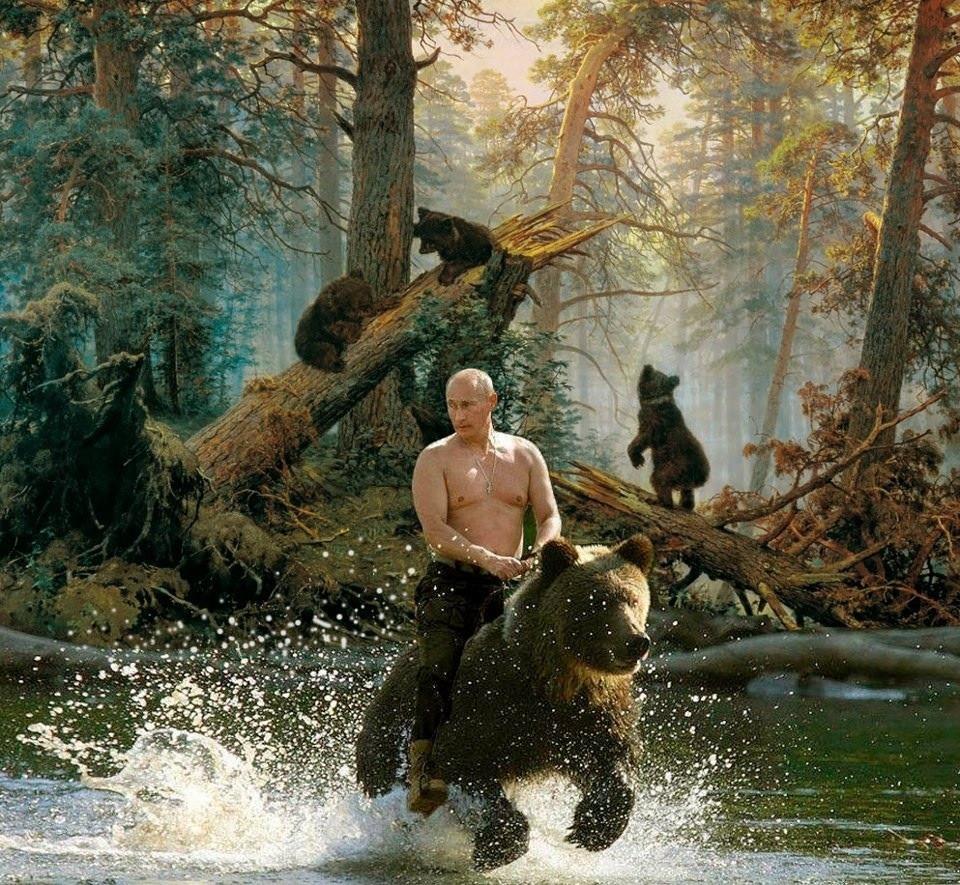 WASHINGTON — The Pentagon said on Monday it will spend $572 million to buy 30 Russian-built military helicopters that will be used by Afghan security forces. Follow @NBCNewsWorld The Mi-17 helicopters will be used by Afghanistan's National Security Forces Special Mission Wing, which supports counter-terrorism, counter-narcotics and special operations missions. The contract with Rosoboronexport, the Russian arms company, covers spare parts, test equipment and engineering support. The Pentagon said the work would be performed in Russia. It is expected to be completed by the end of 2014. A year ago, the Defense Department purchased a dozen of the Mi-17 aircraft from Rosoboronexport for $217.7 million, as part of a larger contract originating in 2011. Copyright 2013 Thomson Reuters. Click for restrictions.

So why does this mean it has been decided? The US did the same thing before Libya. Except France bribed the US with a aircraft deal worth billions.

Originally posted by JBA2848
reply to post by santjime


This war was started by the French. The strings are being pulled from global corporations to make the US and other NATO countries follow. Such as the bribe from the French to the US in fighter jets. Who profits from that transaction. The military industrial complex ran by global corporations not the US. Who profits from taking over the central bank in Lybia. Global banks not the US. Why do they have a hard time saying why were there. Because the US has no gain in any fashion. The companies, the banks, are all global that will profit in some way. NWO you follow the orders from the global cartels no matter what your view is on the matter. And the global cartels own the people under the president. Why would Geithner be invo;ved in a fighter jet deal in Brazil? Because it was a deal that came from the global banking cartels. Don't forget where he came from.
A article about Geithner.
abcnews.go.com...

One of the U.S. companies with a potentially huge interest in those discussions is Boeing Co., which has been trying to convince Brazil to buy 36 of its F/A-18 Super Hornets – made mostly in St. Louis – for Brazil’s long-delayed F-X2 fighter aircraft program.

But Rousseff re-opened the bidding for the F-X2 program after she was elected last fall as Brazil’s first female president. And she reportedly told U.S. Treasury Secretary Timothy Geithner recently that she regards the F/A-18 Super Hornet as the best fighter aircraft among the three finalists, which include France’s Rafale and an aircraft manufactured by Sweden’s Saab.

But there is a major catch to the potential deal, which media reports have said could amount to $6 billion. Brazil wants the U.S. government to authorize transfers of some proprietary technology that would eventually help Brazil develop its defense industry. According to some reports, the Brazilians also want to sell some of their own military transport aircraft to the U.S. military.


Originally posted by Alternative4u
Yes I support Russia 100% in what they are saying, they need to keep fools like America & UK & France in check, they all get involved in conflicts they never are able to end or resolve, but make matters worse.
I still feel as if Russia should really attack NATO though for damage we have done in the Middle East the last 10 years, it would teach NATO a lesson they need to learn.

posted on Jun, 17 2013 @ 10:29 PM
link
Why is Russia interfering in they Syrian Civil war? Is anybody complaining about that? They are no different than USA.

Originally posted by princeofpeace
Why is Russia interfering in they Syrian Civil war? Is anybody complaining about that? They are no different than USA.


You are exactly right.

The Russians supporting the Assad regime is no different than the US supporting the rebels when it comes down to it. Russia had been a traditional ally to the Syrians, but they cannot claim to have any cleaner hands than the US as far as arming people to kill one another.

It takes two to tango. Those who look to the Russians as some great saviors are a bit blinded to the realities of the world methinks.


Yes but there IS a big difference, one stands on the side of the law and the other doesn't.
Many people are not aware that Russia and Syria have a standing mutual defence treaty..
See reference:
The treaty of amity and cooperation, containing 15 articles and signed between Syria and Russia on October 8,1980 just after Camp David Treaty that has been signed on March 26, 1979 is the highest level document which has been signed between Russia and Syria. According to the article 5 of said treaty the parties shall promptly contact each other.in case the peace and security of one of the parties has been threatened for the purpose of eliminating that threat and re-establish the peace. that treaty was a guarantee treaty for Syria. According to the secret protocol of the treaty Russia guaranteed to help Syria with all its power in case of an attack by Israel.
www.academia.edu...
edit on 18-6-2013 by all2human because: (no reason given)