Turkey riot about to go off tap! Live from RT.

Taksim Square, the heart of Istanbul.

Turkish police have taken in custody several dozen lawyers for joining the ongoing protests. The arrests in Istanbul come as police launched a crackdown on protesters in the city’s Taksim Square.

The lawyers were seized at the Caglayan Courthouse on Tuesday by troops of the special forces unit, reports Hürriyet Daily News.

Hey... when they're done arresting lawyers over there..do ya think we could contract them to....? Nawww... I'm sure they have much too much to do for a little friendly assistance to an ally in need, huh? (grin)

Seriously though, I'm just trying to find a little humor in a situation that has precious little to it. Turkey is a scary place to consider falling apart like Egypt has. It's much bigger, MUCH better armed and far more fractured for segments of society than Egypt.

The worst part tho....If Turkey were to somehow fall to those against NATO/U.S. Forces? Among other things....Turkey produces F-16 fighter aircraft domestically. That means they don't just procure and use classified material, they literally manufacture and produce it. Complete with hacks to the IFF systems of said aircraft. Imagine an aerial battle where IFF becomes totally useless because suddenly, everyone is squawking the wrong things and no one knows who is who outside visual identification at the close distances that requires.

Oh yes.. I do hope Turkey gets all this under control. By citizens ending this or the State. Whichever. It's a bad place to see fall into anarchy.

I heard on the news this morning that the government said that their patience was wearing thin.

They are attempting a crackdown now. It will be something to watch, see how strong the will of the people is in Turkey. I wish them well.

posted on Jun, 11 2013 @ 07:59 AM
link
I cannot imagine being in a country with such chaos and confusion. It would be really terrible to be a person got in the middle of this madness. I really feel for the protesters.

posted on Jun, 11 2013 @ 08:38 AM
link
I'd say it's the people who are already doing the 'crackdown', the governemnt should step down peacefully if the people demand it.

A lesson's in there for ALL governments who abuse their powers on LOAN from their people.


I'd say it's the people who are already doing the 'crackdown'


In reality, it is the people.
Good observation.

posted on Jun, 11 2013 @ 09:20 AM
link
If they arrested DEFENCE LAWYERS for the protestors i think its certainly getting to the boiling point.
The government doesnt have a handle on it and they are becomming more desperate to restore a normalcy which the people refuse to return to.This is reaching a crisis/chaos point.
More detail you wrascally Wrabbit!


Link returns 404 error
However if I may post some thoughts:
Turkey caused Israel some grief with the aid flotilla to Gaza...paid off the IMF loans...government wants to hack down some trees in a park and suddenly the whole country is in uprising...prime minister claims outsiders the cause... cracks down on protesters...people more important than trees...
How does this go? oh yea next report of atrocities... singers tongue pulled out or women harmed and talk of Islamic law going too far...we must defend the freedom fighters...embargo... no fly zone... hundreds of thousands dead...country bombed back to stone age... raise taxes in the US to rebuild... massive IMF loans..
IS That about it? is that the standard M.O.? wonder what page it is in the world death manual?

Should I feel bad about seeing the real deal?
found live video, after trying many that were not running: newsblogged.com... ra-istanbul-turkey
edit on 11-6-2013 by donlashway because: video link added

is this link the Turkey protests?

posted on Jun, 11 2013 @ 04:10 PM
link
Looks like shooting going on, on the Reuters livestream. Water cannons in a largely empty spot where there is a lot of smoke, but a minute ago I saw what looked like tracers being fired.

Another view shows a front end loader pushing debris back off the pavement.

I did see one vehicle on fire, but the "tracers" were odd looking, more like spurts of sparks, not really tracers. There was a lot of smoke (tear gas?) around.

Now they are showing a gathering of the police who seem to be resting. One of them was clearly carrying a fat barreled rifle (tear gas launcher?).

Now it's a scene of parked water cannon vehicles with about forty or so police standing and sitting in front of them, resting.

There is another view which shows a lot of dimly lit protesters on an elevated street or platform of some kind in the backround. You can see that they are bouncing up and down as if chanting or shouting something.

A column of police is climbing up to them by an alley and away to the right of the police you can see banners and tear gas canisters flying through the air.

The police seem to be faced off on a climbing pathway against a large group of protesters at the top in a side street. You can see the police helmets on the lower approach to the protesters.

They are shooting more tear gas. The cannisters explode with an orange flash at night. It looks like they want to move these people away from the area.

It is very bad. There is a lot of tear gas among the protesters now.

It looks like the police have forced a large group of protesters out of that area with tear gas. They have moved up into the side street now and are moving along it, with no opposition.

The camera scene changed to a panorama of a large open space largely clear of people. They followed a water cannon vehicle for a minute or two but it was just moving into another location, not really doing anything.

There is a good panorama now showing mostly emergency vehicles in the backround with clouds of smoke (tear gas?) floating by.
edit on 11-6-2013 by ipsedixit because: (no reason given)

posted on Jun, 11 2013 @ 04:56 PM
link
The Reuters live stream is focused on Taxim Square and surroundings. The square is largely cleared of everything but emergency vehicles like water cannons and police vehicles and fire vehicles. They are clearing debris from the area, including what looked like the hood of a wrecked car.

This was the scene earlier. 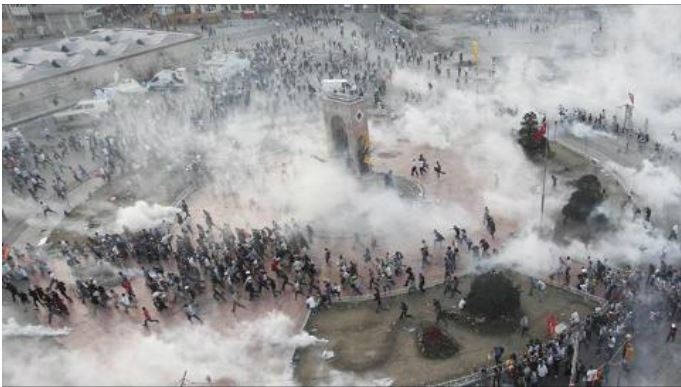 posted on Jun, 11 2013 @ 05:00 PM
link
On the Reuters livestream two protesters are behind some object and being shot at with a water cannon. They stand up with their arms raised to surrender but every time they do the water cannon shoots at them again and they duck down.

It is funny. So far.

A lot of the cops are resting near water cannons. 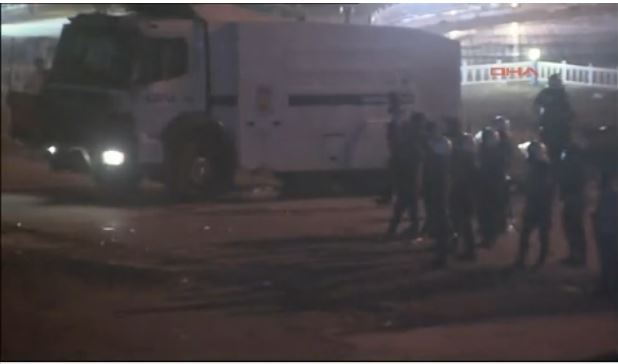 posted on Jun, 11 2013 @ 05:14 PM
link
The water cannon foreground right (red tail lights) was the one shooting at the protesters behind the rectangular object left. 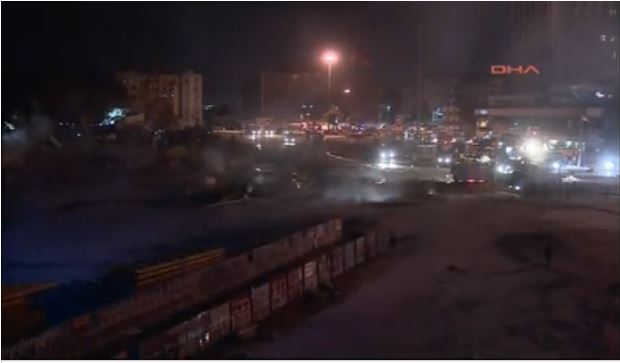 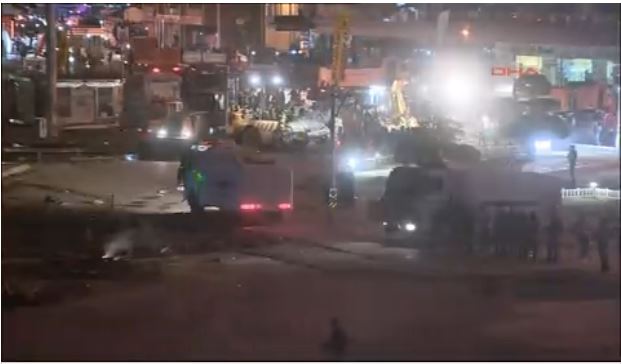 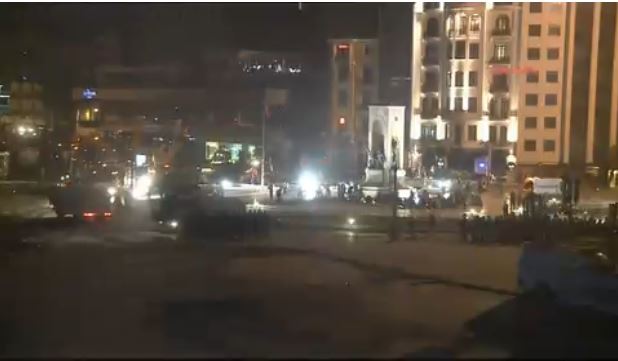 The camera has changed again to the scene of the elevated protesters and the police on the level below. The protesters are there again and I can't tell if they are replaying an earlier scene or whether the protesters have resurged. 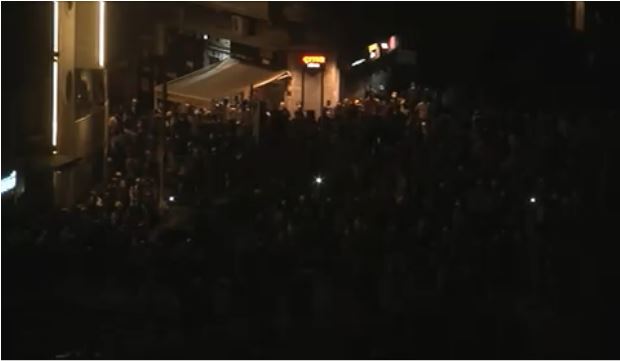 If this is live there are a lot of detonations. I don't think this thing is over yet. It seems to have moved into the side streets.

posted on Jun, 11 2013 @ 05:51 PM
link
A lot of police and two water cannons are facing a threat from the protesters. This appears to be an attempt at a counter attack by the protesters but the police are responding immediately. 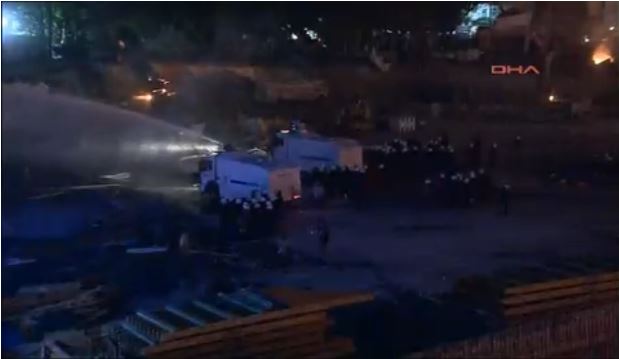 In this scene water cannons are shooting at protesters, front end loader is pushing debris out of the way and police are shooting tear gas cannisters . . . all going on at once. Plus fire engine standing by.

It's busy in Taxim Square tonight. 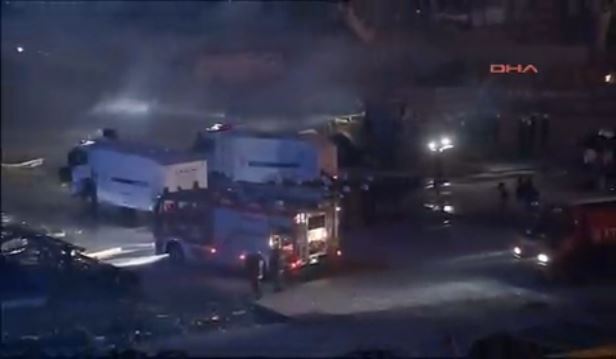 posted on Jun, 11 2013 @ 06:02 PM
link
This is a scene where the protesters have built a bonfire. There are many detonations in the backround, some of them very loud. There is a lot of shouting and from time to time protesters near the fire can be seen throwing things at someone off camera. 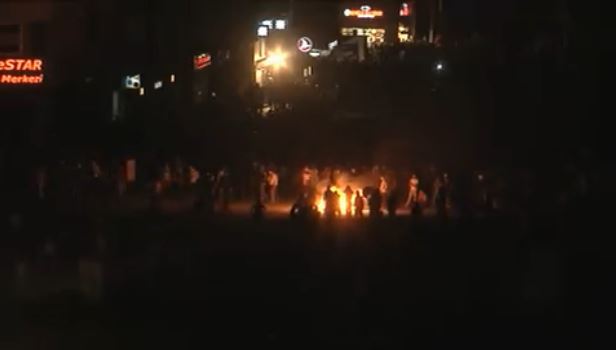 At the right side of this picture there is a faint diagonal light. That is a laser, green, which is much brighter than it appears in the screen grab from the Reuters livestream. Someone is training it around the scene. Undoubtedly these are being used to annoy the drivers of water cannons or other police vehicles. 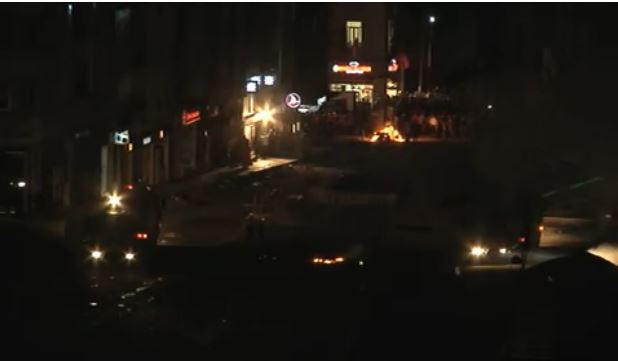 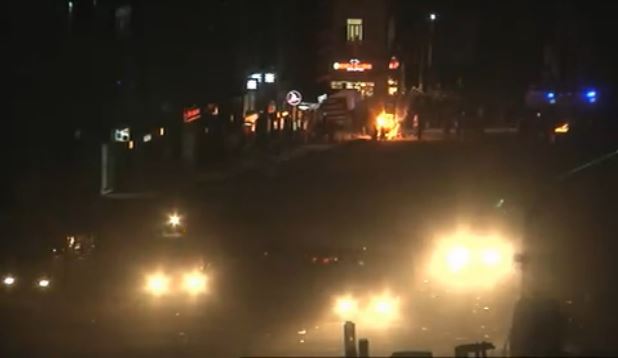 Even the police are gathered around fires. 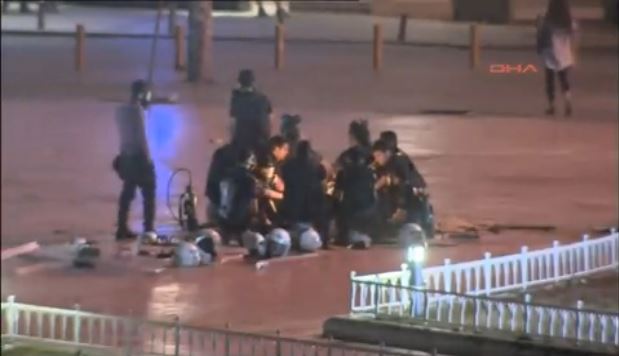 The protesters just let loose a barrage of firecrackers and laser beams at the police in this area. 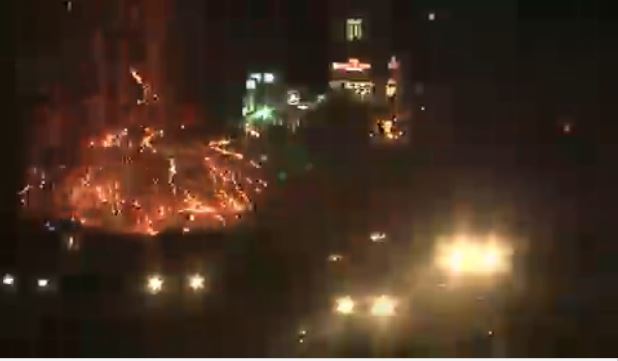 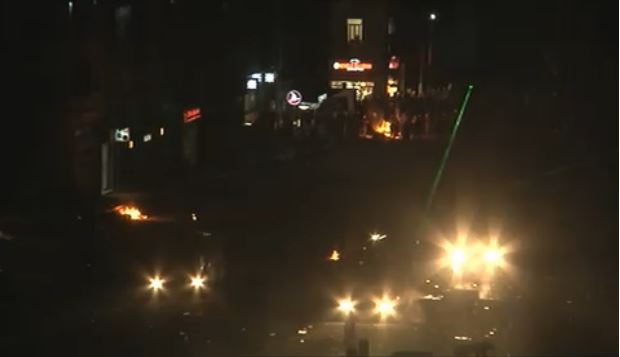 posted on Jun, 11 2013 @ 06:37 PM
link
The Reuters audio keeps going out but it is clear that they are still detonating large amounts of tear gas canisters. 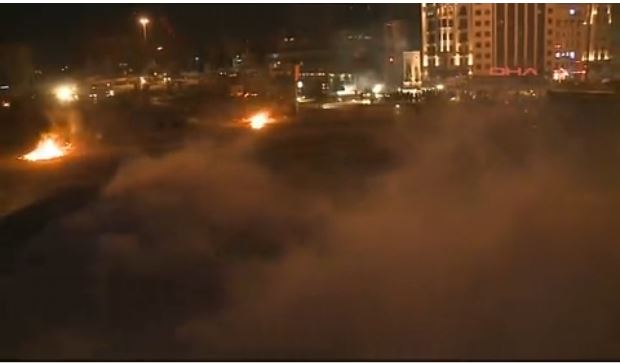 The police officers, foreground, just retreated to this position to escape a large and thick cloud of tear gas. Probably an unfavorable shift of wind rather than a protester "return of serve". 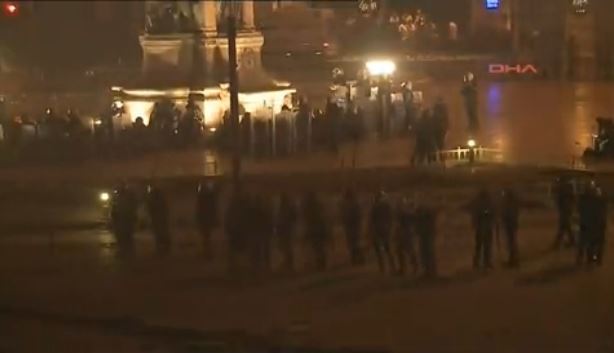 it looks like the police are going to be in the square all night to prevent a reoccupation by protesters. 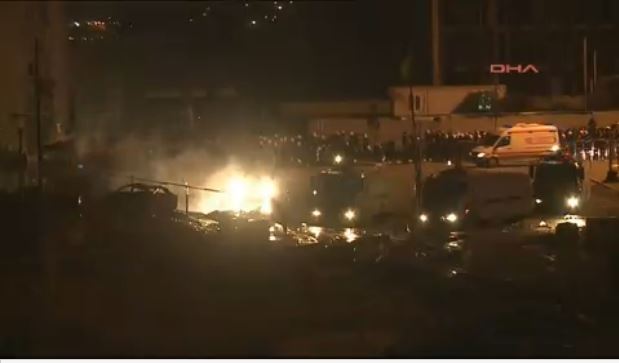 Protesters are in control on this side street where they have built bonfires. The hardcore is not going home. 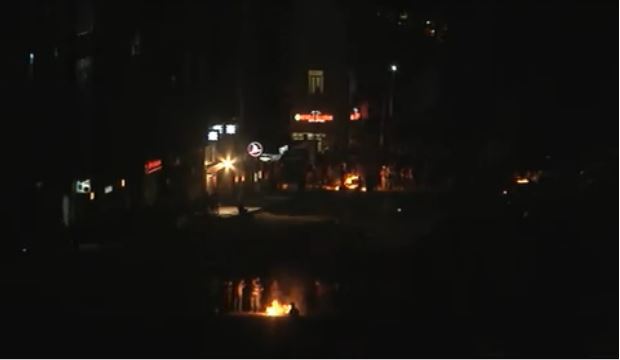 The fire in the background has become an oil fire billowing large clouds of black smoke.

This area was just the target of several tear gas canisters. 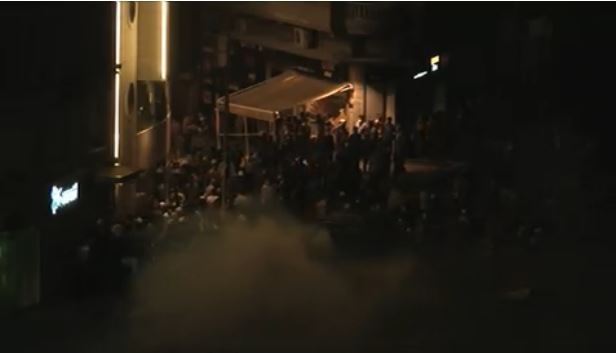 But people are holding their ground. It's possible that the wind is blowing the gas back at the police, hence the earlier retreat I noticed by a line of policemen.

Livestream appears to be expecting something dramatic to happen here. They are keeping the camera on this spot for a few minutes. There was a big police push through here earlier but the people seem to have returned to the spot.

I just missed getting a screen grab of a policeman being shot at with a green laser, the laser light glittering in his visor as he returned fire with a tear gas canister.

Imagine, me and Reuters sharing the Pulitzer. Now it'll be just them. It was a great shot. Right out of Star Wars. 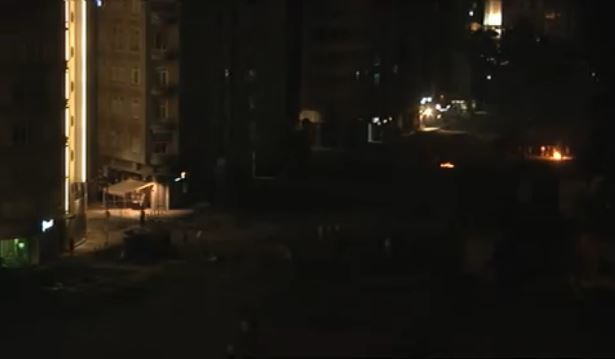 Maybe that is it for tonight.