Scientists Make Bug-Eye Camera: Will Next-Gen Drones Be Like ... Insects?

posted on May, 1 2013 @ 03:03 PM
link
OK, it's a somewhat difficult topic, I admit: technological progress can be for the good (medicine, security etc.) and for the bad (eg. total surveillance).

But think drones! I can't help but imagine that one of these days we won't even recognize them anymore, because they'll be too small ... and maybe they'll look like ordinary insects?! It's just a little bit frightning, I think!!

At least that's what came to my mind when reading this headline today:

A digital camera that functions like an insect's compound eye is reported in the journal Nature this week. It comprises an array of 180 small lenses, which, along with their associated electronics, are stretched across a curved mounting.

The prototype currently has few pixels, so its images are low-resolution. But the device displays an immense depth of field, and a very wide-angle view that avoids the distortion seen in standard camera lenses (...) 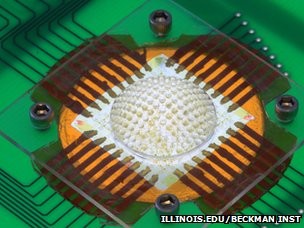 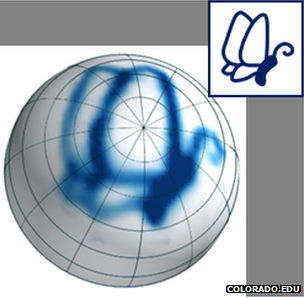 Combine that with this headline from a few days ago and we might well be on our way to make Orwell's worst nightmares come true:

Festo’s Robot Dragonfly an Awesome Mix of Prehistoric and Futuristic

German manufacturing firm Festo recently resurrected a Paleozoic dragonfly. No, we’re not talking de-extinction or synthetic biology—this baby’s robotic. But at 70 cm (27 in) by 48 cm (19 in), Festo’s BionicOpter robot dragonfly is a futuristic flying machine with more than a touch of the prehistoric in it. 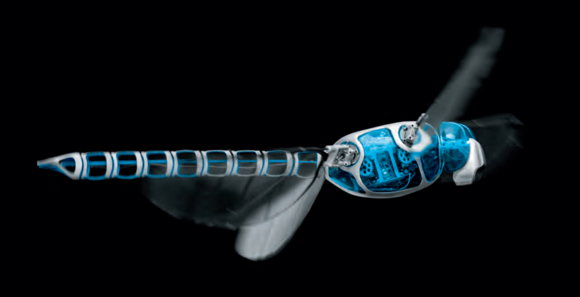 OK, perhaps I'm exaggerating a bit. Technology itself is neutral, no question. It is 'us' that uses it either for the good or the bad and the positive aspects are likely to outweigh the risks. But still: some of these developments do make me think about the potential downsides ... *sigh*


P.S.: Isn't it interesting how we keep imitating nature? I wonder what they'll come up with next?!

Um... did someone say 'Multi-Stage Micro Rockets'? No?

www.youtube.com...
Video number 5
edit on 1-5-2013 by retirednature because: insert video

Shaweet! That's all I really have to say lol. But, I do come with presents. I found this video on youtube not too long ago, and channel I suppose.


That's quite impressive as well. And it's all coming together ... one after another!

Festo's dragonfly focuses on highly complex flight characteristics while printed circuits allow for making stuff smaller/cheaper. Add in some more nano-engineering in future and everything becomes again much smaller. Then there's Moore's law and eventually, at some point, we may be heading for something like a 'technological singularity' (add big question mark) ...

I thought these two recent articles indicate once more what's possible. And I think it's good to have a discussion around the implications of all this, especially when it comes to surveillance, security and drones ...

posted on May, 1 2013 @ 06:20 PM
link
I just can't wait to be able to fly one of these things sitting behind a TV screen and using an Xbox controller. Cmon, 3 stage rockets, easy assembly, great vision, next a video feed and remote control and we're talkin'!

I want to make a sporting even where people have their own group of drones and you get to battle! The smaller the better! Once everything is developed, this would be awesome to watch in a giant glass dome. I think I've over thought this idea, all things considering.

Originally posted by retirednature
I just can't wait to be able to fly one of these things sitting behind a TV screen and using an Xbox controller. Cmon, 3 stage rockets, easy assembly, great vision, next a video feed and remote control and we're talkin'!

But I didn't mean that kind of armed RC drone controlled by some sergeants on a remote AFB!

The question I had in mind was rather: What would be the perfect spying device for reconnaissance purposes, that could enter your house without you even noticing it? Probably something resembling an insect, right? Either an engineered replica or a repurposed real one modified with some nano-circuits ... to some extent it's been done already.

Engineering challenge? Probably, but what about in 5 years, ten years? Just thinking out loud ...

Just came across another article that I thought might be worth posting in this context:

Scientists in the US have created a robot the size of a fly that is able to perform the agile manoeuvres of the ubiquitous insects. This "robo-fly", built from carbon fibre, weighs a fraction of a gram and has super-fast electronic "muscles" to power its wings. Its Harvard University developers say tiny robots like theirs may eventually be used in rescue operations. It could, for example, navigate through tiny spaces in collapsed buildings (...)

Remote controlled bees, cockroaches etc. and their mechanical counterparts! Could be used for reconnaissance in emergencies, behind enemy lines and ... well ... you can imagine!


now imagine it with a hypodermic stinger..

Like all technology, there will always attempts to use it for good, while others will use it for bad, and then argue over what is defined as good or bad.

Thus, it takes wise men to determine its use for the sake of society, so that such tech do not fall into the wrong hands. For example:-

Humans in shower will forever fear of any creepy crawly on the walls, regardless if male or female, or even sadly, children.
Boardroom meetings will never be the same, as each member will be staring on empty spaces of the walls to see if any 'insects' are in the room
etc,...

However, thankfully, what one man can create, so too can another, if one applies one's mind to it, the way CDC tries to find antidote to viruses.

It is only a matter of finding security measures against such devices should they fall into the wrong hands, and the solution is not as difficult as one thinks, for those devices have limitations and are not invulnerable - metallic surfaces, battery signitures and radio frequency transmissions - all that is within the reach of science for counter measures.

Thus, have no fear and never fear technology. What one makes, another can break, more so for those who simply buy such tech and thinks they can gain superiority over others. They will fail, for they had not anticipated mankind's propensity for innovation, espacially americans living in a free democratic society.

America's ability to innovate and develop new technologies is not the problem. Counter measures will certainly be available, but will they be in place to protect you and the public? It's a different discussion all together leading to questions like:

- are those devices already being used?
- who is (or will be) using them for what purpose?
- is privacy important to you or not?
(...)

Of course, all that technology needs to be developed. The faster, the better. Simply because the positive impacts are likely to outweigh the risks. But the above questions should be answered in time and beforehand IMHO. And some of them will have to translate into a set of laws that can actually be overseen. I'm not sure whether or not that will be the case, given the current (fast) rate of technological progress and the intransparent organisation of certain parties that may have access to such devices.

But perhaps it's inevitable to have some security gaps in that system and nothing bad will happen. Then my concerns are probably exaggerated and may be ignored!