There are a few things that do not add up, the first thing is this image that I have come across...


If this is accurate it raises massive questions!

Another thing that raises doubt in my mind is that the Boston Bomb Disposal unit were running drills on that day, drills being run on days when these major attacks happen seems to be a common occurrence, 9/11, 7/7 etc


and lastly another thing that occurs to me is the month, April. It's considered to be one of the most symbolic months in the Satanic calender and past attacks and assassinations have also happened in the month of April, such as the Oklahoma City Bombing, The Columbine Shootings, The Koresh Massacre etc. There definitely seems to be something to these type of events happening in April.

I'm sure there are many other inconsistencies about this attack which would indicate this was a false flag attack.

The Army officer really doesn’t look anything like the victim pictured and we really don’t have enough details to make a determination yet. Also, what would the point of this “false flag” be? What is the end game? I might be more suspicious if there was legislation like NDAA or the Patriot Act on the table right now in US but there’s not. I’d also be more suspicious if semi-auto rifles were used but they weren’t.

I’m not seeing it…looks like an act of terrorism to me but to what end I don’t know.

posted on Apr, 16 2013 @ 09:23 AM
link
I can assure you that the injury's were real as stated by local surgeons and fellow coworkers that were in the recovery tent at the finish line. Two very similar people with similar injury's is all


Resentedhalo08, whatever it is its just another negative SAPIENS SAPIENS sign of the CHAFF of the WHEAT of EA*RTH and the potential Separations... Its sick and sad that the people of EA*RTH have to deal with this ignorance abroad. In time..

May GOD BLESS all harmed and dealing with this in these MODERN times. sad

I can't see where your going OP.... Where does the Jogger Card come in? You take a picture of your Illuminati bought jogger card and post it as evidence? Was that even found at boston?

You know if you stare at a rock long enoug you'll see jesus.~ Just sayin.

Originally posted by Resentedhalo08
reply to post by seabag

Maybe but I don't think that requires this type of incident to spur action.

I believe there are already security measures like you described at most indoor sporting events since 9/11 so expanding that wouldn't be hard to do even without a big disaster like this.

I guess we'll see what move this administration makes next.


Could you make the "comparison" pictures any smaller??

First big hint that it's someone trying to BS us.

Here's the two guys for comparison without the trickery...

Straight away it is clear they are two completely different people, look at the ear, the nose, the eyes.

The card implies that a jogger could be an assasin.

NOT that joggers would be the target of a bomb.

The straw clutching is incredible!


Your response is plain weird.The idea that people have to be patted down every time they walk or drive out their house is absurd.

A false flag operation is an operation set up by the government to promote a political and/or a military view.

I don't see this being the case with this horrible bombing, unless o0f course the government wants to introduce "pat down" to all citizens!!


The significance I see with the Jogger Card is this.


The Boston Celtics and their Green and Gold kit. The jogger on the card is in green and gold, which I believe is a link to Boston. And the Jogger being self evident.

The illuminati cards are believed by many to predict/show events that happen in the world, such as 9/11 and I also vaguely remember the BP Oil spill being depicted on one. So it stands to reason some of the other cards, such as the jogger card foretell such events.


Yes, in the pictures you posted it's clear that Nick has distinct ear shape that certainly doesn't match the other guy.

That's not to say the OP may not ultimately be right but the evidence presented is not going to further his case.


Well now that's just weird.... I stand corrected. My appologies, I can see where the card comes in. My first thought when I saw that card was. Security scanned the whole area prior to the marathon. Many of the Joggers carried bags. What if a Jogger was the assasin. Very logical and I can see this holding some truth. As far as the military pics. I can't say that they are the same person. You would have to get all the Joggers in on a false flag operation..... I doubt our gov't could pull that off on the civillian populace of Boston. But I might be wrong and they might have just posed the greated sleight of hand ever seen. SnF 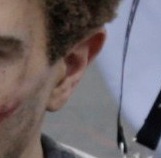 posted on Apr, 16 2013 @ 09:46 AM
link
People who jump to these conclusions of False Flag attacks are as bad as the people who are brainwashed by TPTB. We have one side who blatantly defends the establishment, and then we have the people who jump on the "this stinks to high heavens" bandwagon.

No critical thinking from either side, but yet both say either are brainwashed - When in fact, both of them have lost the ability to think critically.

Things will start to fall into place, lets not take sides right now. To me, it looks amateur, so I'm swaying with a real terrorist attack, but thats just my opinion and I'm willing to listen to other peoples educated opinion.

ATS: Deny Ignorance. Think about that before you press post.


A "Jogger" could well have been the culprit of this bombing, what better way to observe the carnage done than to masquerade as one of the runners and watch the carnage caused by the bombs previously placed. All it takes is a cell phone detonator and the cell phone in the pocket and mayhem ensues.

There's just a few things that do not add up here and that's what steers me into the direction of this being a false flag event.

in response to everyone in the marathon needing to be in it? that's not necessary, just a few well places stooges such as the military guy who ALREADY lost his legs and ofcourse the team who planted the bombs. Everyone else is innocent and gets killed and maimed in it all.

Another thing that doesn't sound quite right to me is this, apparently the bomb squad found the JFK library bomb in under an hour and did a controlled explosion, resulting in a small fire. How would they be able to find it so fast in all the resulting confusion etc?!


Nope, I was thinking that too Casualboy, the dow dropped 200pts at the time of the bombing... The way it played out, i'm not gonna say false flag as all the evidence isn't out on the table. I'm just looking for more information and where the great minds of ATS think... Can't dismiss thoughts as they are questions we all are having.


I doubt it's a false flag. No one immediately took responsibility for it. No one was immediately accused.

America is becoming a hot bed of shootings and home grown terrorism. Too much unemployment and income diversity creates social problems.