posted on Feb, 28 2013 @ 07:56 AM
link
This is a pretty awesome new tech they have come up with, and the potential uses for this tech are promising. But, like all helpful technologies, you bet somebody will use them for evil.

Boi-oi-oi-oing. Researchers have created a lithium-ion battery that keeps on working when stretched to four times its initial length--and bounces back into shape once you let go.

In the future, stretchy batteries such as these could help power solar-energy generating clothes, tattoos that monitor your vital signs, robot skin that's sensitive to touch and other futuristic, flexible devices, the batteries' creators wrote in a paper published today in the journal Nature Communications.

Think you can't get away from email now? Wait til even your clothes are electronic.

Aaanyway, we're not here now to talk about your digital life balance. We're here to talk about how cool this battery is. And it's pretty cool. It looks like a little chip, maybe the size of an SD card, and it's made of a translucent silicone rubber material stamped with aluminum and copper electrodes and assorted connections. Its creators, a team of engineers from China, Korea and Illinois, hooked the battery up to a red LED light and demonstrated that it continued to work when folded, twisted, and stretched to the size of small notepad, then pulled over an elbow, like a large Band-Aid.

The experimental battery charges wirelessly and works for eight to nine hours on one charge. It can be recharged 20 times without losing any capacity.

Researchers have been working on flexible and stretchable batteries for a few years now. In 2010, for example, we saw a bendable battery stuck on a piece of paper. This new battery is able to stretch four times more than other batteries scientists have made, its creators wrote. 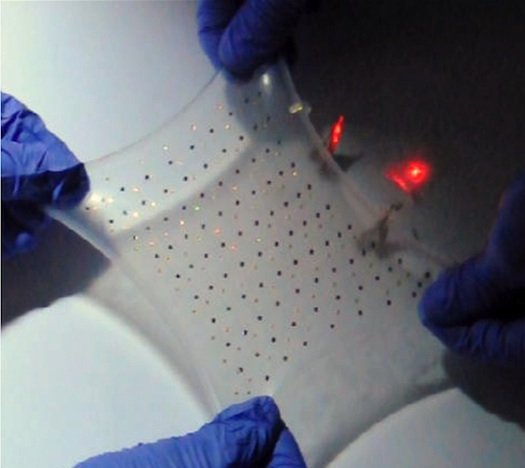 So this is a flexible battery, it can be stretched and probably shaped to an object. This saves on space and weight. With batteries like this, the possibilities are endless, it can be charged wirelessly, and can hold a charge for about as long as the standard lithium ion batteries.

I see this technology being used in future cellphones, tablets, and I see this being a very useful tool in space exploration/study. They could essentially use a large amount of these batteries, and still only use a fraction of the space required for older batteries. It seems each day something really cool turns up.

posted on Feb, 28 2013 @ 10:37 AM
link
There are plenty of unconventional battery concepts around (including flexible ones) but the reason most of them never make it to fruition is that their unique properties significantly reduces their energy density. A battery that has a comparably low capacity for its size is in most cases impractical. Looking at this design I get the impression that the energy density is very low and the article conspicuously neglects to say.


That may well be the case, and the article was pretty short. I vaguely remember I heard about this tech a year or so ago, so I figured I'd bring it here to get some more opinions since it has surfaced again.

That is a pretty small prototype, but I'm sure with more R&D they can use this concept for practical measures, if they can sort out any flaws.

posted on Feb, 28 2013 @ 11:27 AM
link
What they need to do is develop a battery that does this, but uses the energy from the constant stretching and reshaping action to re-charge itself. Imagine a tazer glove that recharges every time you go for another haymaker! I'd buy that for a dollar, so the saying goes.