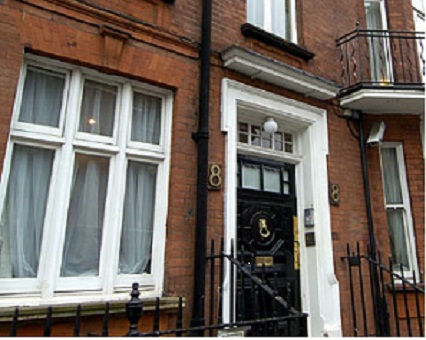 This seemingly drab normal and nondescript door may seem like an ordinary door but it is anything but, it is the portal to a world that we mere mortals can only dream off ever passing through. This door represents something of a dream for us ATSters, for it is the door of “The Club”, the “Special Forces Club” of London.

Located in Knightsbridge London, this is a London gentleman’s club like no other. It was founded by members of the Special Operations Executive in 1945 as a place for the kindred sprits of the Special operations community to meet for a casual nostalgic drink. The walls are said to be draped with the photos of the great and good of the British Special Forces community. Since 1945 the remit of the club has grown, it is not only members of the now extinct SOE who darken the hallways of this club but all members of the British Special forces and intelligence community even including some police officers.

Entry into this club has some rather strict requirements, firstly one must have been a member of British intelligence or Special Forces and secondly must have an extra £400 a year to pay for the subscription. Officers form foreign Special Forces and Intelligence agencies can also be permitted to join the club. There have been some journalists and authors who have been invited in as guests but for the most part this is strictly members only.

One can only fantasise at what secrets the walls of this exclusive club may harbour, this is the elite of the secret societies.

Anyway I just thought I would shear this with you all, information on the club is rather sparse but if you have any more information or even speculation about this club I would very much like to hear it. Who knows perhaps one of you reading this has a members card.


It would be awesome to drink it up with these guys and hear about their glory days...


I bet some of the convos taking place in there are worth more than any action movie ever made.


Thanks for info OP.

Now I know where I want to land and look! So...non-descript too. As a tourist, I could walk by it a dozen times and never suspect it was anything but a door to someone's home or private shop of some kind.


Thanks for that dude,

Now we all know where to plant our electronic bugs…..

posted on Jan, 19 2013 @ 04:20 PM
link
I imagine myself sitting around sipping on a scotch on the rocks, chatting it up and listening to all the crazy stories. As a kid I always wanted to be a "special forces guy", Maybe I read one to many GI Joe books.,, I'm guessing they don't meet up there for knitting sessions. Regardless, this is pretty awesome! Do you think James Bond would be to cool for this club?

Just think of all the Vets from WW2 til now.


Agreed it would be kinda awesome to spend a couple of nights at the bar just ease dropping to the old war stories.

Simple. Join the Special Forces and then you can.

Originally posted by khimbar
To everyone that made posts about how they would like to sit with them, and hear the stories.

Simple. Join the Special Forces and then you can.

Well to be honest that’s just too much like hard work for me, I have no intention of ever joining the military let alone Special forces, also I don’t have a spear £400 or live in London.


I'm guessing they don't meet up there for knitting sessions

I would love it if they did, just all sat round watching sex and the city.


True, but I think this club is much more exclusive.

Originally posted by resoe26
Us Airborne Rangers had a club.
It was at our barb-wired enclosed battalion.


We had one like that too - it was called Rick's Lounge on Hay Street. I hear they closed it, probably a biohazard.


It was moved to Bragg Blvd, and renamed to Mickey's. Most of the "ladies of the evening" moved there as well. Since most of them lived in Bonnie Doone, it's super convenient. There is a new one called the Pearl Necklace. Nothing more needs to be said.

You would not recognize hay st. Downtown went through a massive revitalization and now even has respectable shops and restaurants there.
edit on 30-1-2013 by network dude because: added new information about Fayettenam.