A Theory About How Ed Leedskalnin Built Coral Castle

He started out researching crop circles in 2005. He saw blueprints for a starship in some crop circles. He credits Tom Sutter regarding some work on the formations and Chris Hardeman regarding a gravity shielding experiment.

Here is a screenshot of a diagram illustrating his concept: In 2008, he heard investigative journalist Joe Bullard being interviewed on Coast to Coast about Coral Castle. Evidently Bullard talked about the numbers 7129 6105195. In 2009 Stride visited Coral Castle in Florida and the Grand Masonic Lodge in Pennsylvania, specifically Norman Hall. He sees a connection between the two.

He credits Jon DePew regarding magnetism in sacred geometry.

Stride used numerology to translate ADM for admission to the number 144. He says that 144 is an important number in this theory.

His theory is presented in two parts broken down into 365 individual slides. It is also presented in 3 videos. The 365 slides are only for the first video, which was uploaded in 2008. Stride points out on his website that the 2008 video has 3 inaccuracies:

Here are the links to the slides:

I hope some of you will have the patience to study this material and help me make sense out of it. I think he may be on to something.

I will have to watch them again though, but I have subscribed to your thread to find easier later.

I have seen Jon Depew's website and it's pretty awesome. The vids you have linked I've also seen. I do believe he did use advanced mathematics, Sacred Geometry, to build Coral Castle yet how he moved the blocks is what interests me.

Leedskalnin was into electromagnetic current. I think he used that to move these stones. There are various videos on youtube showing how you can move objects with magnets and some even made the device he used called the flywheel.
Here is a pic of it 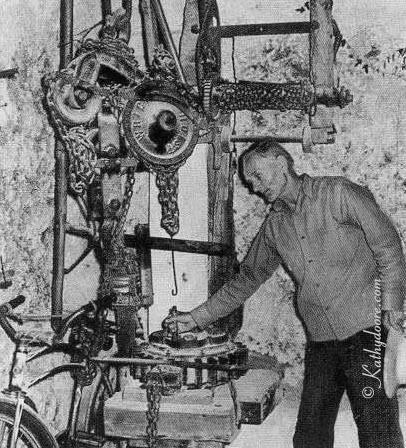 Leedskalnin imo was a smart man and he built Coral Castle out of love. It's amazing what love can make you do! I love the story behind it even though it doesn't have a happy ending. It's still sweet that this man spent his entire life building this place in the hopes to get his woman back.


I appreciate your interest! There is a massive amount of out-of-the-box creative analysis to go through, and, mathematics. I need all the help I can get!


Hello! Thanks for your response.

I've read other theories about what the "Sweet Sixteen" actually means. I can't remember what they are right now, though!

I understand that the flywheel is a rotating wheel of magnets that is part of a device to nullify the weight of the enormous stones Leedskalnin used. I still need to piece together what the rest of the device entails.

posted on Dec, 10 2012 @ 07:40 AM
link
I am always amazed at people thinking that coral castle was some feat of construction.

Masons have been doing this for millennia using "simple machines" and a little hard work.


Coral castle is a beautiful sculpture and is an excellent example of architecture, but there is no mystery as to how it was built.


There's really nothing mystical about Coral Castle, it was built by a man who came from a stone mason family and worked in lumber camps.

He himself said how he built it...

When questioned about how he moved the blocks of coral, Ed would only reply that he understood the laws of weight and leverage well.

If magnetism and geometry seems like an odd relationship, please read the book Shape Power by Dan Davidson to learn about the oddities that occur when combining rotating magnetic fields and geometry.

I see on the Pure Energy Systems website that Dan Davidson presented at the 2010 Tesla Tech conference, "Aetheric Science - The Next Frontier."

Here is the section on Dan Davidson in the article "ExtraOrdinary Technology conference 2010 report by Riversong."

Dan Davidson completed the conference program with many useful comments about the nature of ether, which pervades the whole universe and is an important component of most theories that indicate the possibility of more efficient energy generation. First, he emphasized the importance of spirituality in science. What appears to be empty space is actually filled with ether, which is difficult to detect partly because it moves with the Earth. He went into some detail about a few experiments that had in the past indicated ether doesn't exist, which is contrary to both ancient and contemporary observations. It has also become evident that the visible light spectrum is actually a fractal formation that repeats up and down the electromagnetic spectrum. This has a lot of implications both for energy and communications.

I am very intrigued with the idea of the visible light spectrum actually being a fractal formation that repeats throughout the EM spectrum.

posted on Dec, 10 2012 @ 08:22 AM
link
The story of Coral Castle intrigues me to no end as well. I've been looking into research on the machine and tried to read Ed's books but without a bunch of magnets to play with and do what the book is telling you hands on its very hard to grasp. Also I've seen a few people build machines(they're available on eBay lol) but to all I've looked through everyone focuses on the machine and ignores the importance of sound.

images.fineartamerica.com...
edit on 10-12-2012 by Shadowcast because: Cant get pic to embed from mobile

Excellent point. I'll be looking for references to sound as I continue studying this material.

I suspect the Science forum has threads on cutting-edge research regarding sound.

posted on Dec, 10 2012 @ 08:54 AM
link
I see on his website that he has shifted from making videos to posting articles. Here is the beginning of a post dated December 2, 2012 entitled "Prime Revelations and The Future":

Hello good people of the world:

It has been a long time since I have published new material. I have decided against producing another video due to time constraints, so instead I expect to post pages like this one here on the website. . . .

I would like to disclose the following highly significant revelations:

3 dimensional reality is clearly being defined in the first 7 prime quadruplets. . . .


I understand your point, but there is much, much more to this theory than that, although I'm just beginning to study it.

I have recently gathered from my research on Tesla technology that his wireless electricity would have been sent through the atmosphere by sound waves but then converted to EM waves at the destination - or something like that.

The following screenshot from the article provides a glimpse of what he's talking about comparing Coral Castle to Norman Hall at the Grand Masonic Lodge in Pennsylvania. This is a close-up of a section of the flywheel and one of the ceiling tiles:

That's what he's talking about here:

Originally posted by Mary Rose
I understand that the flywheel is a rotating wheel of magnets that is part of a device to nullify the weight of the enormous stones Leedskalnin used. I still need to piece together what the rest of the device entails.

From the 2nd video, I've gathered that apparently the rest of the device consisted of:

I would also like to clarify that at no point does any stone physically get carried on top of the flywheel. Some have come away with this misunderstanding and it is the result of thinking through classical Newtonian laws – and of course we know now, and have known for a long time, that the universe is much more interesting than that.

posted on Dec, 10 2012 @ 01:00 PM
link
I watched a show about coral castle and in the show it referred to a black box that was atop the mechanism used to move the large blocks. Upon his death the box went missing. Any theories about what it was used for, what was inside it, or where it went?

I don't know anything about the black box. My research has not connected up with it yet, although it wouldn't surprise me if it was holding radio equipment because ultimately radio waves do seem to be involved.

Regarding numerology, Ed often encodes numbers in his words. There are a few different ways he does this. Many times large numbers are encoded in a way where the number value of each letter in the word will be multiplied together.

The thing to realize about Edward Leedskalnin is that his whole life was devoted to encoding the information in his various works, and everything he did had two meanings - one public, and one hidden.
edit on 10-12-2012 by Jeremy Stride because: (no reason given)