posted on Nov, 30 2012 @ 08:57 PM
link
My super conservative aunt posted this article on my social media, which you can find here:

Politicians looking for savings to deal with the national debt crisis should perhaps start by abolishing the President. Barack Obama and his family cost the taxpayer $1.4billion per year, according to a recently published book. By contrast, the British Royal Family costs less than $60million each year.

Two of the principal costs of the the Obama presidency - and any other presidency - are staffing and security, according to Robert Keith Gray's book Presidential Perks Gone Royal.

When it comes to keeping the First Family safe, few would dispute that it is worth paying a high price to keep the President safe from harm.

More...
Now it's getting REALLY dirty: Outrageous film claiming Obama's mother once posed for pornographic pictures is sent to a million swing voters

This means paying for hundreds of Secret Service agents, travel in the secure space of Air Force and funding a team of doctors to follow Mr Obama around.

But even this essential expense can be exploited to political ends, according to Mr Gray, a former staffer for Dwight Eisenhower, Richard Nixon, Ronald Reagan and George H.W. Bush.

Air Force One: The presidential jet is one massive White House expense
When the President travels around the country on campaign, he is obliged to take Air Force One.
His party reimburses the taxpayer with the cost of a first-class air ticket per passenger - but this is far from the full cost to taxpayers.

It also provides a President running for re-election with a national transport network which is unavailable to his challenger.

Moreover, much of the money spent on Mr Obama's family goes to perks such as entertainment and household expenses.

For example, the White House contains a movie theatre which is manned by projectionists 24 hours a day in case one of the family feels like a trip to the cinema.

And even the Obamas' dog Bo costs the taxpayer thousands of dollars - his handler is reportedly paid over $100,000 a year.

Another huge presidential outgoing, according to Mr Gray, comes in the form of staff members who can be appointed by the commander-in-chief at his own personal discretion.

226 members of Mr Obama's staff are apparently paid over $100,000 - and the President can increase their salaries at any time.

I was looking for any information online to find the veracity of these statements, and they all link to the book Presidential Perks Gone Royal: Your Taxes Are Being Used For Obama's Re-election by Robert Keith Gray.

What's interesting is some people have commented on the book that Gray doesn't cite his sources, which makes it hard for me to believe what he has to say.

I'm actually kind of curious what the truth is because if this is true, that's way too much money to be spent on a president. If I were president, I would be ashamed to know that much money was being spent on myself and my family. I'm also curious what the White House has to say to these claims, but unfortunately I couldn't find anything about that. It's like it's pushed under the radar, and it only pops up on Fox News and random conservative sites. I'm actually surprised it wasn't posted here.

ETA: I don't trust the figures here, but the spending for protection and travel of Obama and his family is obviously high. But we should spend every dollar we need to keep the POTUS safe...

I stopped reading after the pornography stuff

And even the Obamas' dog Bo costs the taxpayer thousands of dollars - his handler is reportedly paid over $100,000 a year.

If this is true, this is utterly disgusting and just plain ignorant !!!!!

Hell, I'll be his dog handler for that kind of money.

Why can't he use his own money to take care of his dog?
They didn't need one to begin with in my opinion.

posted on Nov, 30 2012 @ 10:03 PM
link
This falls into the same category as Obama spending a billion bucks, and using half of the Naval fleet, just to go on a diplomatic mission to India. Turned out to be complete BS.

If there are no sources to back-up this claim, I would dismiss it.

Some people that politically disagree with Obama will say anything to sell a book, or plug a website. (see WND, Orly Taitz and the Birther issue)

posted on Nov, 30 2012 @ 10:11 PM
link
A quick look reveals that the story originated from the dailycaller.com. They have somewhat of a bias to the Right and I would be apprehensive to believe anything they have to say that is not backed-up with real data.

posted on Nov, 30 2012 @ 10:14 PM
link
Hey, OP. I think you misplaced your thread in the wrong section. Don't worry, we all make mistakes sometimes. There is no need to be embarrassed. To err is human, am I right?


1.4 billion could easily be lived of for a lifetime and you'd still live very comfortable, why not just go without for the rest of the term and help pay back some of the debt everybody else is paying for. assuming it's true.

then again what if that 1.4 billion is going back into your economy and keeping people in work.

posted on Nov, 30 2012 @ 10:22 PM
link
In fairness to the OP, they did say that they were suspect of the validity of the story. So let's not bash them for bringing this to our attention.

I'm not saying anyone is being too critical....I'm just saying.

posted on Nov, 30 2012 @ 10:22 PM
link
Well, it's a creative OP, I suppose....if trivia to what the branches of Government actually cost is the point. To Obama personally though, I miss the meaning entirely? His wife's vacations have irked me a bit but only by the friends and ...finding ways to actually list people as staff who aren't. To come up with these numbers though, it's including everything down to the guy mowing the grass and painting the fence on the White House Grounds.

Umm... Okie... That's interesting knowledge, as noted, but blaming him is blaming the very concept of the Office of President. If we don't have one, then what does run things? It's all kind of absurd outside that strictly trivia interest.

General: That's right, sir. The plane will be invisible. Will you be going along on its maiden flight?

Obama: I wouldn't miss it for the world.

General: Have a good trip, sir. 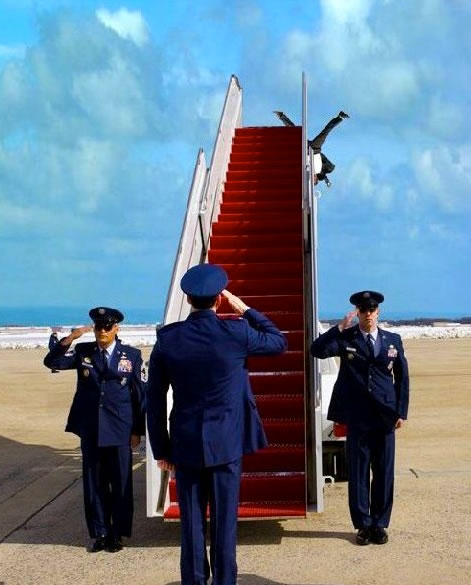 The real answer is exceedingly complicated. In addition to the annual congressional budget for the operation of the White House, there are over 22 other budget accounts, in 13 different departments, that pay the expenses and salaries of the White House staff.

Nothing to see here folks move right along.

Originally posted by neo96
Better believe it of course it is easier just to say it isn't true than do a little research like oh say:

The real answer is exceedingly complicated. In addition to the annual congressional budget for the operation of the White House, there are over 22 other budget accounts, in 13 different departments, that pay the expenses and salaries of the White House staff.

Nothing to see here folks move right along.


really now what about a pdf link from the article you posted? lol

and not likely to be cut for the sake of the budget either
anybody have the numbers for congress?


Was that supposed to be a joke?


I have been curious about the dog handler's supposedly pay of $102,000 so I've been trying to find a different source and came up with this, not sure if it helps:

Some say life is for the dogs. So in that regards, President Barack Obama has used taxpayers’ money to pay the salary of a dog trainer , who doesn't even work full-time, but is just on retainer in case of so-called ‘dog-training’ emergencies.

If this is true, this just irks me to no end.

Why even have a dog if you have to "hire" some one to take care of it.
Just because he was elected president in 2008 didn't mean he HAD to have a dog to go into the White House.
Or is that the new requirement ? To be president you have to have a dog [which was a gift from Teddy K.]

Maybe this is just a misprint......or rather miscalculation.

its a very simple con-trick to attempt

Originally posted by Trustfund
reply to post by Trueman


Was that supposed to be a joke?


What made you think that?