Barge Transportation Could Stop on Critical Mississippi River in December

posted on Nov, 25 2012 @ 09:30 AM
link
The developing situation on the Mississippi river, due to the drought that blistered the U.S. this year, has had a significant impact on waterway transportation. The Army Corp of Engineers announced earlier this month that it would be reducing the outflow from Gavin's Point dam in order to protect the Missouri River basin, which feeds the water level into the Mississippi river.

On November 8, 2012, the American Waterway Operators issued a press release calling on Congress and the Administration to address the ongoing problem that could result in negative side effects on our national commerce.


Water releases from dams on the upper Missouri River are planned to be significantly scaled back later this month and these reductions are expected to negatively impact the Mississippi River water level between St. Louis and Cairo, IL beginning December 1. Of particular concern are hazardous rock formations near Thebes and Grand Tower, IL, which threaten navigation when water levels drop to anticipated, near historic lows. The rock formations, combined with the reduced flows from the Missouri River, will prohibit the transport of essential goods along this critical point in the river, effectively stopping barge transportation on the middle Mississippi River around December 10.

The American Waterway Operators is a national trade association for the U.S. tugboat, towboat and barge industry. They are responsible for various economic, environmental and safety standards throughout all waterborne commerce in the United States.


Welcome to the Web site of The American Waterways Operators, the national trade association for the U.S. tugboat, towboat and barge industry. The photos on this page represent the diversity of the industry, including coastal and inland towing and ship assist operations. Please visit our Vessels Tour to see additional photos and learn more about the safe, most economical and environmentally friendly way to move America's commerce. Thank you for visiting our Web site and for your interest in America's tugboat, towboat and barge industry.


"The Mississippi River is especially critical for the agricultural community, moving 60 percent of our nation’s grain exports. Closure of the Mississippi next month would mean that about 300 million bushels of agricultural products worth $2.3 billion will be delayed reaching its destination," echoed George Foster, President, JB Marine Service, Inc. in St. Louis.

On November 23, 2012, the Corp began reducing the outflow from the Missouri river into the Mississippi river. The outflow being released from the dam in terms of cubic ft per second was 37,500, after the first planned cutback the amount was reduced to 35,500 cubic ft per second, and by December 11, the outflow will be cut back to 12,000 because of the drought.


The flow is being reduced despite opposition from the governors of Missouri and Illinois and 77 members of Congress whose states are along the Mississippi River. Scott Holste, a spokesman for Missouri Gov. Jay Nixon, a Democrat, said his office never received a reply to a letter Nixon sent Army Assistant Secretary Jo-Ellen Darcy to ask that the corps delay plans to reduce the Missouri River flow.


S&F for all your information and time that went into this thread.

Thanks for sharing, I had no idea that this was an issue.

I know this has happened before, but this drought is definitely worse.

Thanks again for sharing. Now that you've got me interested I want to keep an eye out for more info.

posted on Nov, 25 2012 @ 10:16 AM
link
I have a feeling this problem is only the begining..
this is like a slow moving wreck that just doesnt seem to be getting much attention.
A major river in the US is slowly drying up. a river used for transportation.. more importantly
this river is a indicator of drought.
Next year may be worse


Yes but only of drought in the US.

We have way too much water. I wish we could send you some! 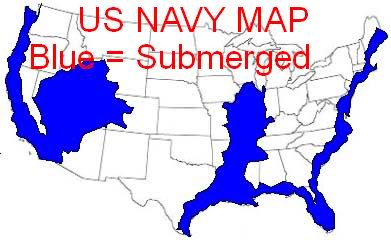 Originally posted by PuterMan
reply to post by Lil Drummerboy


Yes but only of drought in the US.

We have way too much water. I wish we could send you some!

Yes and I live close to lake Michigan.. but that is of no use to crops..
we are already getting warnings of next years food price increases due to this
last years droughts..
another example,, the colorado river hasnt been what it used to be either,,
Hover dam water level is quite low also,, their in flo is low.


the map is utter twaddle 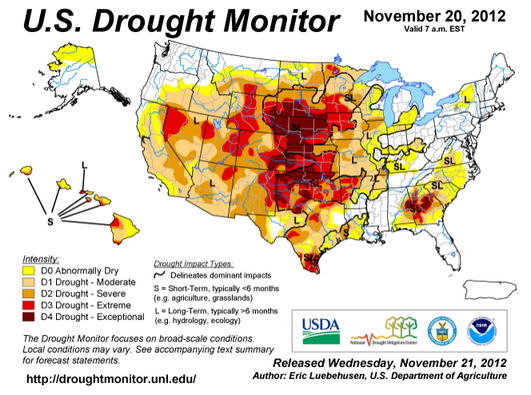 We shouldn't still be suffering severe drought conditions in December. Yet, here in Southwest Missouri I can tell you I haven't seen a snowflake yet and only a little rain. A couple downpours and drizzle mostly since Winter began.

If this doesn't turn? Well... I'm betting if electronics had existed at the time, that is roughly what the graphic would have looked like for the starting period of the Dust Bowl years. Bad times....

posted on Nov, 25 2012 @ 08:07 PM
link
Thanks for posting this. I have a thread about the droughts and the probable effects on food prices later this winter and into spring. The data on the Mississippi just kinda puts that into perspective. When the "Mighty Mississippi" isn't so mighty...that doesn't bode well.
edit on 11/25/2012 by Jeremiah65 because: (no reason given)

posted on Nov, 25 2012 @ 08:20 PM
link
I thought they were doing it to have more drinking water available. I would defiantly choose drinking water over the livelihood of a tugboat operator. While not as efficient there is always trains and trucks to transport goods.

posted on Nov, 25 2012 @ 11:09 PM
link
I believe Hank Williams, Jr. did a song about this situation once. #ACountryBoyCanSurvive
Apocalyptic country at it's best.

posted on Nov, 26 2012 @ 07:54 PM
link
maybe if they were not using billions of gallons of fresh water to frak, there would be some left-over for the rivers

posted on Nov, 27 2012 @ 06:18 AM
link
This happens in Australia on a nauseatingly regular basis. We used to use our Murray-Darling river to transport goods but it is impossible now. Sometimes the river stops flowing out of its mouth all together. We have to pay for trucks and trains to internally transport our wheat, wool and animals. Sea transport is (or was) 9 times cheaper than land transport. At least you still have the Great Lakes that come half way in to your agricultural land. In The Wealth of Nations, it is these sort of things that make the difference between a big economy and a smaller one.